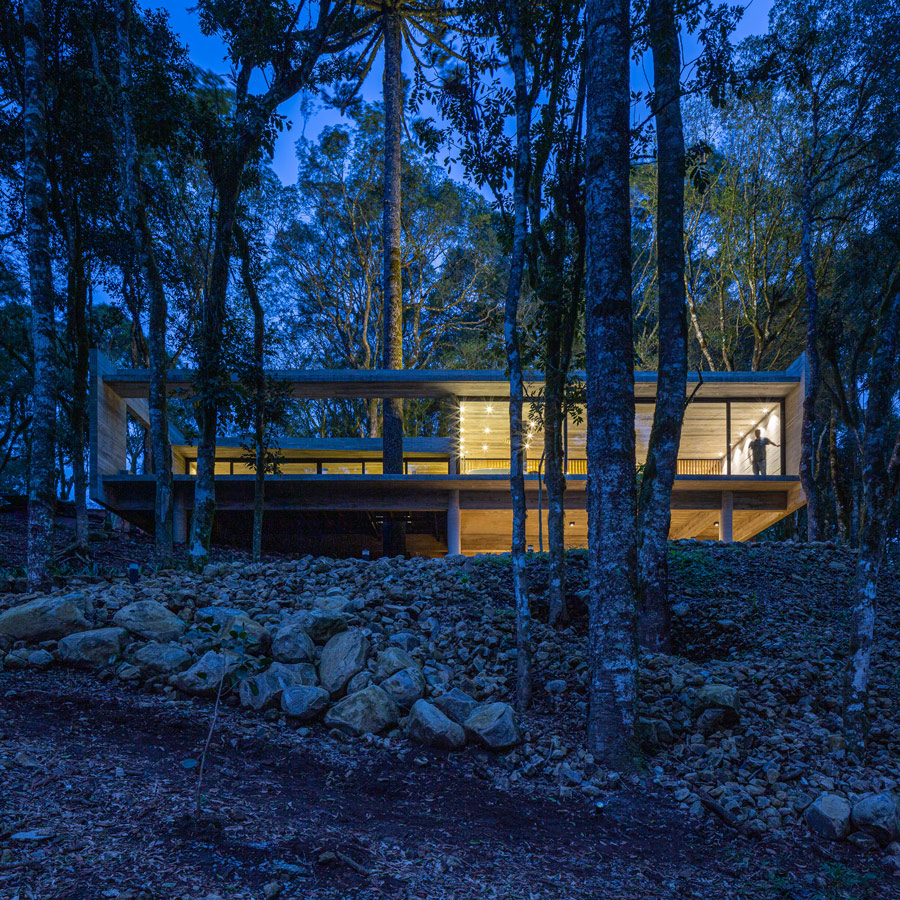 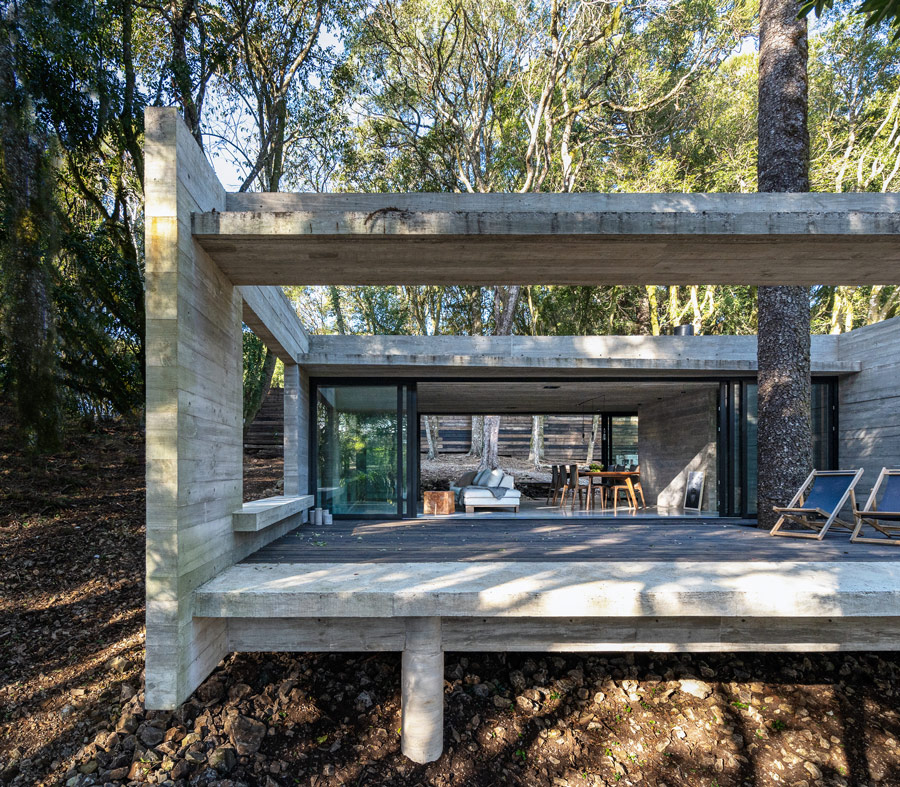 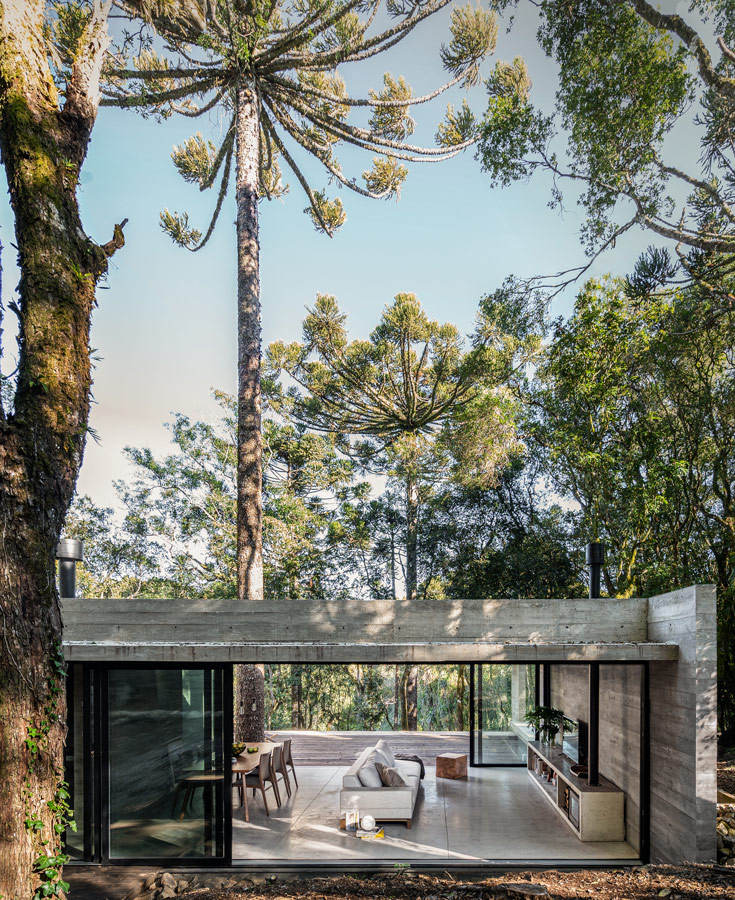 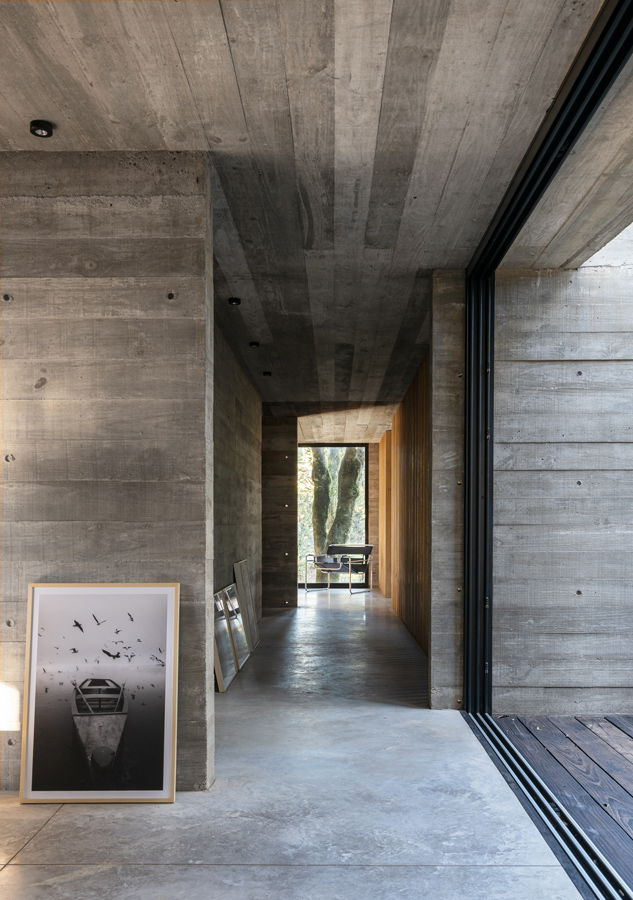 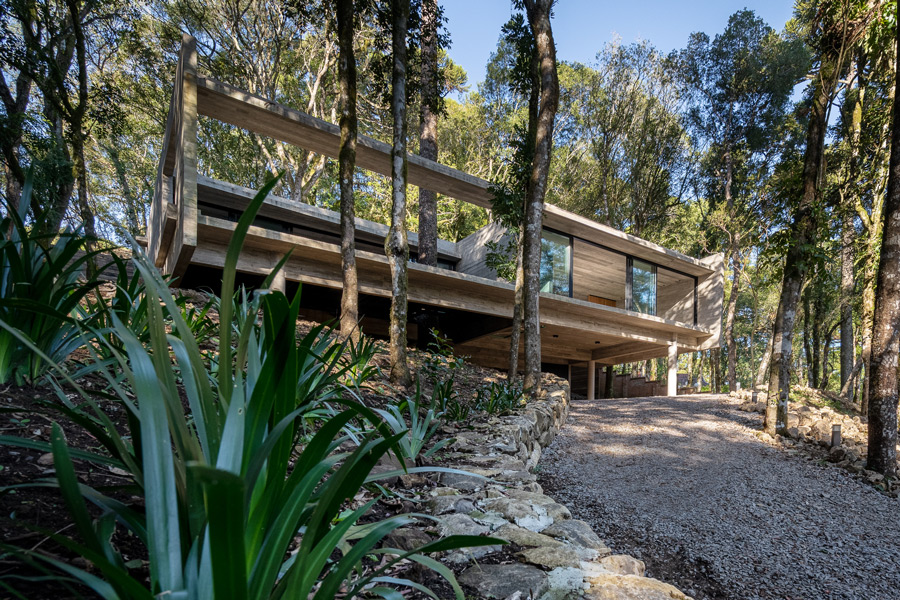 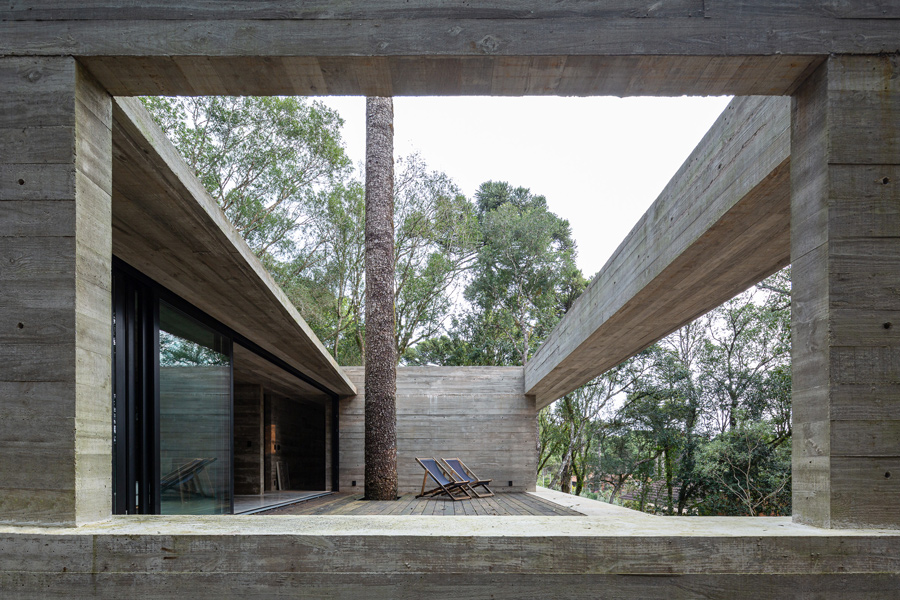 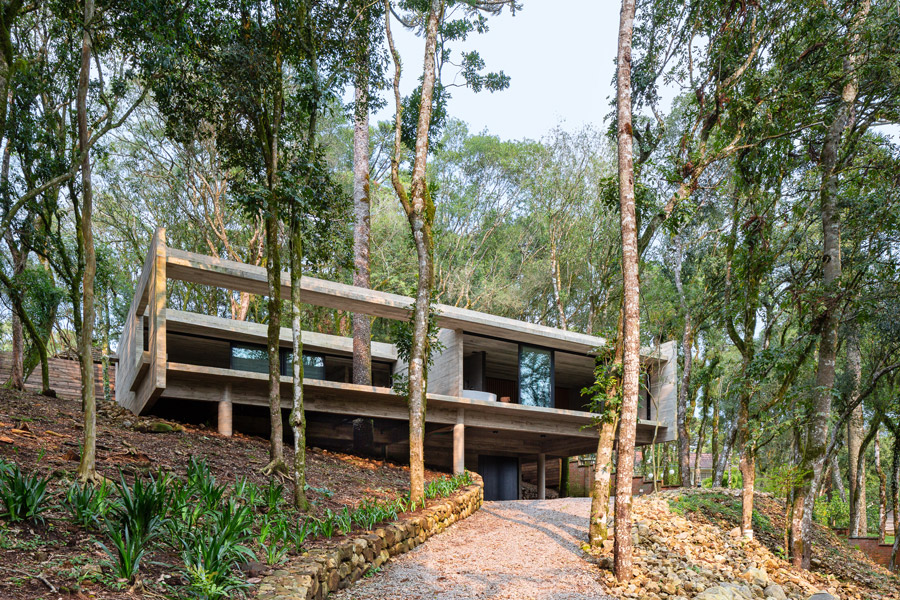 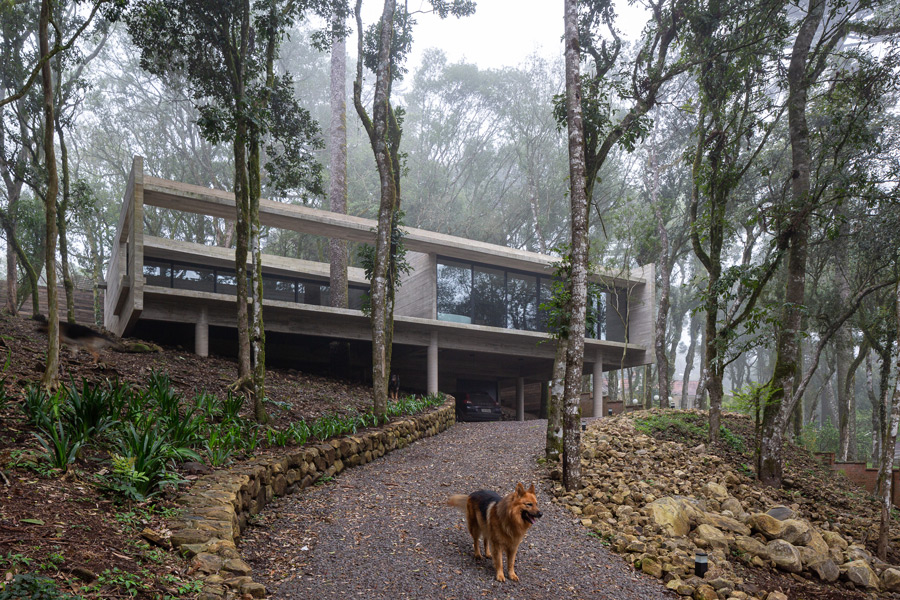 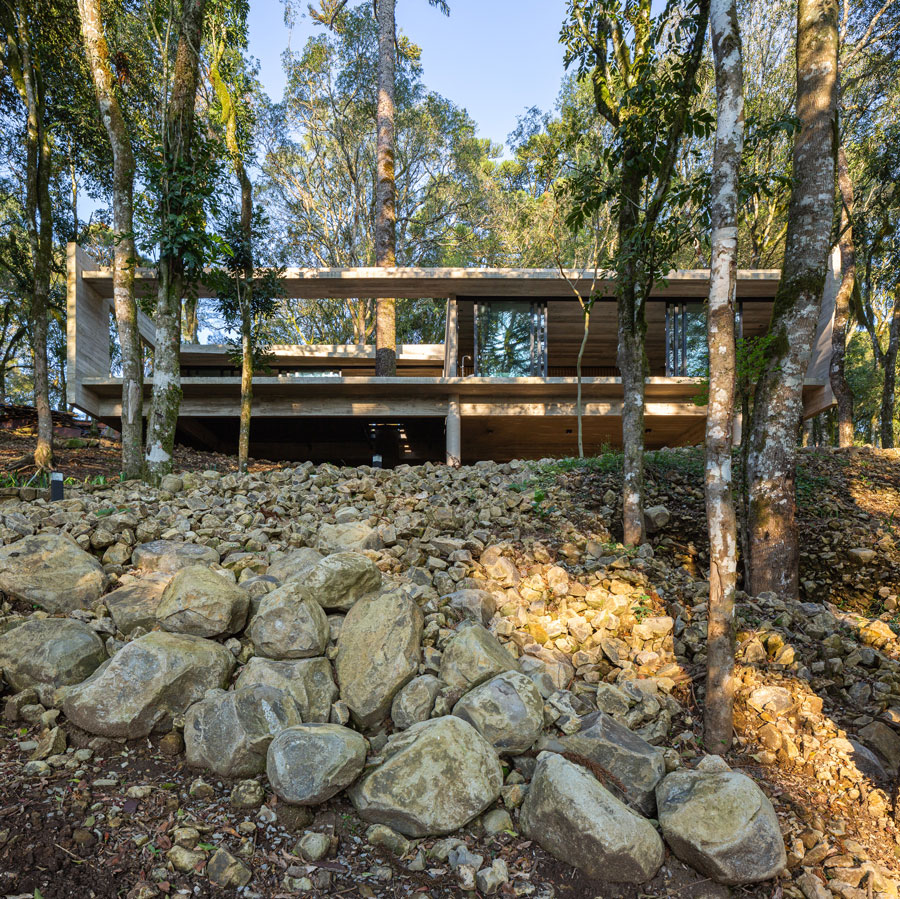 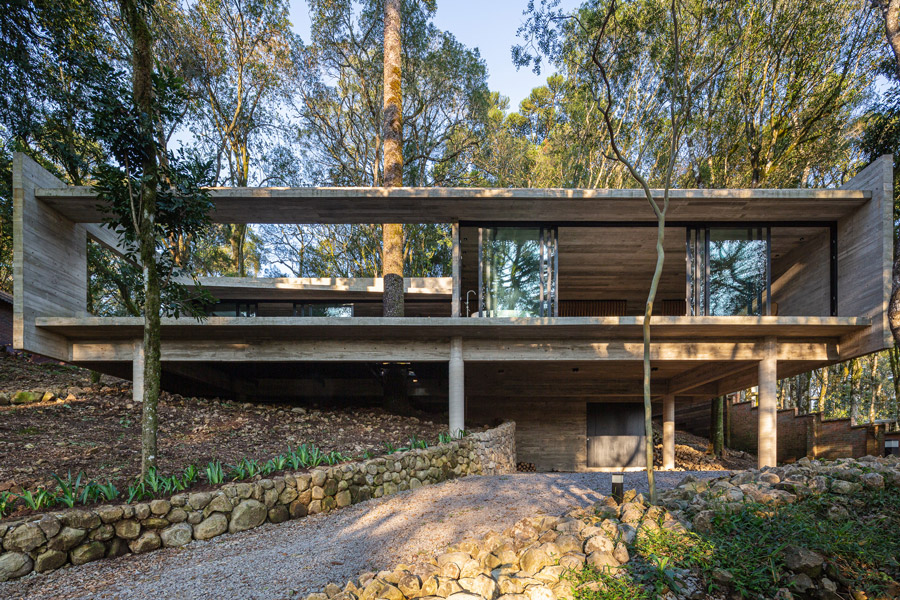 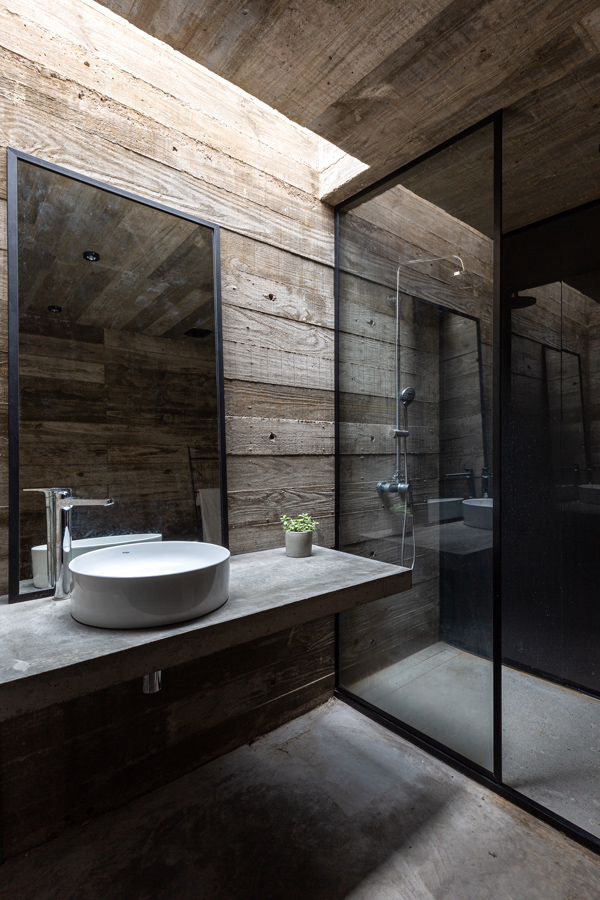 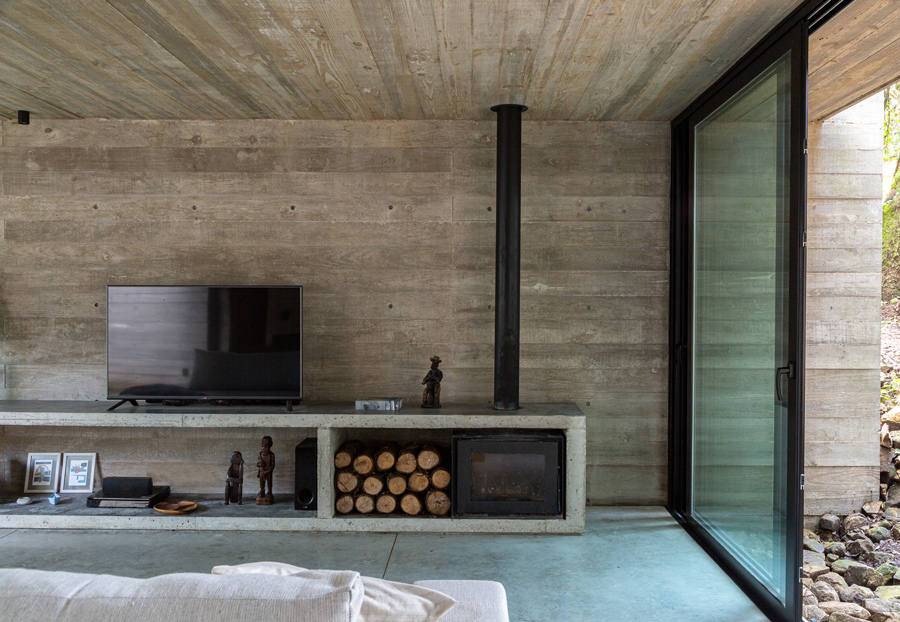 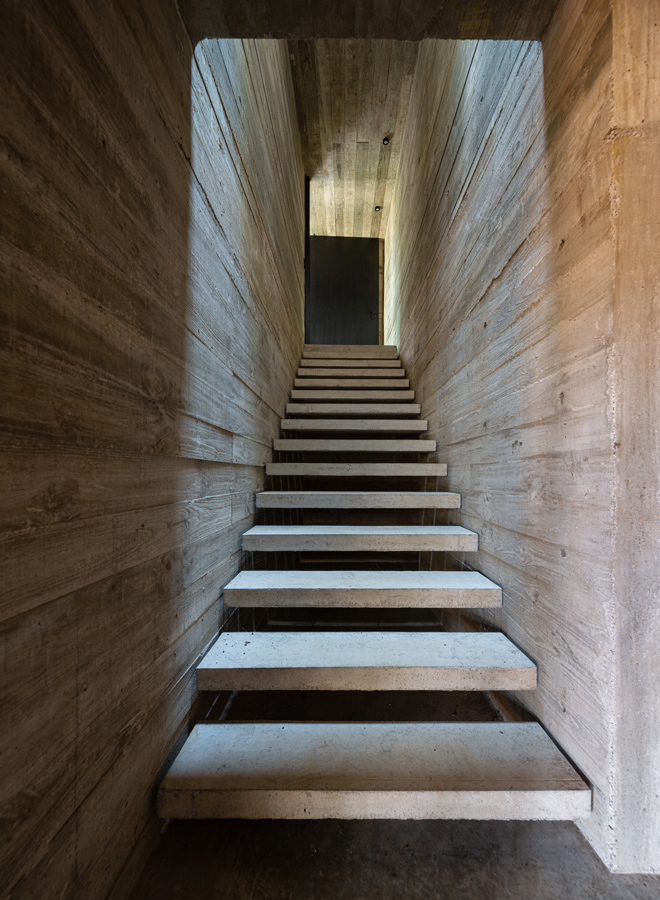 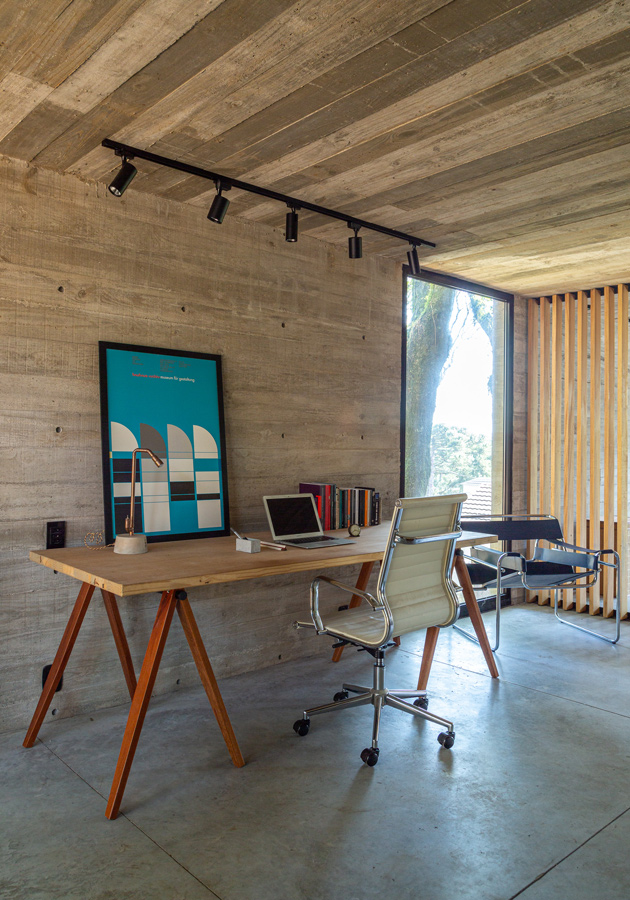 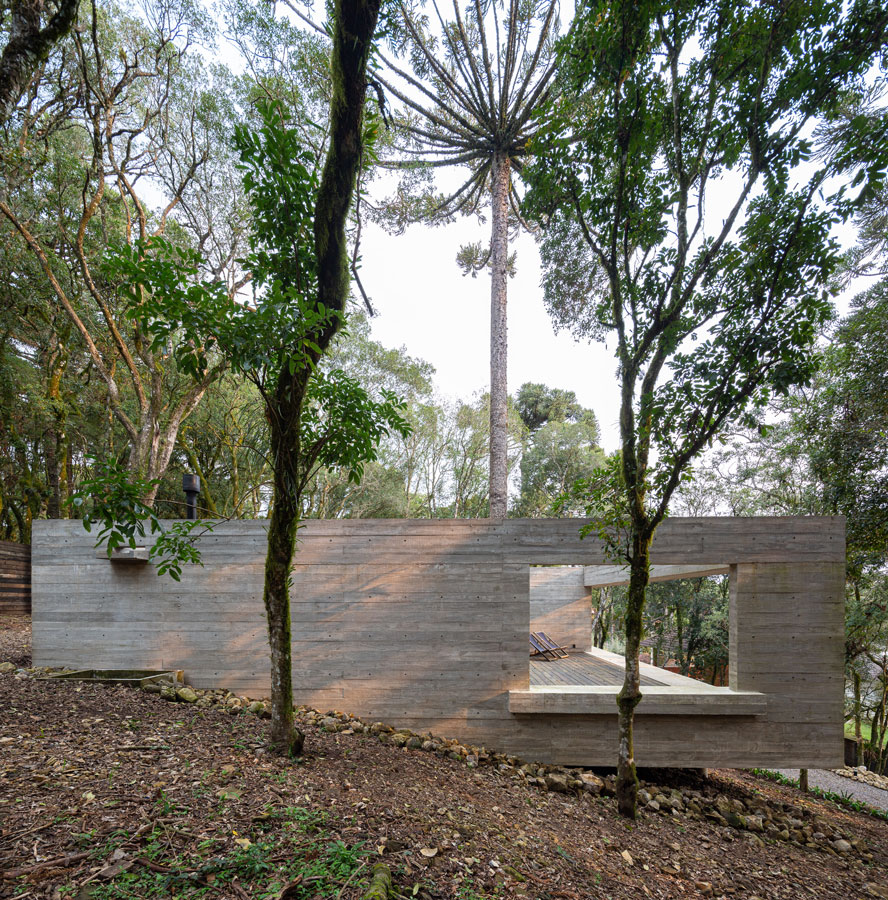 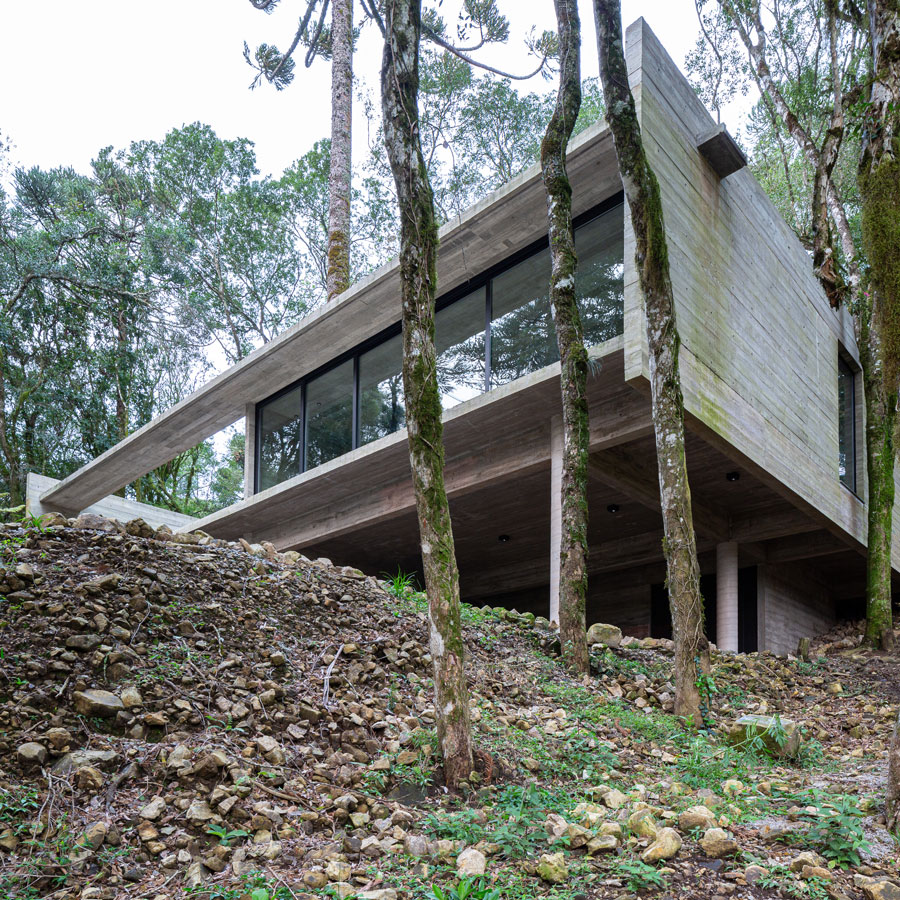 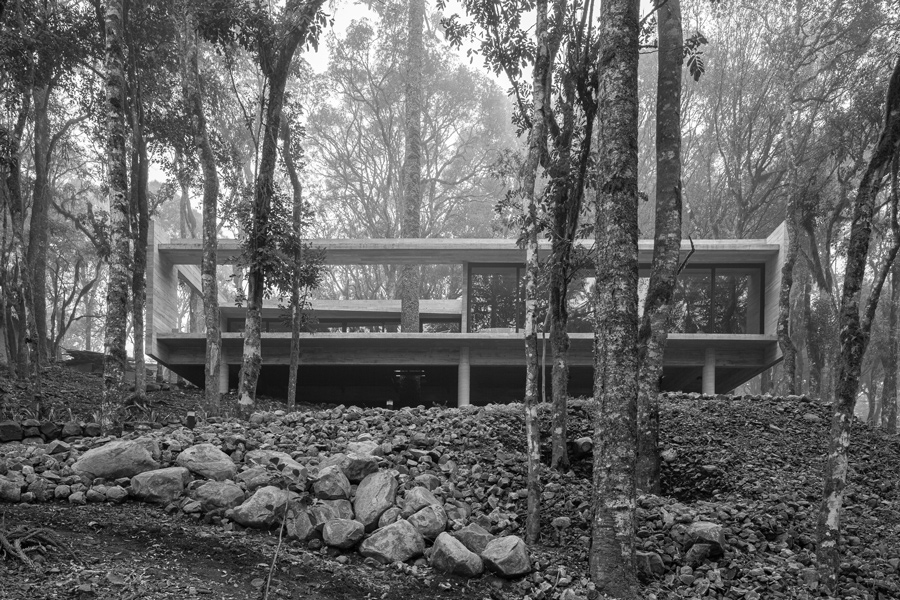 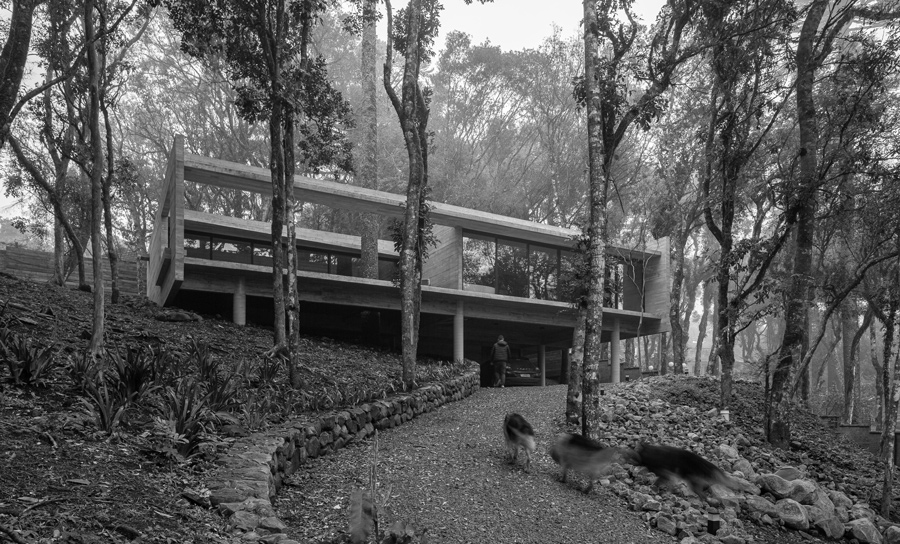 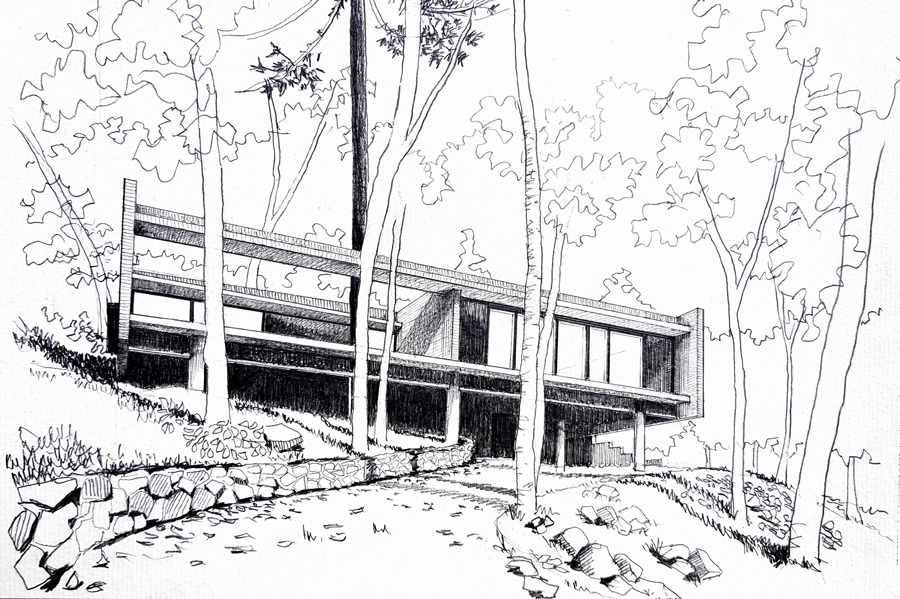 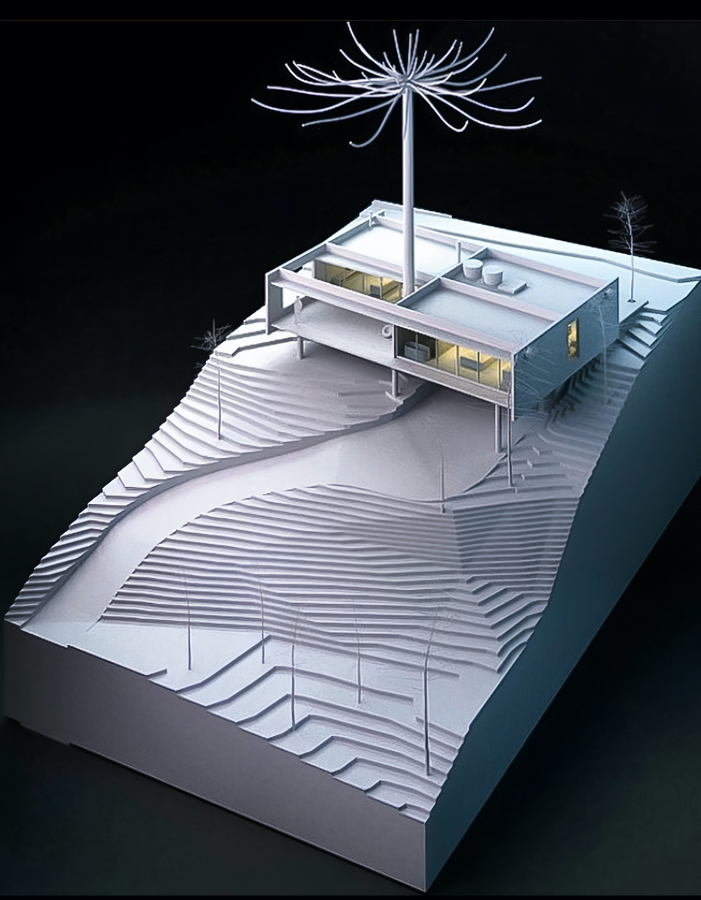 Fortunata House, one of the 20 projects nominated by the Institute of Architects of Brazil to represent the country in the 3rd edition of the Oscar Niemeyer prize. It was also awarded the 8th Saint-Gobain Architecture Prize. These merits make Luciano Lerner Basso's work one of the highlights of the new generation of Brazilian architects.

FORTUNATA, adj. fem. from the Italian language: one that has been touched by luck. A house built around a tree, where reason is the main instrument in the search for the spirit of living. Located in the extreme south of Brazil, Fortunata house is a project that highlights the essential activities of Architecture: the careful reading of the environmental conditions; the precise determination of the construction processes; the correct resolution of the program of needs; and
the harmony of the built forms.

Built in a traditional, open neighbourhood, the house was implanted around a huge Araucaria angustifolia tree - endangered species. The access from the pavement to the entrance of the house is through a winding path of dirt and gravel, the street enters the courtyard and extends to the entrance door. There are no walls, only a diaphanous metallic screen. There is the intention that the terrain of the house should be the same as that of the city; the desire to create urban
spaces without barriers, to integrate the public and the private.

Its insertion in the landscape is a direct response to the constraints of the place. Aiming for a minimum intervention in the topography, the main volume is supported by a pilotis that delicately touches the ground and adapts to the natural conformation of the terrain. All the material resulting from the excavation of the foundations was used; the earth was used as an embankment for the vehicle manoeuvring area; the stones were used in the construction of the retaining walls and landscaping elements. The native vegetation was preserved practically in its entirety. If it were possible for a huge crane to lift the house and set it down somewhere else, the original terrain would remain practically intact, with no trace of the construction work.

Designed for a young couple, the programmatic division of Fortunata is simple: on the lower level, under the pilotis, there is a car shelter; entering the house is the vestibule and the laundry room. On the upper level, from the geometric union of four rectangles, a structurally open plan was designed, where the separation between the functions of living, working and sleeping is given by the spatial condition generated by the server nucleus and by the use of light elements. There are
no dead-end corridors or closed conviviality spaces. The circulation occurs in a continuous movement that permeates flexible and multifunctional rooms. A condition that allows the house to assume different configurations and to accompany the owners' changing lives.

Completing the programme, three verandas built using the wood used in the concrete formwork connect the house to the back patio; they expand the living room towards the landscape. Without curtains or visual barriers between inside and outside, the inhabitant has permanent contact with nature. At the same time that he inhabits the house, he also inhabits the nature.

The exposed reinforced concrete is used as a total material. It is in the structure, in the closings, in the stair steps and even in the fixed furniture. It is a material which ages with the same beauty as nature, withstands the weather well and requires little maintenance, even in the humidity of the forest. Besides, it is a very common system in the region, with plenty of skilled labour and construction costs lower than other systems with the same virtues. A structure that shows itself raw and reveals a construction process that, at the same time that is rigorous and precise, also shows the perfect-imperfections of a handmade work. A structure where matter and technique are indivisible.

Regarding the sustainable aspects of the Fortunata house, besides the minimum intervention in the existing vegetation and topography, we underlinethe use of reforested wood in the concrete formwork; re-use of this wood for the construction of the verandas; cross ventilation in all environments of continuous use; high performance frames with thermal cut-out; insulated double glazing; thermal insulation with EPS in the floor and roof slabs; treatment of the exposed concrete with solvent-free products heating system powered by ecological fuel; use of rainwater for irrigation; natural lighting in all rooms, including the use of skylights; and artificial lighting made entirely with LED lamps, including automation to control external lighting.

On the built lines, the geometry only rests on the terrain. We designed a silent architecture that maintains a frank dialogue with nature, either through its opaque walls that in the harsh southern winter blends with the fog, either by the way the forest is reflected in its glass on days of blue skies. Its plastic quality resides in the relationships between planes, voids, luminance, landscape and textures. A project that expands the field of architecture itself and brings reflections on the relationships between house and city, between man and nature.