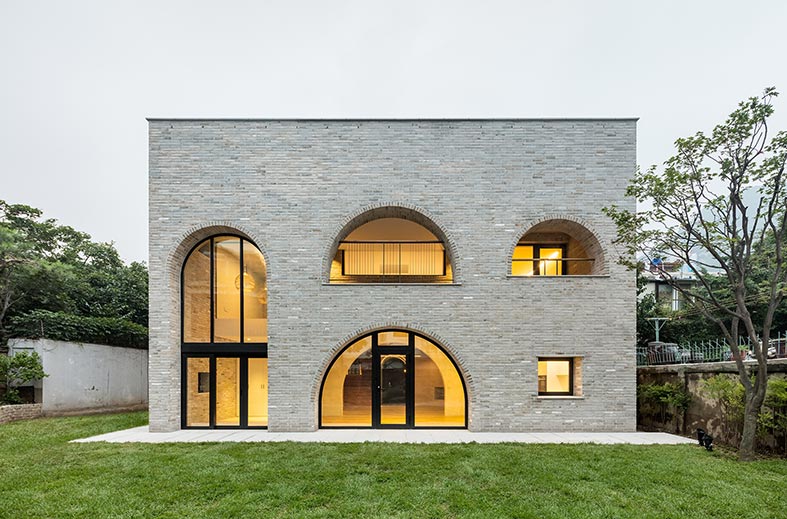 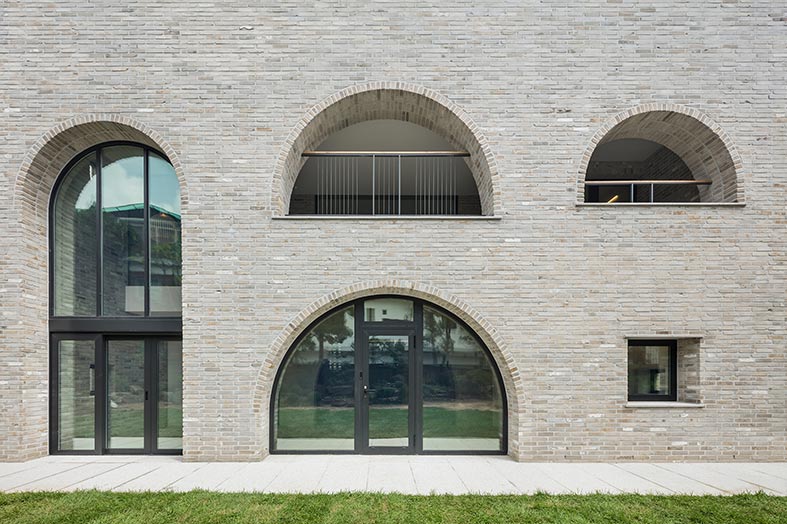 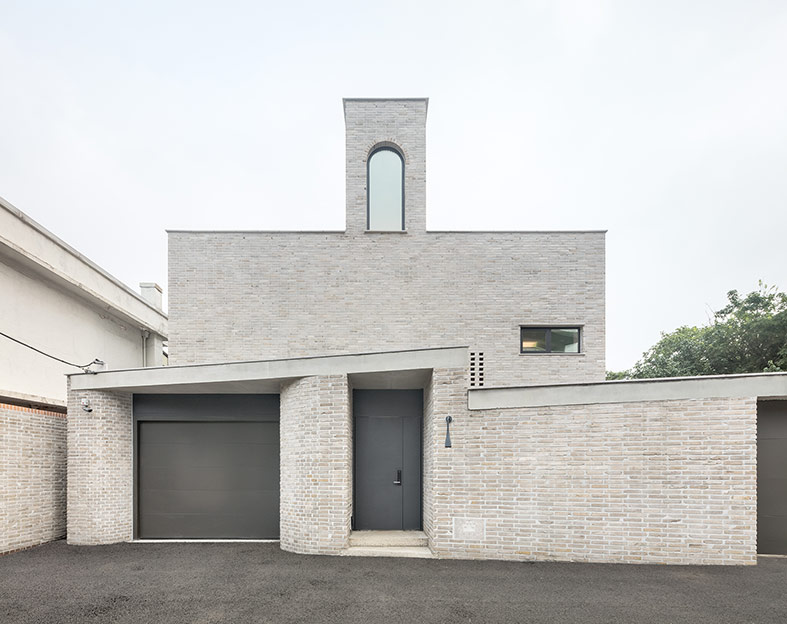 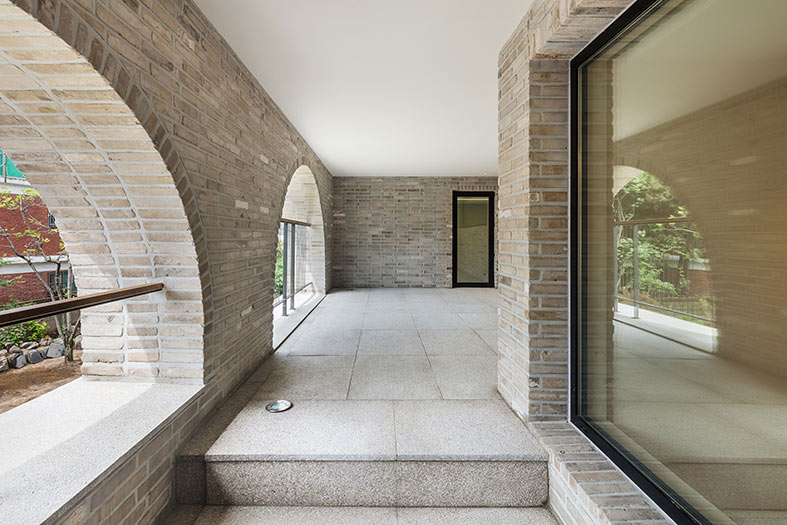 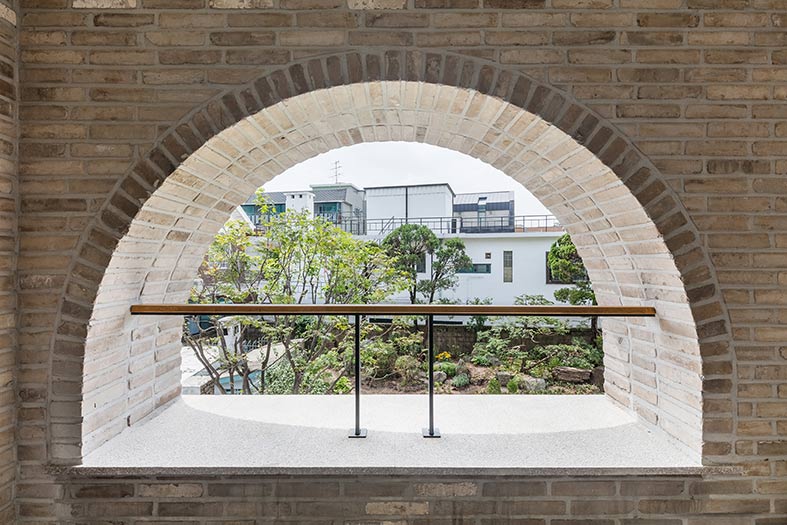 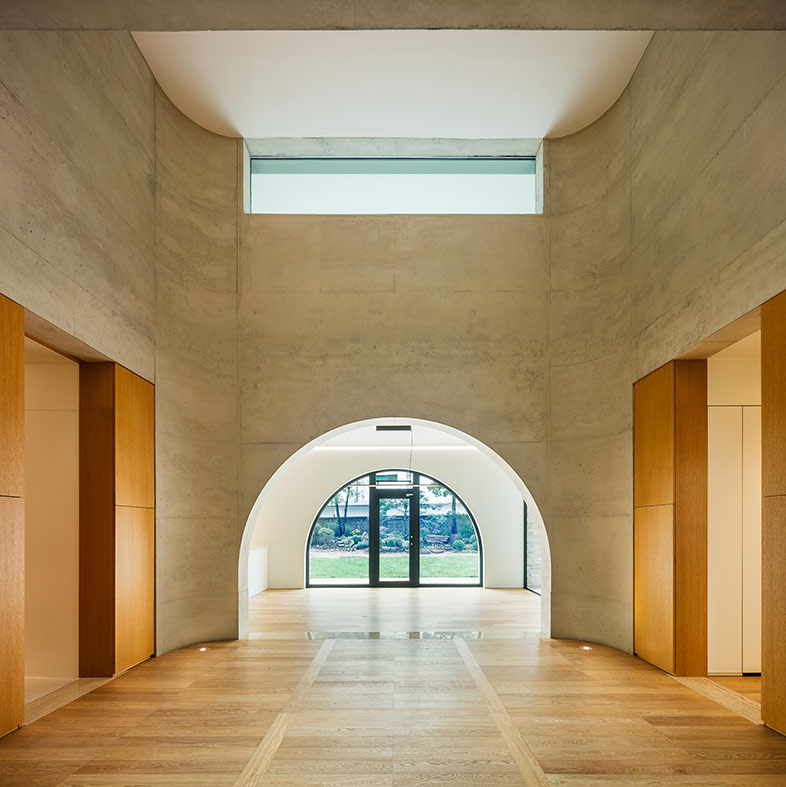 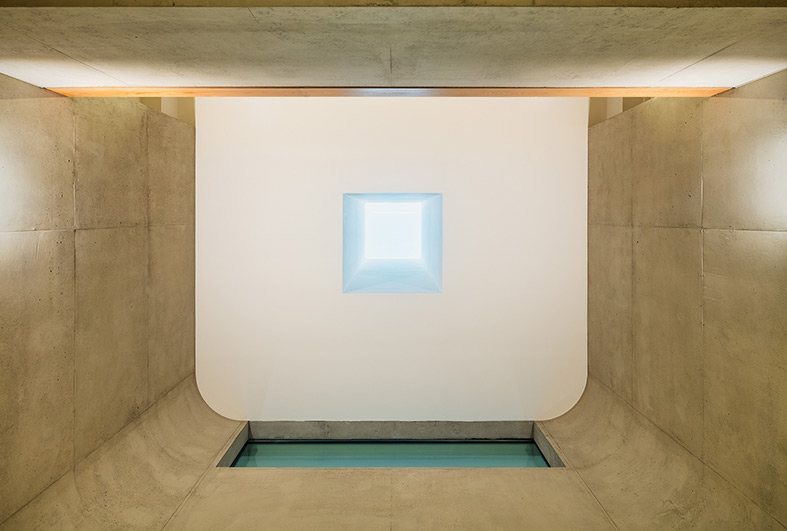 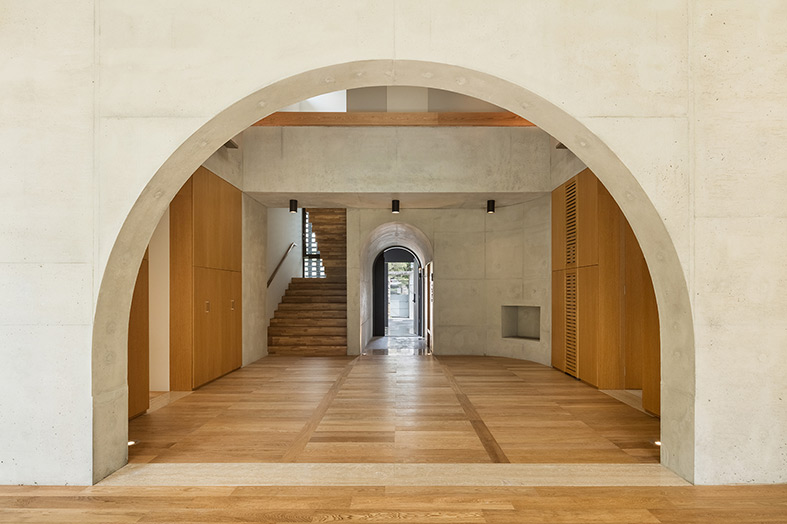 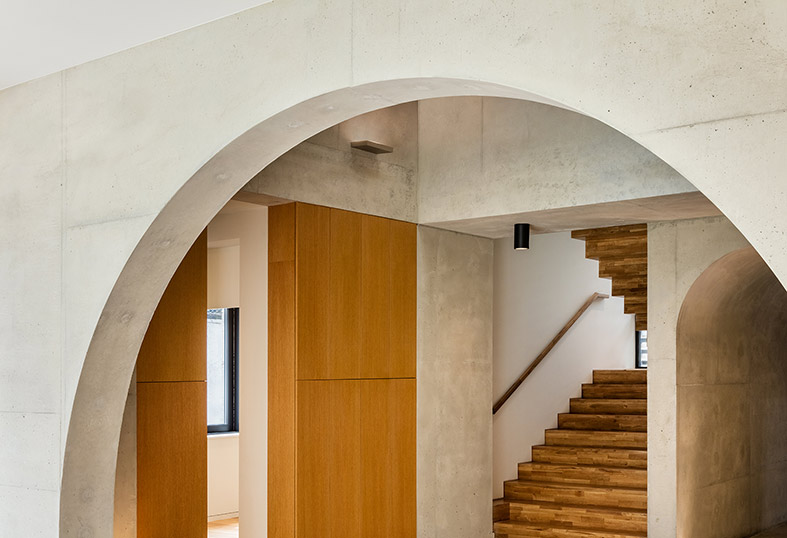 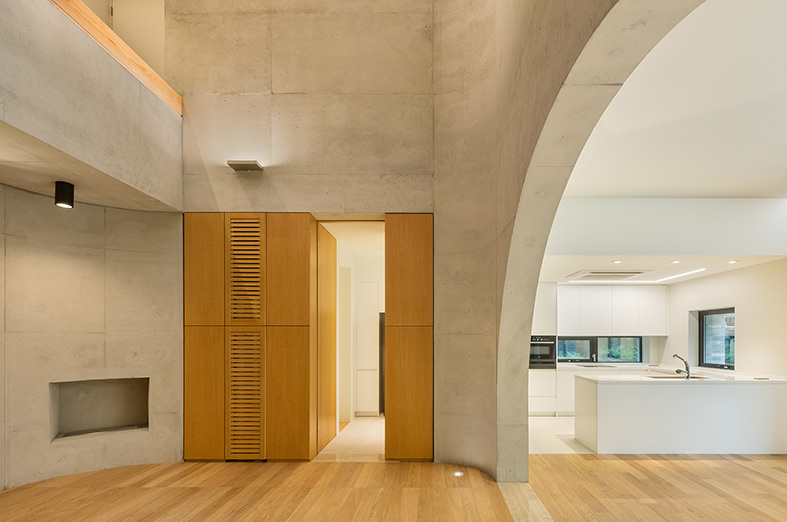 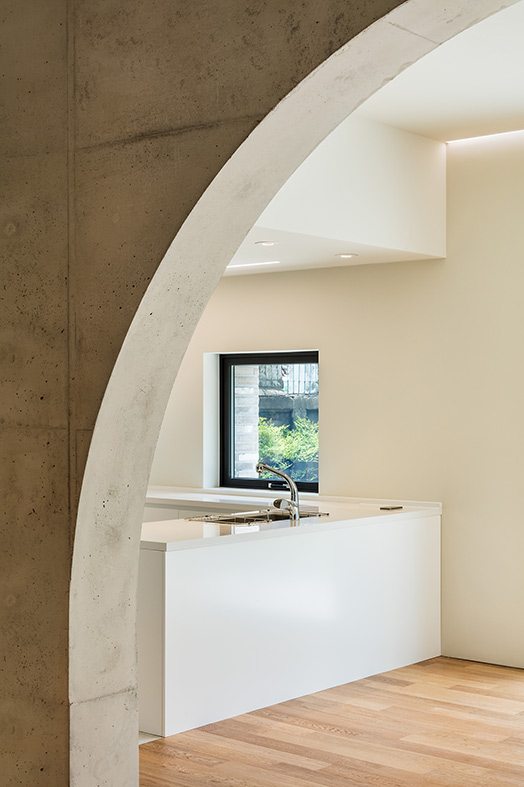 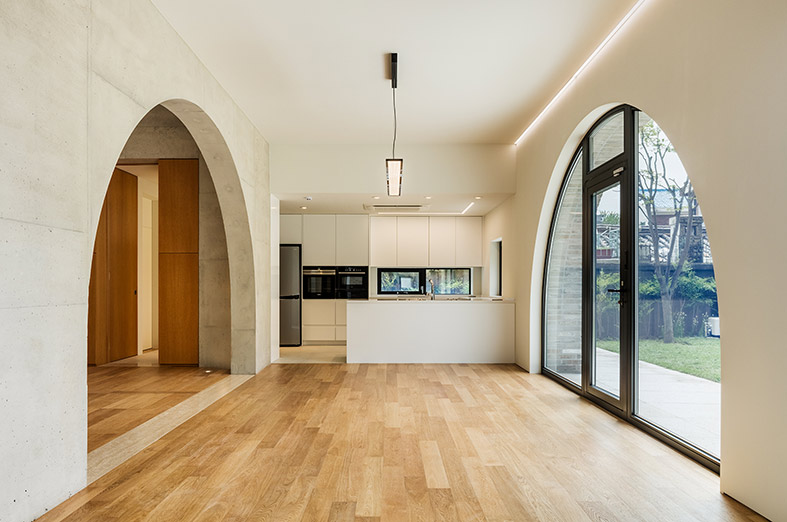 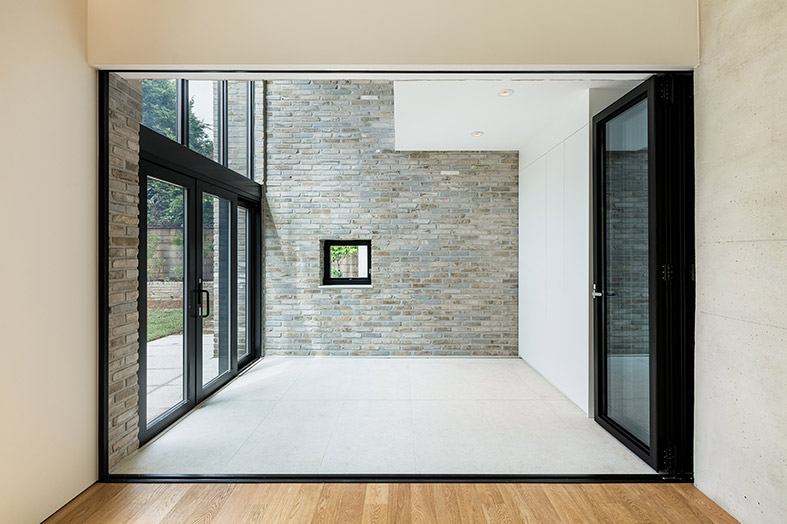 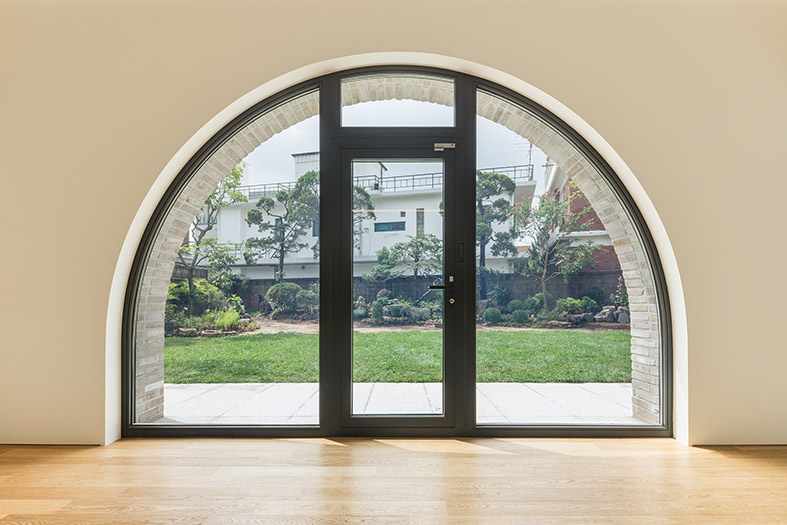 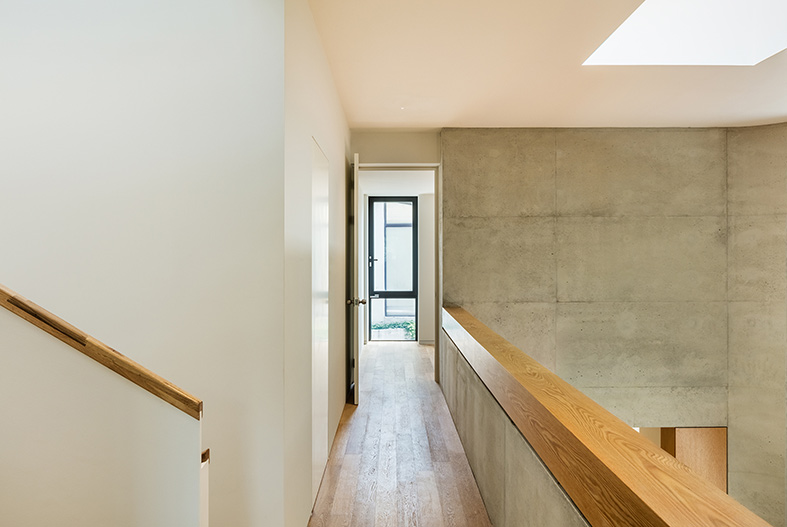 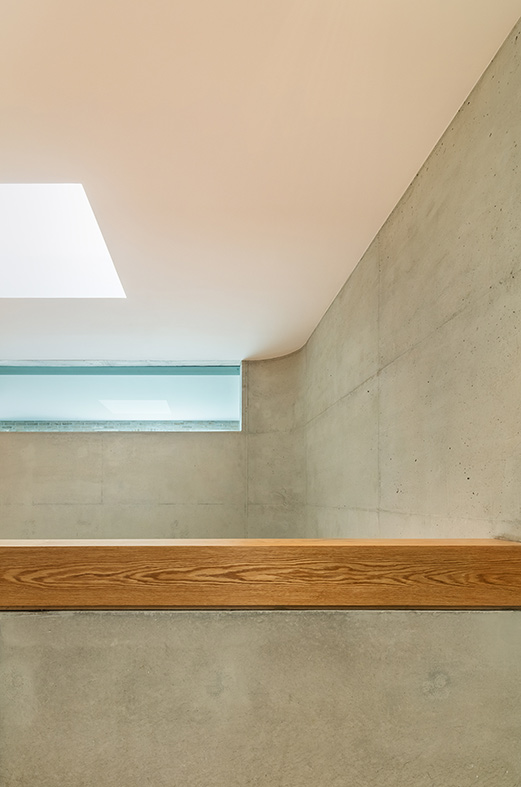 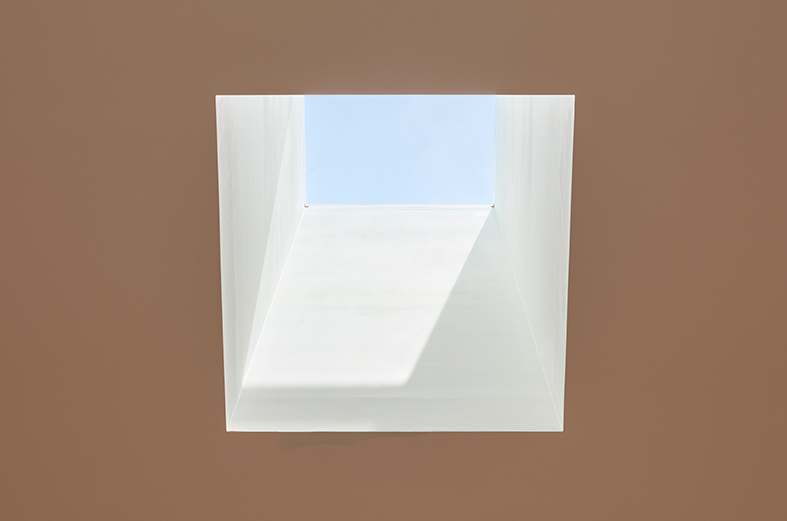 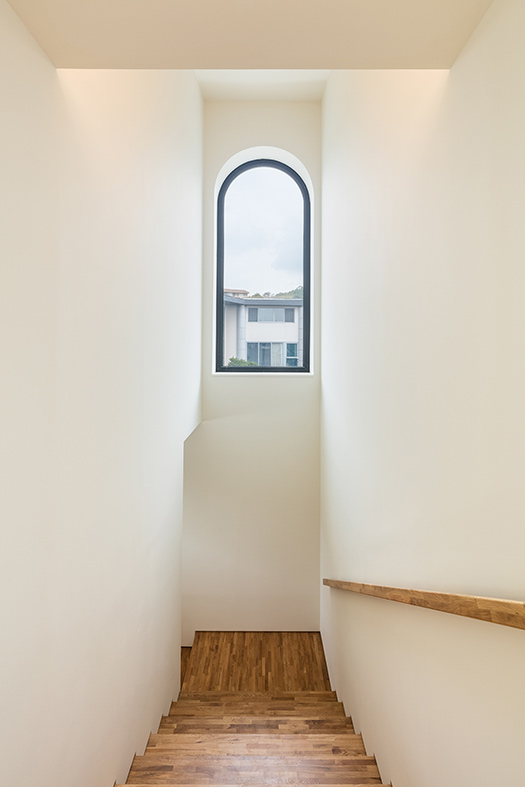 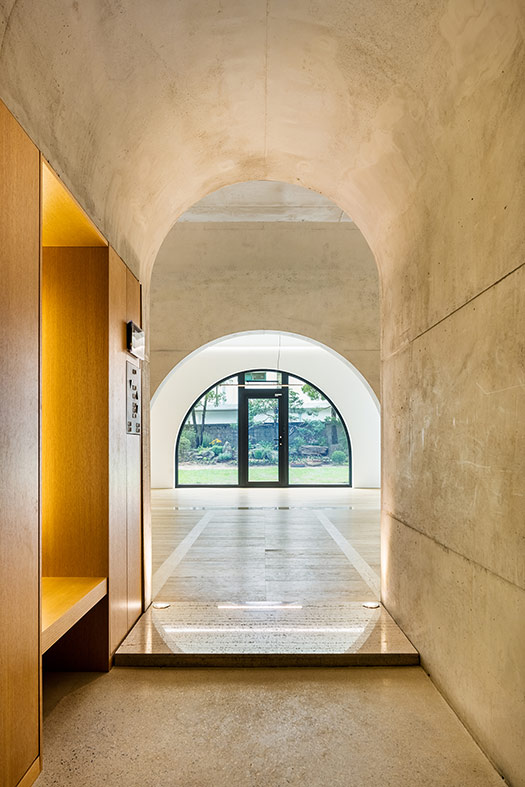 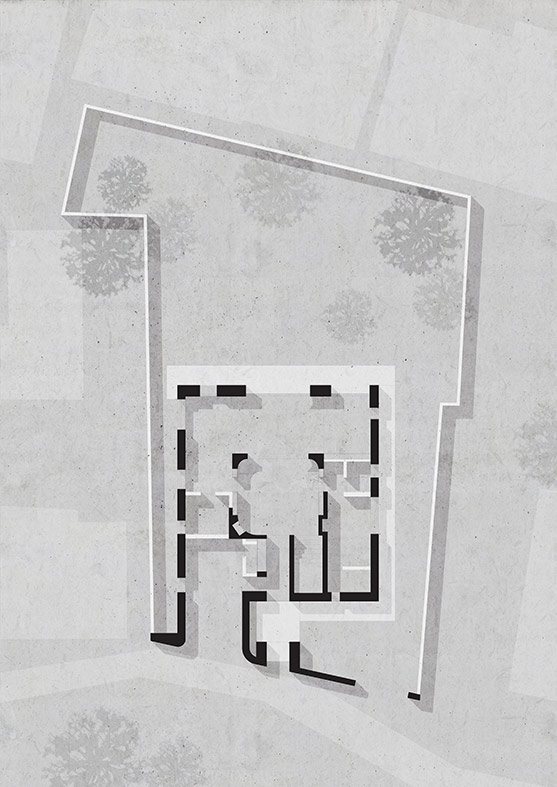 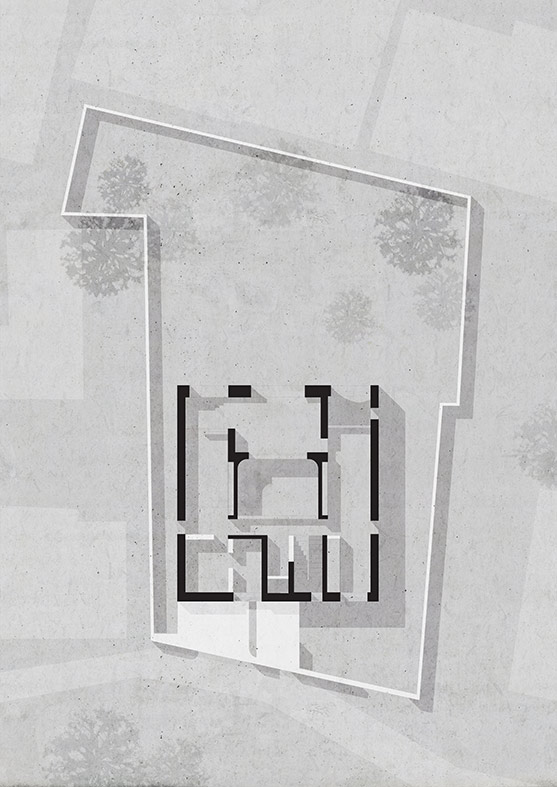 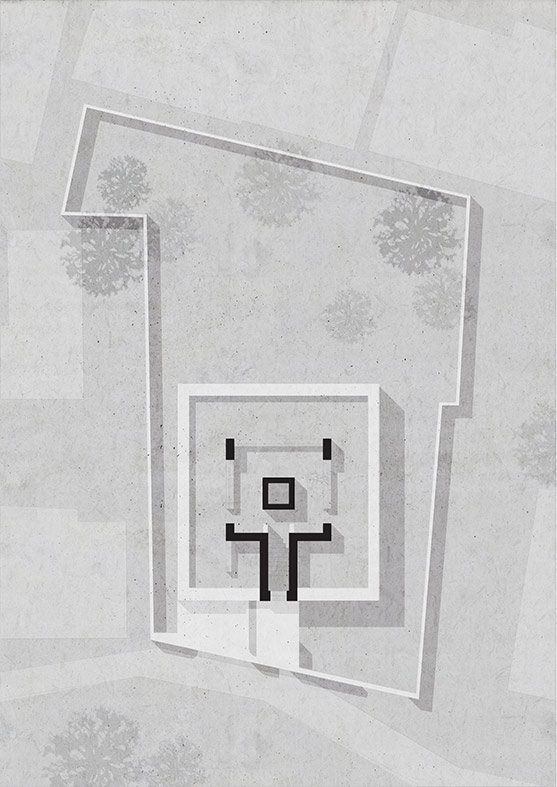 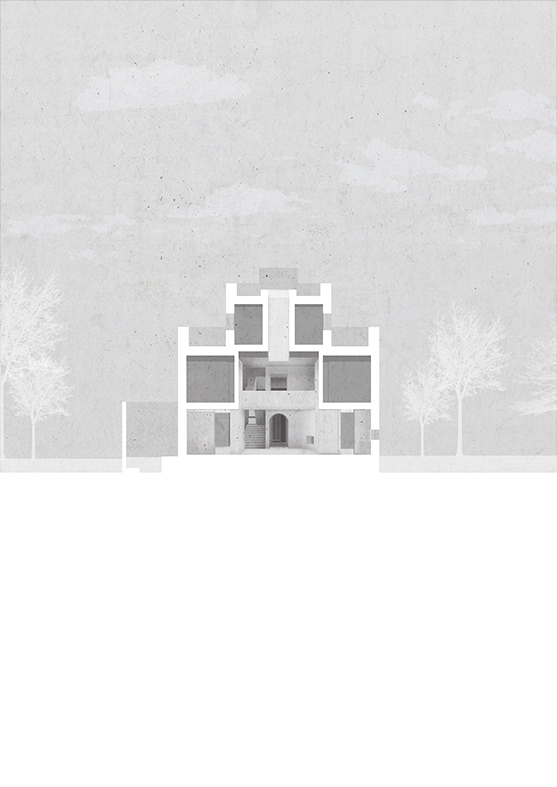 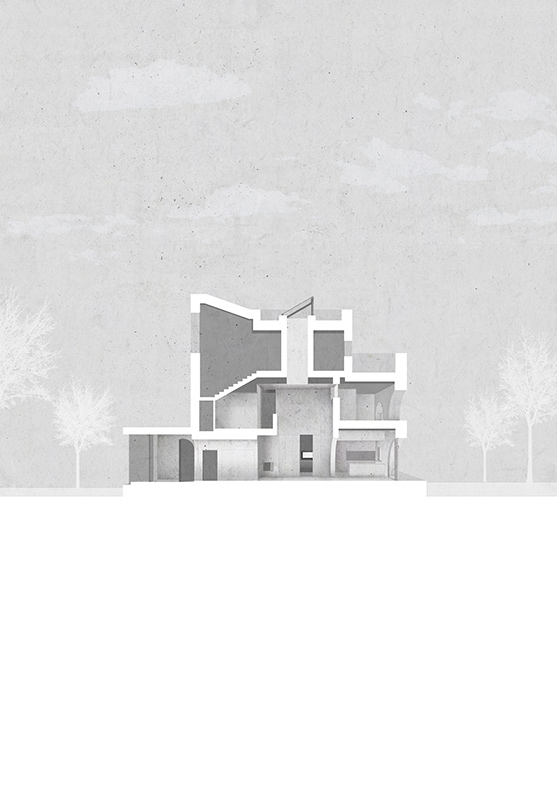 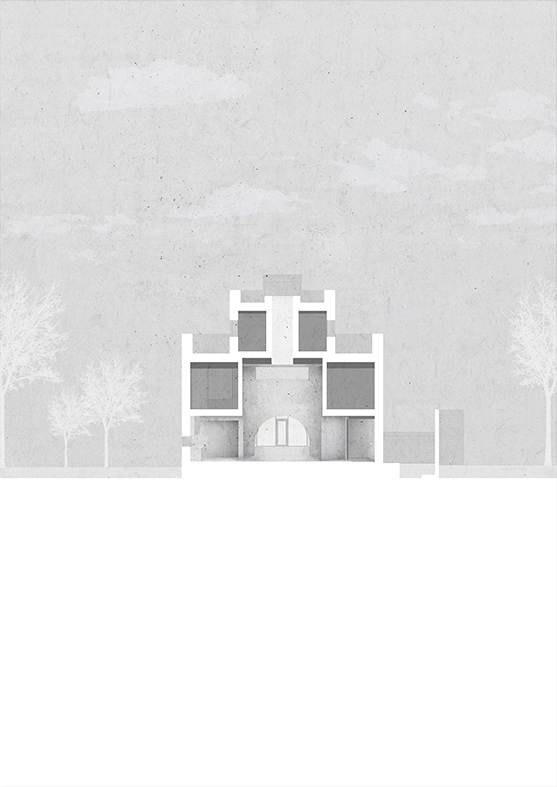 Located in a calm low mountainside overlooking the Bugaksan Mountain, the site reflects both the patina and generic modernity of Gwangwhamun, the historic center in Seoul. The client, a retiring professor, and honorable scholar decided to demolish the deteriorating old house and build a new memorable home for post-retirement years.

It was not an easy decision for the client to demolish the 50-year-old house, built by her own father. The old house accrued character as a peaceful shelter and joyful childhood playground. After years of hesitation, the client decided to tear down the structurally defective house. After three days of demolition, the remains of the wood flooring, window latticework, and door plates were transferred to the client to preserve those embedded memories.

A few plan sketches were provided by the client at the start of the commission. The naïve unprofessional drawings, out of scale with distorted proportions, represented the subtle yet detailed thoughts about a new home filled with the nostalgia of the old house. A house is not a space for an architect’s egoistic expression, but a place for commemorating yesterday, living the present, and dreaming of tomorrow. Thus, the architect’s role seemed to impose an order on the client’s drawings with respect and honor.

The nine-square grid, 3 Kahn x 3 Kahn in East Asia, has been a fundamental typology in architecture, both traditional and modern. The party of the Cheongun Residence was structured as a nine-square grid in its spatial conception with symmetry and centricity. Conceptualized as modest but abstract ideal space, the nine-square grid diagram was developed into a concrete spatial structure with programs and functions. Cheong Residence is planned to function both as a private residence and as a research institute. The parlor at the core of the nine-square grid integrates programmatic functionality with spatial spirituality. The void of the parlor continues through the mezzanine of the second floor to arrive at the light well of the roof, imbuing warm natural light and tranquil air deep into the center of the residence.

The nine-square grid was applied horizontally in plan and vertically in section as regulating geometry. The void space at the core centers an axis that compresses the public realm into the center while disseminating private space to the periphery. The spatial density is maintained in equilibrium by this centralized organization, both centripetal and centrifugal. The parlor between the kitchen area and the guest room on the ground floor maintains the balance between servant and served space. The circulation from the foyer to the rooftop tearoom occurs through the central void space, to generate rhythmic sequences compressing and releasing spatial tensions. The void on the second floor mediates between personal life and scholarly life via the symmetrical order between the master bedroom and library. The light well on the third floor is situated at the concentric center of the tearoom, the centroid of the third-floor plan. This tea room has a concentric square geometry in plan and section that becomes the spatial, iconographic centricity of the house. The compression of the space by the solid light well tube harmonizes with the spatial release through the horizontal windows.

For a scholar dedicated to education and research, the centralized organization of the house represents the essentiality and directionality of life. Concrete, calm, and enduring patina materials were selected for the central structure. Brick becomes the counterpart for the exterior cladding, balancing the tranquility with warm vitality and subtle rhythms. Recycled bricks were used as wall cladding for the exterior walls, conservatory area, and veranda to mediate the transition between exterior and interior.

To deal with the spiritual aspect of materiality, the arch was chosen as the conceptual and structural technique. An arch in the form of a vault guides visitors through the foyer to the parlor. At the central void of the parlor and living room, two consecutive arches add a series of filters to maintain a temperate and calm atmosphere. Arches of the living room, conservatory, and veranda frame the garden landscape and protect the central space from the harsh weather. The Cheong Residence is located in the most historic district of Seoul, which involves the paradoxical coexistence of traditional, colonial, and contemporary architectural scenes. An arch may be the metaphoric interpretation of coexistence, preserving collective memories of the neighborhood’s patinated materiality.

The frontality of the Cheongun Residence arises from the centralized organization, symmetric order, and contextual relationships of the house. The north wall of the house, perceived as a podium, includes the rhythmic and symmetrical placement of a canopied porch and two vehicle entrances. The symmetricity becomes obvious at the receded north elevation, with a central axis between the main entrance and the arch window of the staircase on top. The south elevation facing the main garden has a semi-symmetrical order with a series of arch windows. The frontality and symmetricity of the house is a clear manifestation of the centralized organization and proportioned programs, ultimately resulting in a state of tranquil equilibrium harmonizing the complexities and contradictions inherent in life. 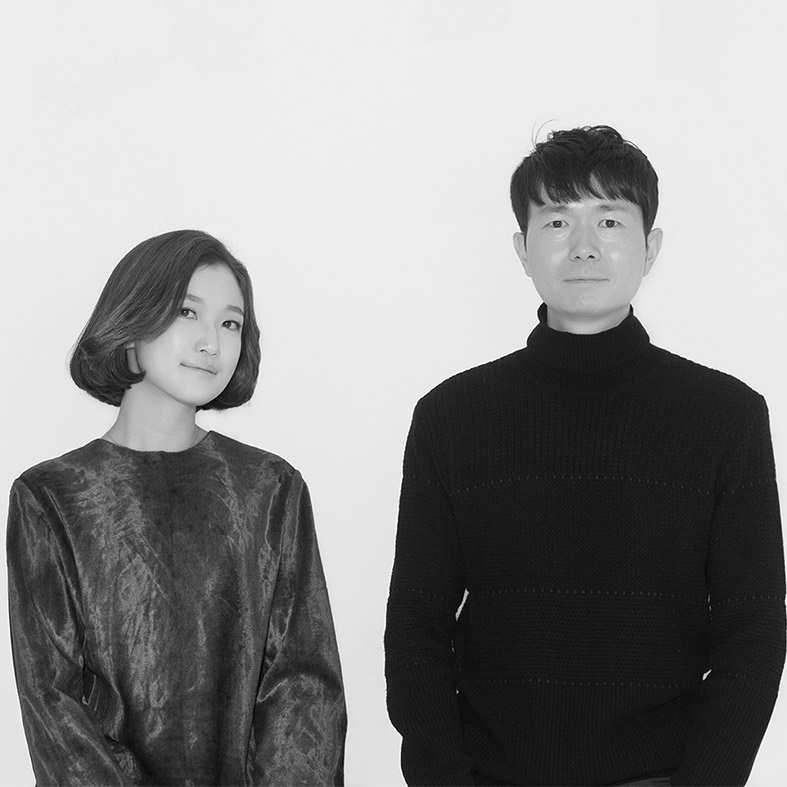