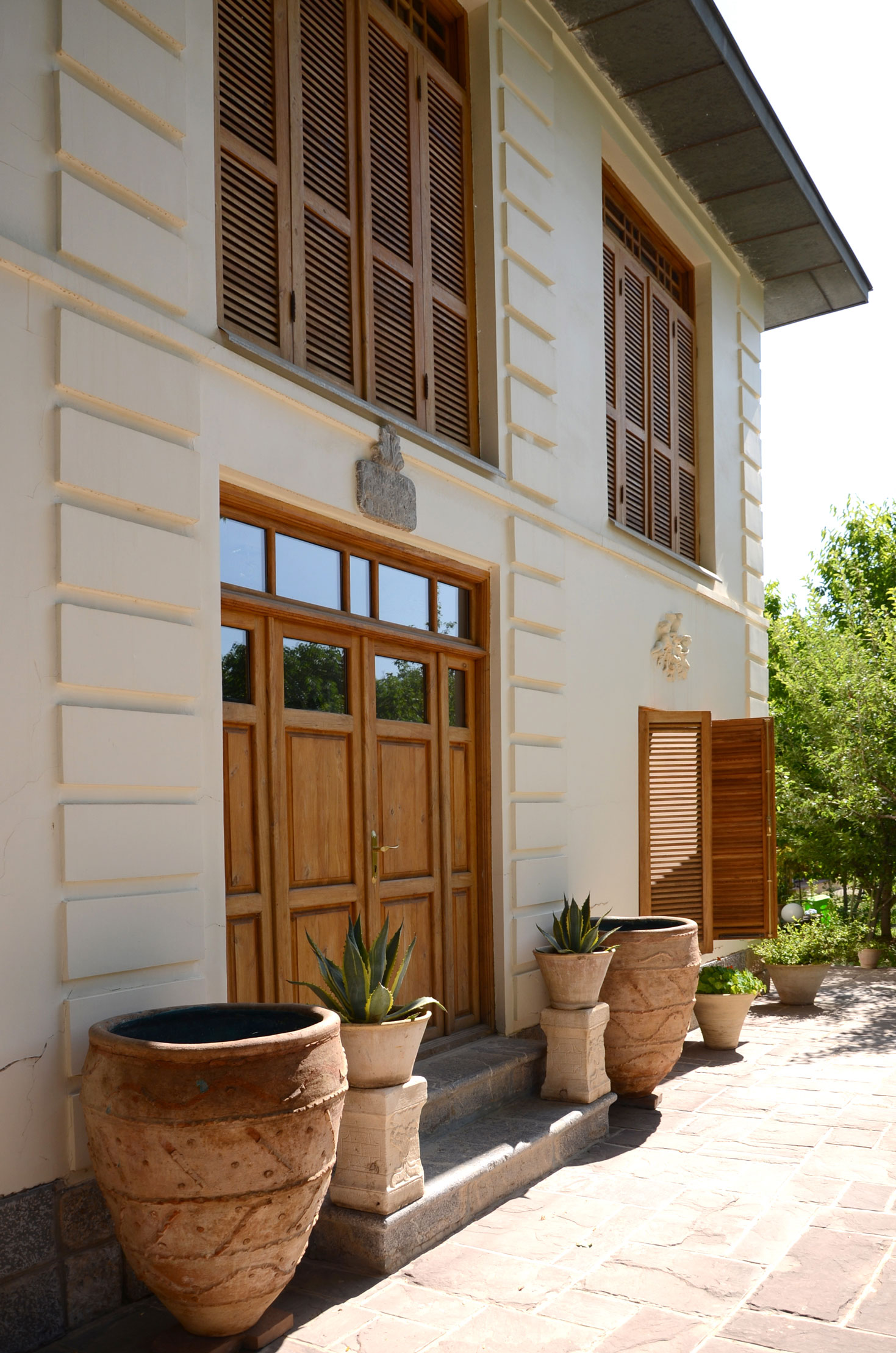 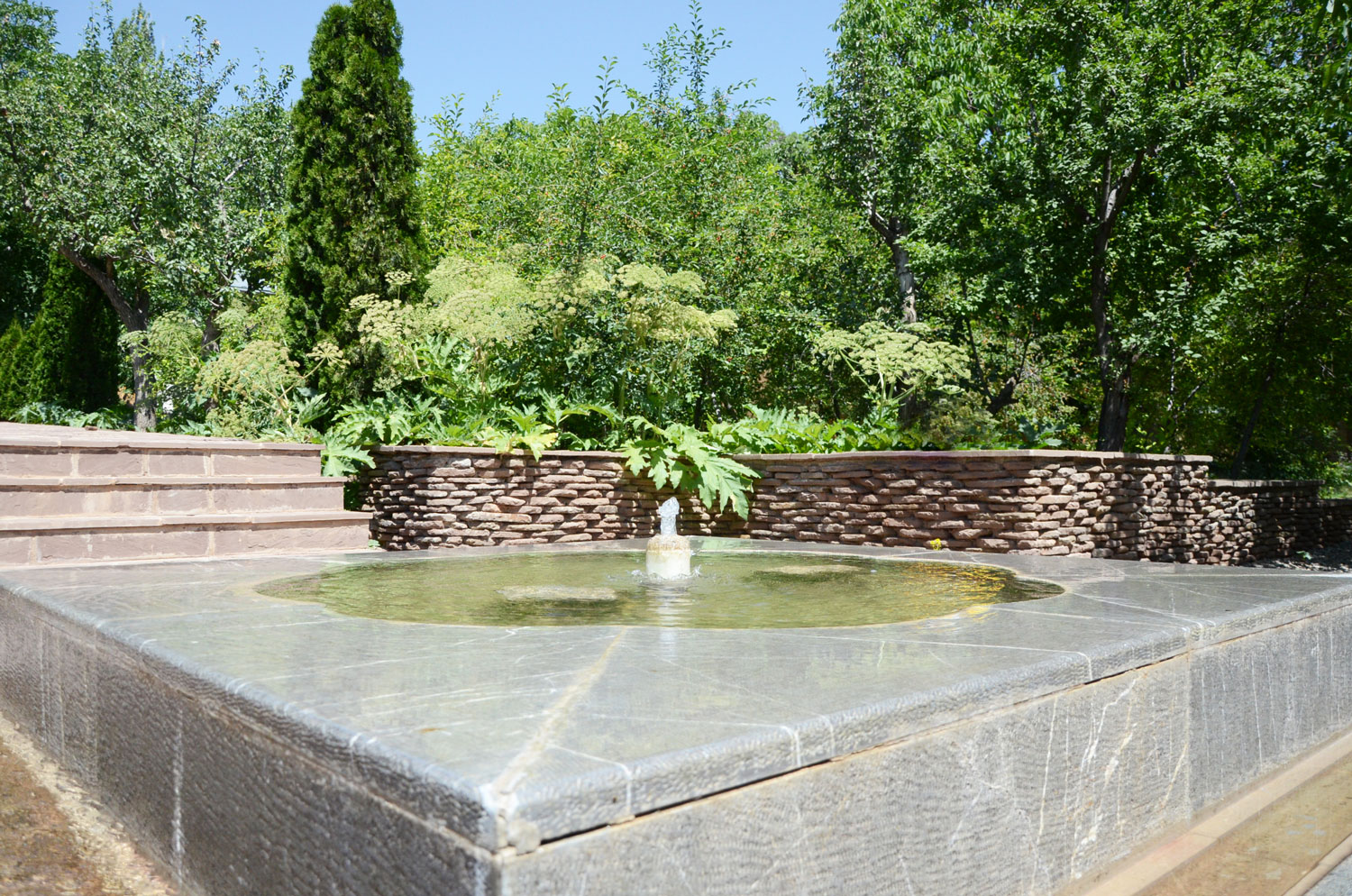 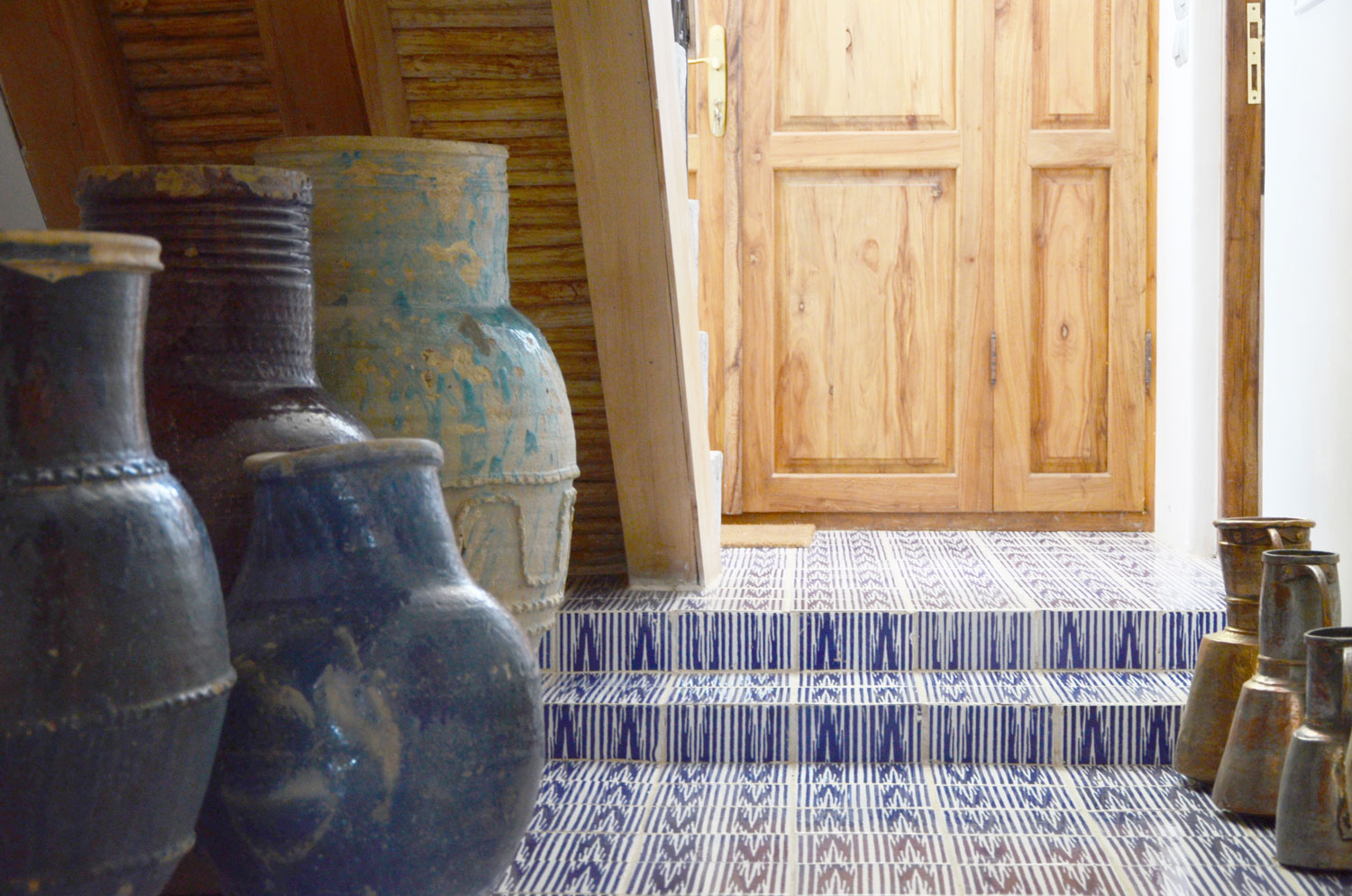 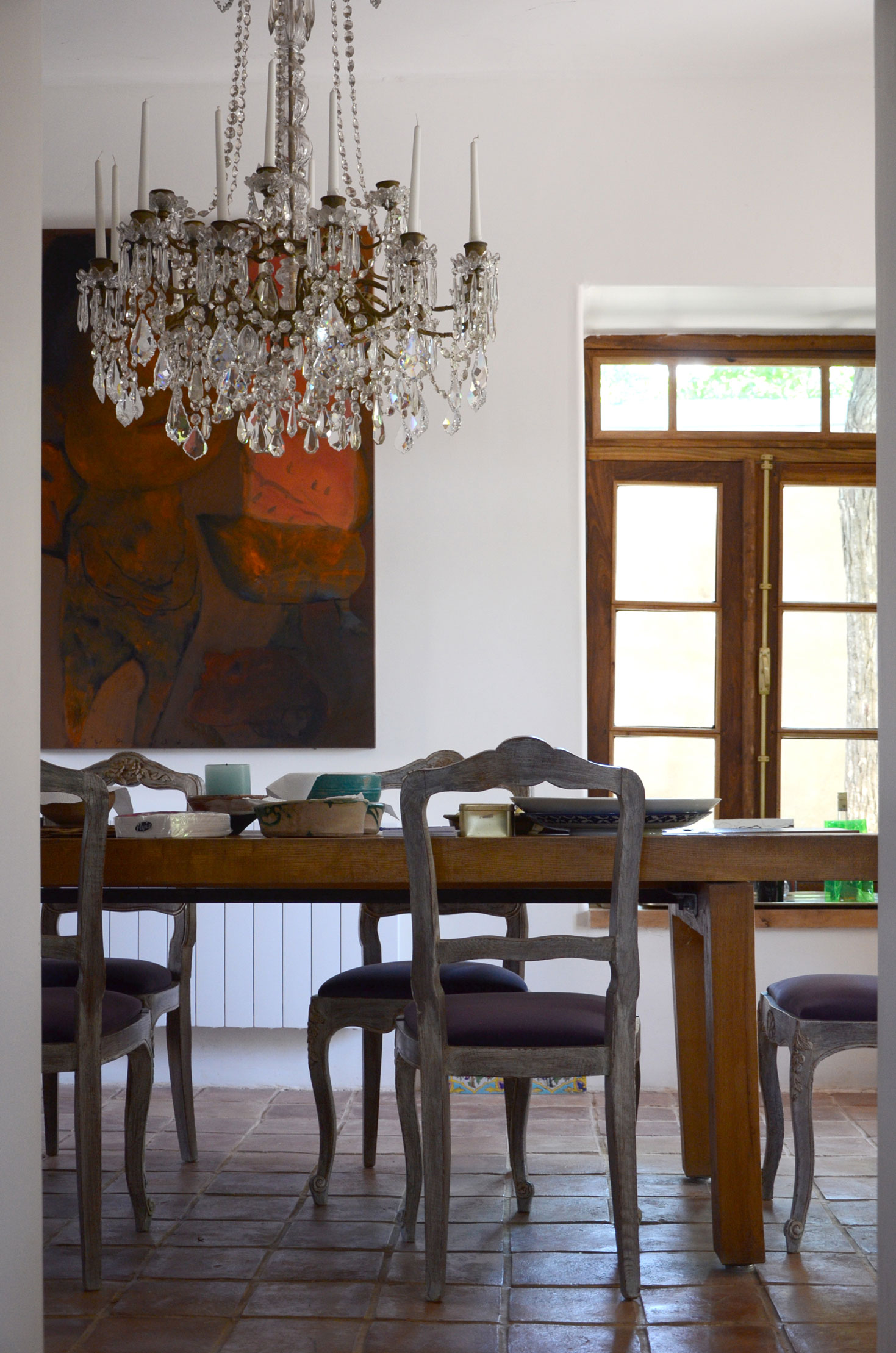 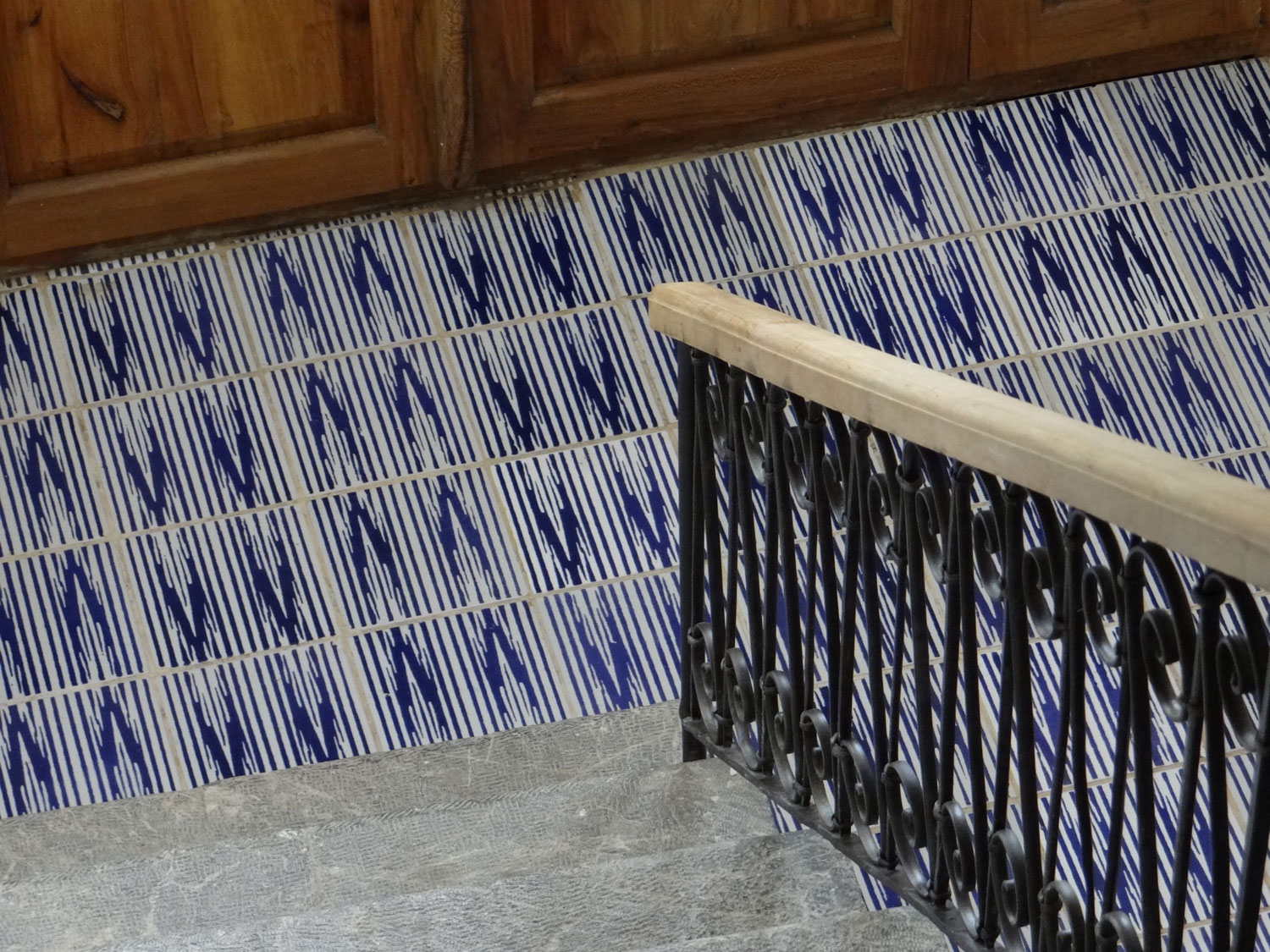 provided by the Architect, Firouz Firouz:

In a small village called Ahmad Abad, to the north of the town of Damavand, a wall surrounds the 8,000 square meter Etemad Garden. Heavily influenced by Persian garden design, with its enclosure, geometry, and spirituality, it offers itself as a place of meditation and joy; a complete delight to the senses. Just 30 kilometers from Tehran, the Etemad Garden is a paradise on Earth, where one feels protected and rewarded.

Gently sloping to the east, the garden stretches across an east-west axis, accommodating a restored guest house, swimming pool, caretaker's house, stable, and greenhouse. Rising two stories and built by the current owner's grandfather, the main house continues to preserve the enchantment of its 1941 inception. The sense of comfort here is further enhanced by the presence of the "Khalvat-khaneh", meditation room.

The stone foundation of the main house itself was preserved, along with many of its original materials and features. The walls are a layering of mudbrick covered in kahgel (cob; a mixture of mud and straw) and finally, coated in plasterwork.  Above, the ceilings are constructed with exposed Poplar tree wooden beams, while the double-pitched roof itself is covered in a final layer of galvanized sheet metal. On either side of the main axis of the home, there are matching iwan and terraces that open to the garden space. These, along with the materials of the walls and the plasterwork on the pillars, were carefully preserved from the original construction design.

Across the garden, in the Etemad Garden, light and shadow are at play, inducing the fascination of discovery in the smell of plants and fruit. The sound of singing birds and gently trickling water lead curiosity toward a pond centered in the garden. Looking deep into the heavens reflected in the water, day and night, one can sit along the water channels enjoying the herbs, nuts, fruits, and berries particular to the Persian garden. In The Garden of Earthly Delights, the five senses are ignited with the witnessing of nurtured creation in all its beauty. Behind its protective walls, peace prevails, enriching our humanness.

Water
Water is a key element of any garden. In the traditional Persian garden, like other natural elements, water is both symbolic and necessary. In the Etemad Garden, streams and pools of water connect via channels to the main garden pond. The garden also has its own source of water from a well and spring nearby. The square-shaped pond at the center of the garden defines the area around it and acts as the “eye of God” for the garden. Here, the symbolic presence of water reflects the heavens in the earth, a tribute to the deep beliefs of Iranians. This garden uses a traditional Iranian irrigation method which brings water to an area for “flooding”, keeping a continuous flow of water at the base of all the trees. These streams of water follow parallel to the main axis path of the garden, beneath the rows of trees lining it.

This garden is centered along a longitudinal axis connecting the eastern and western ends of the garden. This axis maintains the internal unity and cohesion of the entirety of the garden. The Western entrance was changed from public road access to private pedestrian access, thereby making the atmosphere of the garden more intimate and calm. Following this main axis from the western entrance, fruit trees guide your path on either side. A second entrance on the eastern end of the garden is also devoted to riding and pedestrian access. The perpendicular north-south axis provides access to most of the structures on the property, including greenhouses, parking, and caretakers.

The traditional Persian garden is enclosed. The walls protect the interior peace from the bustle of the outside world. In this Damavand garden, the wall is bold and holds a strong presence. You can see the rhythmic texture of brick-work juxtaposed with thatched surfaces, which keep harmony with the surrounding rural landscape in the Etemad Garden.

The structure of the garden stretches east to west across a property with irregular dimensions. Rows of Poplar trees designate the four corners of the garden, emphasizing its overall geometry. One symbolic aspect of the Persian garden is its rectangular shape, subdivided into perfect squares. With regards to the needs of the topography and environment, the Etemad Garden was designed to this symbolic geometry, containing smaller divisions and axial delineations.
The whole design sits on a slope, and the trees are planted accordingly so that the rich views and distant mountains are not obstructed and can be seen from the porch of the home. The unity of the entire garden is reflected in the thoughtful placement of structures and the relationship between the architecture and the garden space. Further, the water supply system ties the whole garden together with its network of streams and pools.

The main path is lined with cypress trees planted between the fruit trees to ensure year-round greenery.
These trees lining the paths are planted to provide interesting variance in the hierarchy of space. They are also used intentionally for the separation of different sections of the property, further emphasizing the intimacy of the garden as a whole.

There is a five point planting plan for the fruit trees, based on the division of the larger rectangular form. Four trees are planted in the corners of the subdivided squares, and one tree at its center. This is both geometrically pleasing, and important for the growth of the roots and the overall health of the trees.

The rest of the planting designs were tailored to the location and geometry of each of the different structures on the property. Unlike the traditional Persian garden, the main house is not on the center axis. There, shorter plants such as shrubs and flowers are placed so that they do not obstruct the views from the porch. On the other hand, in the courtyard near the greenhouse, a potted vegetable garden surrounded by Oleander shrubs helps to reduce visibility between the more public caretaker’s area and the private spaces.

One of the most important aspects of the arrangement and planting of the garden is the consideration of the four seasons. This is a common element of Iranian gardens. The trees and flowers are selected according to the color of the blossoms, the season of blooming, fruiting, autumn coloring, as well as carefully choosing and placing both deciduous and evergreen trees.

Likewise, the garden contains many fruit trees such as apple, walnut, peach, pear, cherry, etc. The different trees and plants were intentionally chosen based aesthetics, shading, aroma, and architectural form, but many also have practical uses such as food and the separation of spaces. 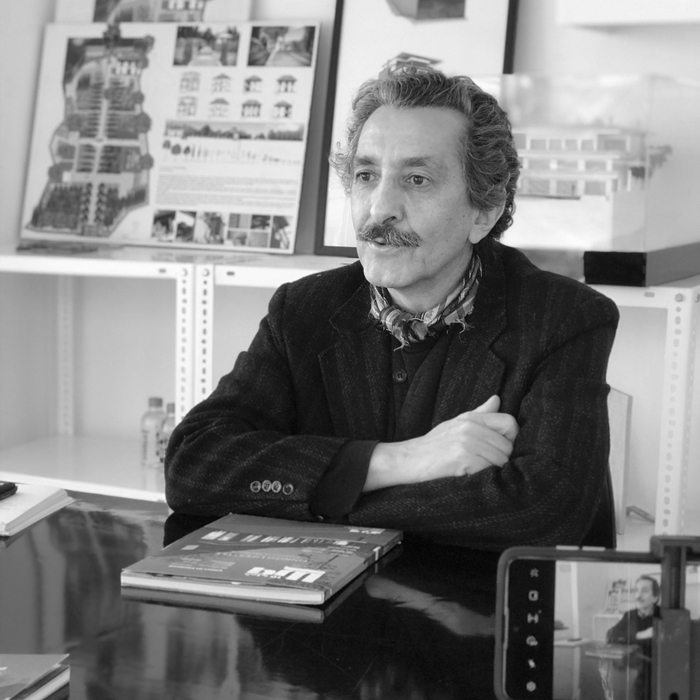