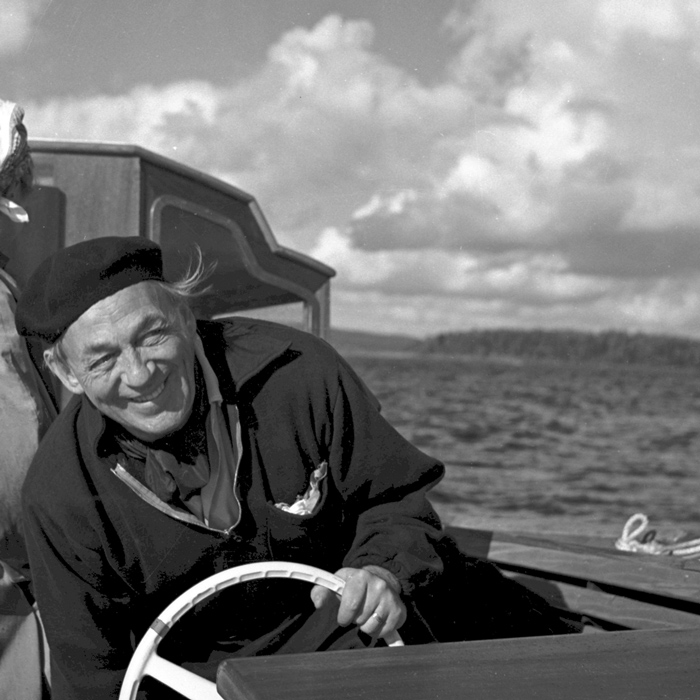 ”I tell you, it is easier to build a grand opera or a city center than to build a personal house."

The architecture of Finland has a history spanning over 800 years, and while up until the modern era the architecture was strongly influenced by currents from Finland’s two respective neighbouring ruling nations, Sweden and Russia, from the early 19th century onwards influences came directly from further afield; first when itinerant foreign architects took up positions in the country and then when the Finnish architect profession became established. Also, Finnish architecture, in turn, has contributed significantly to several styles internationally, such as Jugendstil (or Art Nouveau), Nordic Classicism and Functionalism. In particular, the works of the country’s most noted early modernist architect Eliel Saarinen have had significant worldwide influence. But even more renowned than Saarinen has been modernist architect Alvar Aalto, who is regarded as one of the major figures in the world history of modern architecture. In an article from 1922 titled “Motifs from past ages”, Aalto discussed national and international influences in Finland, and as he saw it;

“Seeing how people in the past were able to be international and unprejudiced and yet remain true to themselves, we may accept impulses from old Italy, from Spain, and from the new America with open eyes. Our Finnish forefathers are still our masters.”

Alvar Aalto is sometimes regarded as among the first and most influential architects of Nordic modernism, a closer examination of the historical facts reveals that Aalto (while a pioneer in Finland) closely followed and had personal contacts with other pioneers in Sweden, in particular, Gunnar Asplund and Sven Markelius. What they and many others of that generation in the Nordic countries had in common was that they started off from a classical education and were first designing classical architecture, though what historians now call Nordic Classicism – a style that had been a reaction to the previously dominant style of National Romanticism – before moving, in the late 1920s, towards Modernism.

Aalto built his first piece of architecture while still a student, a villa for his parents, at Alajärvi.

He busied himself with a number of single-family villas, all designed in the Nordic Classicism style, such as the manor-like villa for his mother’s cousin Terho Manner in Töysa in 1923, a summer villa for the Jyväskylä chief constable in 1923 and the Alatalo farmhouse in Tarvaala in 1924.

As a young architect in 1925, Alvar Aalto wrote, ”The only proper goal of architecture is: build naturally. Don’t overdo it. Don’t do anything without good reason. Everything superfluous turns ugly with time.”

With his own house, Alvar Aalto somehow anticipates the famous Villa Mairea, which is by far more luxurious, and where Aalto’s creativity came into full bloom. His own studio house is of modest size in comparision with his later villas, but also features much of the originality and elegance, much appreciated by his clients. Compared with the Villa Mairea, the Aalto House is of a cozy and intimate character. The design of the Aalto House is strongly concerned with the appropriate orientations of the different rooms in respect to the sunlight, the sloping garden, and the road. In this relation, Alvar Aalto once stated: ‘ We wanted to make the best use in a private house of natural lighting, the orientation of the terraces and the different rooms, shelter from the wind and so on, so because of our climate, we were obliged to adopt a complex solution with a lot of external walls. This required a more thorough investigation of the insulating properties of the external walls...’

In 1952, he designed and built a summer cottage, the so-called Experimental House, for himself and his new wife in Muuratsalo in Central Finland.

The experimental house of Muuratsalo in Säynätsalo was used as the summer home of the Aalto family until 1994. Since then it has been part of the museum buildings. The lot contains the summer house, a shed, and a smoke sauna. Aalto described this group of buildings as a combination of an architect’s studio and an experimental center, in which one could also carry out experiments that are not yet sufficiently well developed to be tried out in practice and where the proximity of nature may offer inspiration for both form and structure. It was a kind of a laboratory, which at the same time was combined with a playful approach.

Later, in 1955, Studio Aalto (Villa Aalto -02)  was completed, also in the Tiilimäki neighborhood of Munkkiniemi. Many times tourists, who came from far-away countries tried to peek at the house from a nearby sports field. The locals knew that Aalto and his wife liked to take “open air baths” naked in the yard when services were held at the nearby church. Especially Japanese tourists tried to climb over the fence and into the garden, and this habit of the resident couple came as a surprise to them. The neighbors could always hear it when this reality dawned upon the tourists. The locals were under the impression that the Aalto’s found all this amusing.

Aalto lived in the villa up to his death in 1976, and after this, his second wife Elissa Aalto lived there until her death in 1994. The villa was protected by law in 1982, and it was renovated inside and out in the early years of the new millennium, funded by the Finnish Ministry of Education and Culture and the city of Helsinki.

Alvar Aalto died on 11 May 1976, in Helsinki, and is buried in the Hietaniemi cemetery in Helsinki. His wife and the office employees continued the works of the office which were still in progress. In 1978 the Museum of Finnish Architecture in Helsinki arranged a major exhibition of Aalto’s works.

Aalto’s international reputation was sealed with his inclusion in the second edition of Sigfried Giedion’s influential book on Modernist architecture, Space, Time and Architecture: The growth of a new tradition (1949), in which Aalto received more attention than any other Modernist architect, including Le Corbusier. In his analysis of Aalto, Giedion gave primacy to qualities that depart from direct functionality, such as mood, atmosphere, the intensity of life and even national characteristics, declaring that “Finland is with Aalto wherever he goes”.