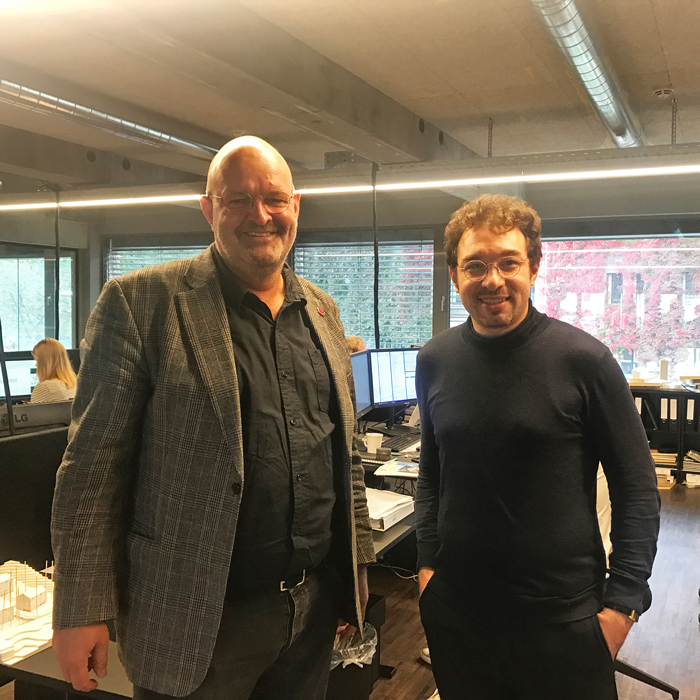 Intimate engagement with nature is signified by a site and design that permit the villa to nestle and to extend out into surroundings, by asymmetrical and open design, colors reflecting the setting, and natural and varied textures. Distancing from the setting, on the other hand, is signified by a compact form, cubic in outline, often with a podium or similar device to elevate the living quarters off the earth, studied proportions, and emphasis on plane surface of white or of a light color, which disguise the nature of the materials (Ackerman, 1990)

I use this quotation from James Ackerman to make this conversation with Jarmund/Vigsnæs; a productive and provocative practice architecture firm in Norway.

The Villa, The Practical Architecture

Amirabbas Aboutalebi:
Villa-culture has thrived since the first cave dweller to Babylon gardens, Roman “vill”s, French “ville”s, British villas, Mediterranean Sea vacation rentals, and to contemporary suburb houses all around the world.
How is villa-life in Norway?

Einar Jarmund:
The tradition of the private houses and villas in suburbs has always been a part of Norwegians life; there has always been a need to connect with Nature. The culture of having a second home in Norway is very common;
Norwegian poetic modernism has established a way of building in nature, with simple geometry forms, natural materials, clear and craftsman-like detailing, natural colors, and only carefully considered interventions on the site. The Villa Schreiner in Oslo by Sverre Fehn is the most important icon within this tradition.
(Lost in Nature – handbook, March 2007 – Karl Otto Ellefsen – President, The Oslo School of Architecture and Design)

Amirabbas Aboutalebi:
A house tends to be simple in structure and to conserve ancient forms that do not require the invention of a designer; while the villa is typically the product of an architect’s imagination and asserts its modernity.
Regarding the definition, what is the role of your private scale projects, towards your practices?

Einar Jarmund:
We have to admit that our office started with doing villa projects.
Private commissions have been an important part of our projects.
Villa-typology has always been a good opportunity for us to grow and there has always been a market for private commissions for us.
They play a key role in our practices which emphases on the tectonic facts of design and construction and the stress on site-specific responses are the constituent elements of the more contemporary mode of performance-based design.

Amirabbas Aboutalebi:
Most great architects of the past hundred years have begun or catalyzed their careers with an iconic Villa.
What was your first project?

Einar Jarmund:
Yes. It is true. “Villa Berge” was the first project we did. We were amazed that someone had trusted us and we could put our theory into practice and show something.

Amirabbas Aboutalebi:
Why did you name it a “Villa”?

Einar Jarmund:
Oh…. The reason for naming the project was not that conscious.

Amirabbas Aboutalebi:
A Villa, is quasi a lodge, for the sake of a garden, to retire, enjoy and sleep, without the pretense of entertainment of many persons; and yet in this age, the humor takes after that, and no the other.
Villa-purpose in general is about the owner’s health.
Regarding this issue, how do you consider the client’s health in a private project? Is your approach towards “User-Centered Architecture”?

Einar Jarmund:
Not exactly. Architecture has to be healthy in a wide way. Nowadays we do many multiple housing projects and we do not know the clients; housing for sale!
We try to invest architecture into more general terms, into a framework for quality of life.
We are very selective now to our private clients. For us, it is harder to work with private clients. We rather emphasize the tectonic facts of design and construction.
Our attitude is towards higher qualities; inventing new building technologies in order to control the high-cost level in Norway and health for all.

Einar Jarmund:
Yes. We practice in an open context in an increasing field of related professions. Architecture needs more relationship; however, architecture has to be a greater challenge than just making dreams and imaginations physical.

Amirabbas Aboutalebi:
There is an absence of “Architectural Purism” in your works.

Einar Jarmund:
Valergio Olgiati claims that only purely typology of architecture can reach the highest level, but we totally disagree with him; any project needs to relate to its surroundings that grows out of its local conditions to gain reflective content.
In particular, we see Villas as an opportunity to enhance a particular circumstance in the continual search and upgrade of the notion of the “good life”

Amirabbas Aboutalebi:
Common among ancient writings, the villa enjoys from the natural setting restorative powers, or otium, in opposition to the excesses of city life, or negotium.
Horace (65-8 B.C.)
Is it true that most of your projects have so far been freestanding objects in a natural setting?

Einar Jarmund:
Yes, but they are nonetheless very different. NAppskaret is a marriage of Baroque staircase to a technical steel system. The Donning youth center plays with traditional buildings typologies. The villa by the ocean is a relatively plain box, set safety within the bounds of Norwegian poetic modernism. Another villa stands out for its use of red color. And etc…
Through all these projects we are working in contrast to the natural conditions, but always with a thorough understanding of local conditions and care for the natural environment.
True North – Peter MacKeith – Dean and Professor of Architecture. Fay Jones of Architecture, University of Arkansas.

Amirabbas Aboutalebi:
Human have always been collecting natural elements of nature such as water, plants, trees, shelter, by his primitive essence and needs.
To fulfill the villa’s ideological mission, it must interact in some way with the natural context with two types of interaction: 1- a foil to the natural environment in polar opposition 2- a collaboration with the landscape; integrating and embracing the natural colors and textures. [11] Ackerman James S., The villa: form and ideology of country houses (Princeton 1990) p.22
Regarding this quote, what kind of interactions have you made with natural context?

Einar Jarmund:
We have made both types of interaction with nature in our practices; “RED Villa” and “Villa by the Ocean”.
Both projects express the attraction to nature, in two different ways, whether stated in engagement or in cool distance.

Amirabbas Aboutalebi:
Speaking in general terms of villas, do you call “Rust House” a villa project?

Einar Jarmund:
I guess this is not a typical Norwegian villa project.
It is so confined; the architectural volume of the house corresponds to neighboring walls in various heights.  Three volumes create an L-shaped structure with a small inner garden for family enjoyment, in addition to two private and quiet rooftop terraces to the churchyard view.
I call it a courtyard project.
Look at the scale model here.
There is a spatial relationship between each level like a continuous spiral and a relationship with the surroundings.

Amirabbas Aboutalebi:
The writes cottage; an experimental project that would allow the clients to isolate themselves to focus on their writing and work, is this a Norwegian cabin?

Einar Jarmund:
It is not a cabin. It is more a mold structure in the backyard: according to zoning in Norway, you are allowed to build 15 sq.m in existing gardens in a suburban residential area.

Amirabbas Aboutalebi:
Is there any inventions or attitude towards that idea?

Einar Jarmund:
Yes. We have been working to increase the idea of prefabricated buildings. We have invented a kind of cabin with a highly mechanized production system. It is a rapidly constructive and cost effective idea that gives you double-checked high standards living spaces.
It is amazingly important to produce an architecture of appropriate function, rather than low-quality buildings with high imaginations.

Amirabbas Aboutalebi:
How did you get the iconic “Dune Villa” project?  The villa sits as a sign in its context.

Einar Jarmund:
There is an organization called “Living Architecture” founded by Alain de Botton, a Swiss/British philosopher and writer. The company rents holiday homes designed by renowned architectural practices like MVRDV, NORD, David Kohn Architects, Peter Zumthor.
We were invited to take part in this program and “Dune House” is the result of this participation.
The program was to make a kind of architectural conversation, which sounds interesting to Villa magazine.

Amirabbas Aboutalebi:
Is there any lessons from traditional/vernacular architecture of Norway that you would like to mention here?

Einar Jarmund:
Yes. We use some methods from log-constructions from 300 years ago in Norway.

The tree, the man, and the ax!

Like In our Louisiana Log Pavilion to make a sense of place; the pavilion presents a sense of solid materiality where the visitor is given a concentrated experience of pushing through passages.

Amirabbas Aboutalebi:
The unbuilt villa projects can be regarded as experimental houses that provide the opportunity to study a technical or functional aspect in concrete terms or to develop new ideas. Have you ever been involved in such a project?

Einar Jarmund:
Yes. Here is an ideal courtyard Villa that we proposed in a Danish architectural competition. We did it at the same time as the Oslo School of architecture.
The idea was to create an architecture for a whole life cycle.  We shared some practices of spatial organizations. It was later turned into a prefabricated concept for a Swedish company. It has never been published and we love to publish the “Unbuilt villa” in your magazine.