Interpretation Center of the Romanesque 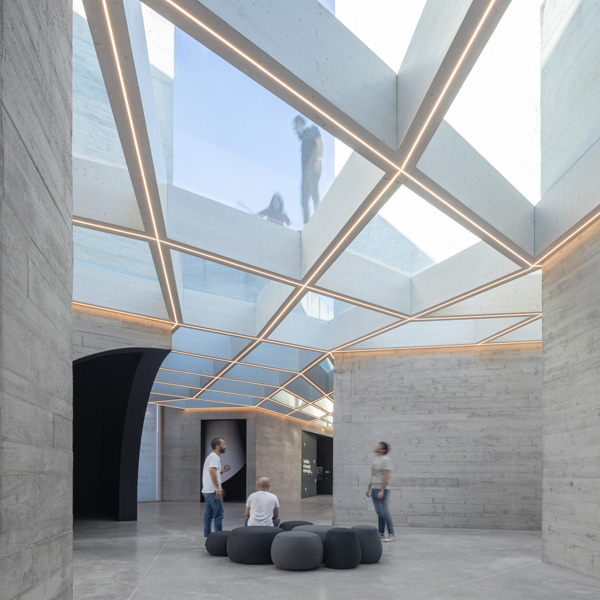 Centro de Interpretação do Românico is an interpretation for Romanesque architecture in concrete that Spaceworkers Portuguese architecture studio has designed to create a relationship between the present and the distant Romanesque past.

Interpretation Center of the Romanesque by Spaceworkers

Located in the district of Porto, in the Village of Lousada, the Interpretation Centre of Romanesque is located in an area that is an expansion of this village marked by a strong relationship with an urban square called Praça das Pocinhas and with the Senhor dos Aﬂitos Church - a strong reference in the town center.

The building seeks to create a relation with the site by its implantation on the village square limit establishing an urban continuity between its volumetrics and the surroundings and making it a new element of reference for this village center.

Based on the generator concepts of Romanesque architecture in Portugal, the building aims to be a transitional element between the present and the distant Romanesque past. In an austere way, the volumetry proposed contains the principles of unity within diversity, appearing under the form of several volumes with different heights and dimensions, demonstrating the diversity that Romanesque buildings have left us.

Each volume is a distinct exhibition space. To explore the relationship between them, it was created an idea of the rural street as a unifying element and generator of life experiences - a cloister - a central body covered by glass that precedes the entry in each volume. This central space allows the light invasion into space and explores the constant bright/dark relationship between it and the exhibition spaces.

Internally the exhibition spaces reﬂect a bit of monumentality, referring us to the interior of the Romanesque buildings, not only for its scale but also by their shapes. Therefore, each of the volumes ceilings reinterprets one of the roof types used in Romanesque architecture.

As to materiality, it was eligible the nowadays stone to build the building - the concrete in its apparent and austere natural state. Therefore, building always tries to be contemporary but without forgetting the important past, by creating an atmospheric symbiosis between these different times.