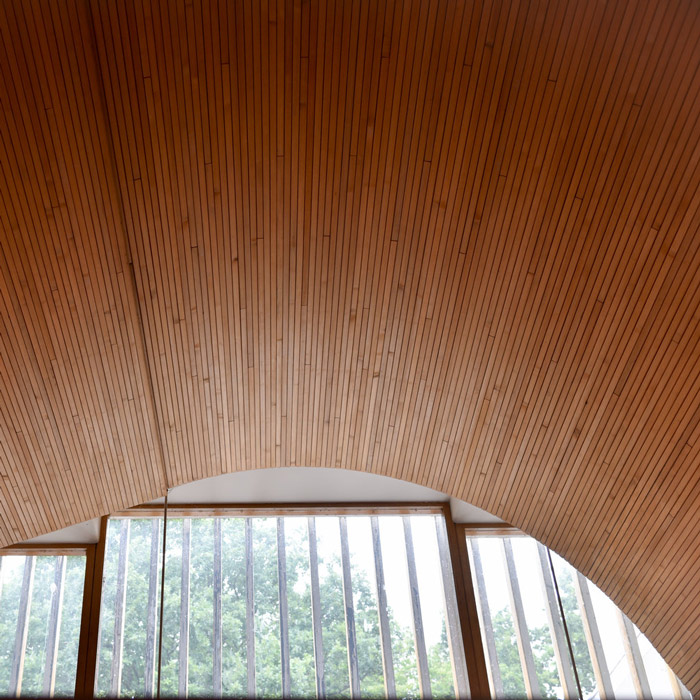 “Aalto objects have been used to decorate many spaces. In Finland, we have grown up surrounded by Aalto design. Aalto is everywhere,”
Professor Lars Pettersson

Alvar Aalto – Art and The Modern Form presents not only the man as an architect; but a designer, artist, philosopher, and cultural figure.

Alvar Aalto was a socially skilled cosmopolitan who had a profound cultural impact. He was sovereign in various fields, and his works imply the influence of various arts.

Aalto’s design works are based on the 19th century Gesamtkunstwerk thinking. He created not only the building but also its surroundings, interiors, furniture, and lighting fixtures to form a harmonious experience.

Originally designed to match architectural projects, Aalto furniture and lighting fixtures have since then found their way to many private homes and public spaces.

The Father of Modern Wood Ceilings

“In every case, one must achieve a simultaneous solution of opposites.  Nearly every design task involves thousands of different contradictory elements, which are forced into functional harmony only by man’s will.  This  harmony  cannot  be achieved by any other means than those of art.”;

Wood was a solution to Aalto’s quest for functional harmony. In his wood ceiling design, he married the warmth of organic material with rational, rectilinear grilles,  often set within a curved ceiling plan. Since the mid-1960s, wood ceilings have become more mainstream in postmodern and contemporary architecture, but it is in Aalto that we find the genesis of this distinctive style.

During the 1930s Alvar spent some time experimenting with laminated wood, making sculptures, and abstract reliefs, characterized by irregular curved forms. Utilizing this knowledge he was able to solve technical problems concerning the flexibility of wood and also of working out spatial issues in his designs

Aalto’s early experiments with wood and his move away from purist modernism would be tested in a built form with the commission to design Villa Mairea (1939) in Noormarkku, the luxury home of the young industrialist couple Harry and Maire Gullichsen. It was Maire Gullichsen who acted as the main client, and she worked closely not only with Alvar but also Aino Aalto on the design, inspiring them to be more daring in their work.

The bases of Aalto’s planning are “nature and biology”; they are also the title of the introduction by Marcello Fagiolo to the essay“Idee di Architettura - Scritti scelti 1921-1968” published by Zanichelli and dedicated to him.

Marcello Fagiolo declares that “the Aalto’s naturalism is a pattern of biological formation and growing”. This reference to nature can be easily found in the standardized planning too.

According to him, in fact, standardization must be natural; in other words, it has to be considered as a “system based on infinitesimal elements, that allows a continuous variability of shapes which grow organically”. Standardization in architecture must scour the same course of the biological pattern which affects the “life of shapes”.

The materials used in Maison Louis Carré were purposefully chosen. Pinewood from Finland is used on the interior, while vertical wooden louvers are occasionally revealed on the exterior as well and most prominently at the main entrance.

“In principle, national romanticism keeps alive in the many aspects of Aalto’s production. The basics of the complete art-work principle can be found in all of his design as well as in every important detail, including door handles.”