"a House for an Architect" Workshop 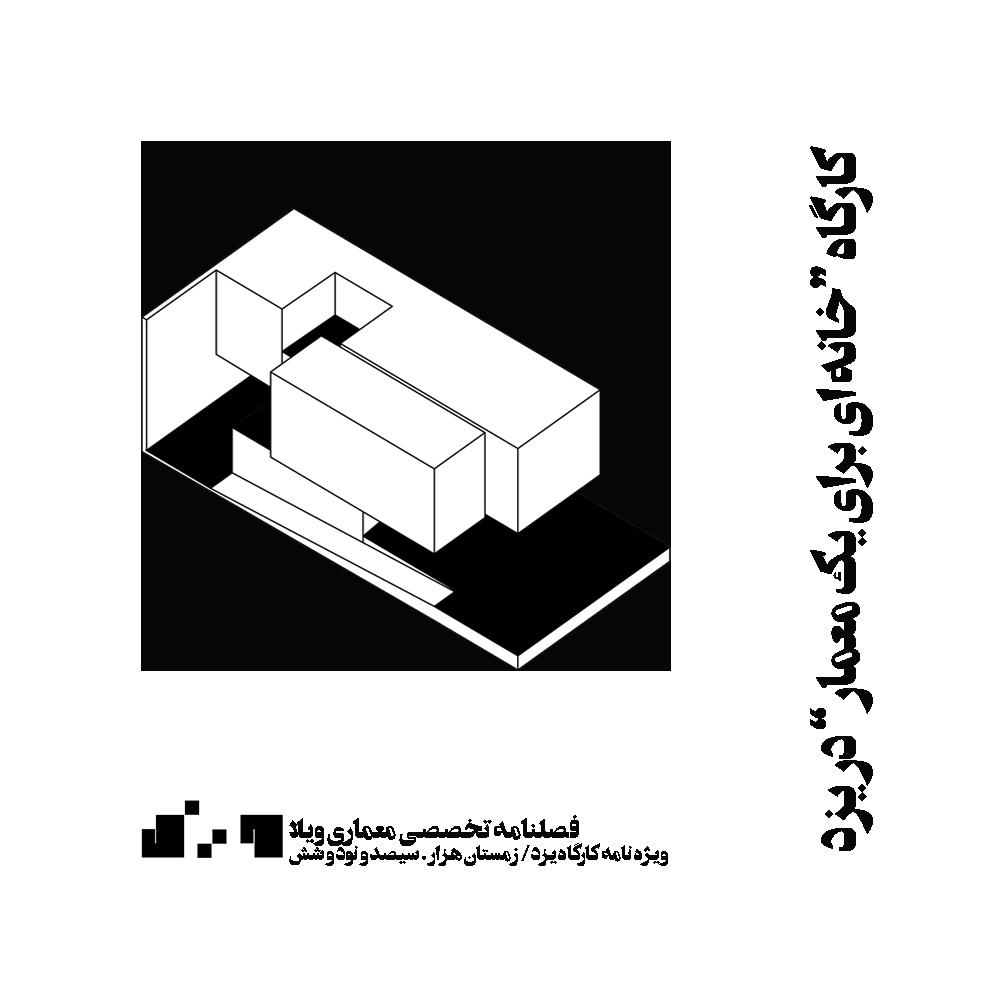 The Architecture Studio of Amirabbas Aboutalebi who has accepted the offer to Design a House for a former colleague presented the idea of running a competitive workshop. The site was located in Yazd within a ten-minute ride from the historical context of the city. The client was obligated to opt the winning project of the workshop in order to execute, construct and pay for all publication costs of the workflow in Villa magazine in return for the 100% discount on the design contract fee.

From the set of contemporary Iranian architecture strategies, health standards, energy saving, and each panelist’s personal perspective devised ten major criteria by which the projects would be evaluated:

The architectural design process by each participant will be reviewed by famous and well-known architects; Rana Saghazadeh, Shahin Heidar and Hooman Balazadeh during design development on how successful the work have been in meeting the consideration & criteria of the workshop. Supported by the Iranian Architect and contemporary architecture of Iran’s medias, call for registration was announced for all interested recipients in July of 2017. amongst the top volunteer’s CVs, 10 groups from the cities of Tehran, Tabriz, Isfahan, Mashhad, Zanjan and Yazd were selected to attend the workshop. The recipients were from different backgrounds from freshmen architecture students to employed and unemployed graduates and professional consultants whose participation fees were sponsored by the YOUB Group.

The introduction session was held in the headquarter of Villa Magazine with attendance of the strategy consultant of the workshop, Engineer Haeri Mazanarani, chief editor of Andishe Iranshahr magazine, on September 21, 2017 when the main intellectual approaches of the workshop and the client’s requirements were mentioned. After two months of very serious work and effort, the groups of participants in the workshop provided final documents featuring architectural designs and final models at a scale of 1:100 on November 2017 ,29, for submission to the works exhibited by the Secretariat of the workshop.

Review and evaluation sessions of the produced works after question and answer on the works in the exhibition hall with the presence of the head of the groups, members of the design team, the owners of the work (husband and wife), Mr. Mohammad Reza Haeri Mazandarani, Amir Abbas Aboutalebi, Hooman Balazadeh, Shahin Heydari, Ali Akbar Nasrabadi and Fatemeh Tajik were held at the main conference hall of the Communication Museum. The exhibition was held from 5 to 13 December of 2017 at the site of the National Museum of Communication of the Islamic Republic of Iran located at the headquarters of the National Garden of Iran with the full support of the museum and the chairman of the time, Mr. Ali Akbar Nasr-Abadi and exposed to visiting architectural students and other interested parties. Sustainable architecture media provided a visual presentation of the exhibition. On November 22, 2017 the evaluation and critique’s panel including Hooman Balazadeh, Shahin Heidari and Rana Saghazadeh participated in the evaluation roundtable of the workshop in the VIP hall of the Post Museum of Islamic Republic of Iran. In this session team leaders and workshop participants heard each jury’s comment on their project and visited the exhibition.

Concluding the overall feedbacks, the final products of the 2nd and 10th group caught the attention of the jury. After a second analysis of energy consumption the 2nd project led by Saeed Partovi in cooperation with the design team members including Adel Afsharmanesh, Mehrzad Esmaili Charkhab, Ali bidram and Sajad Pourhosseini was announced as the final winner.

This roundtable was held with the participation of the manager of communication museum, each team’s member and representative, Engineer Mohamadreza Haeri, counsaltant and workshop strategist, Sadra Boushehri, manager of Youb group and his spouse the the client and her spouse.

On December 4th of 2017, the ceremony of announcement of winners was held in the conference hall of national museum of communication. The session proceeded with the lectures of Engineer Mohammad reza Haeri as the consultant and strategic and social designer of the project and Engineer Ali akbar Nasr Abadi as the representative of evaluation and critique’s panel. During this session in addition to reporting the general energy consumption analysis of the winning project, all the parties involved in “Designing a House for an Architect” workshop were appreciated. Each participating group received a testimonial designed by the Kalk Studio leaded by Engineer Mohammad Ghafari.