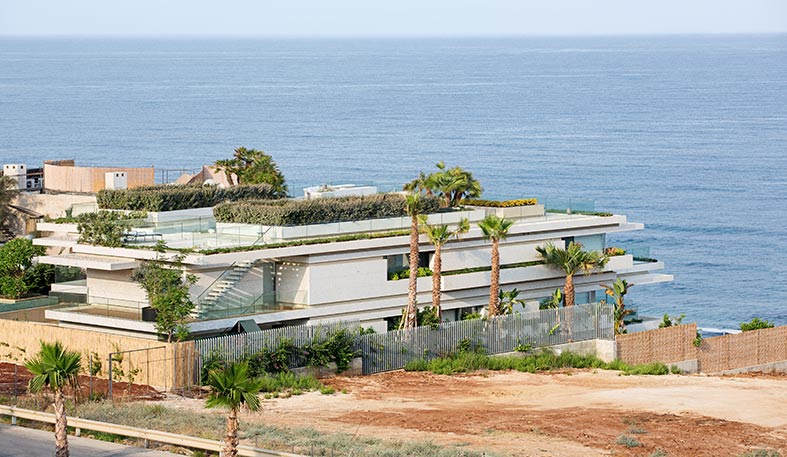 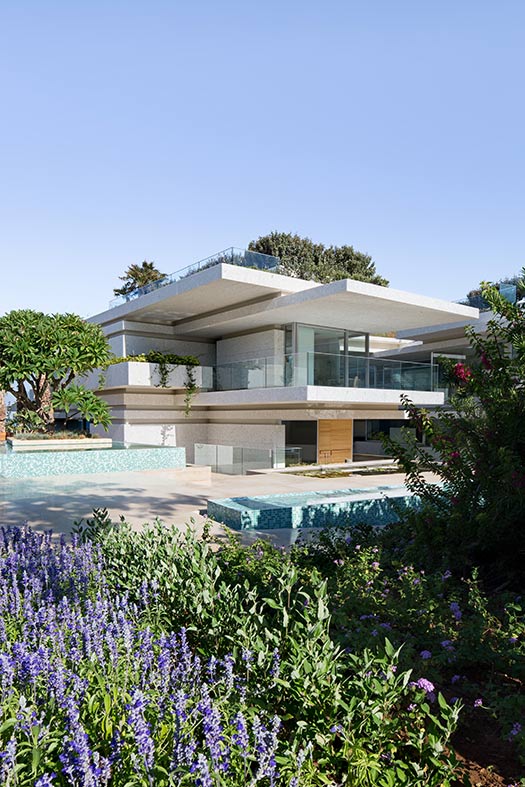 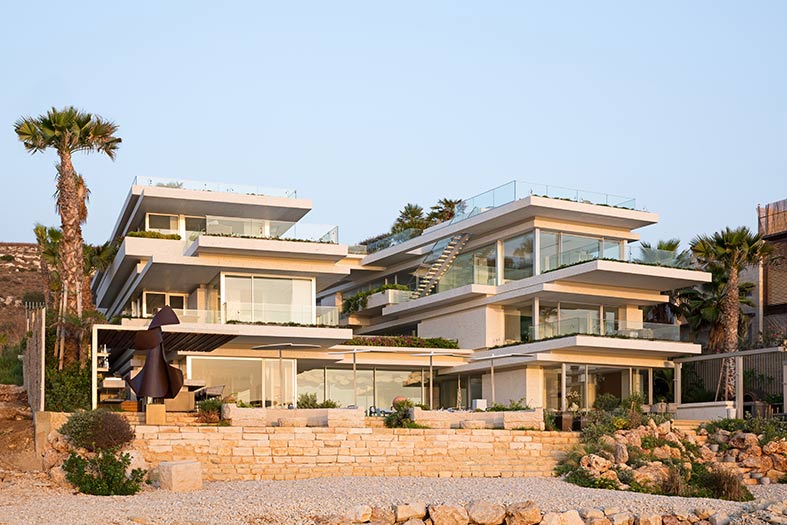 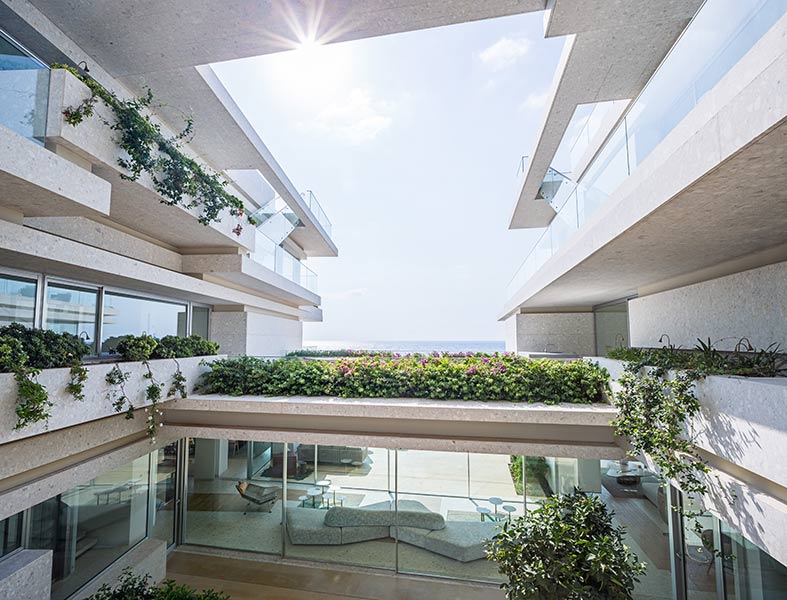 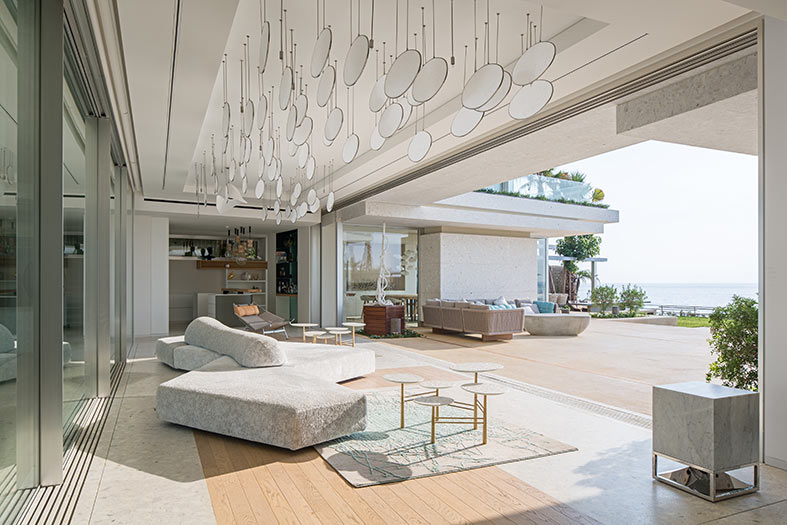 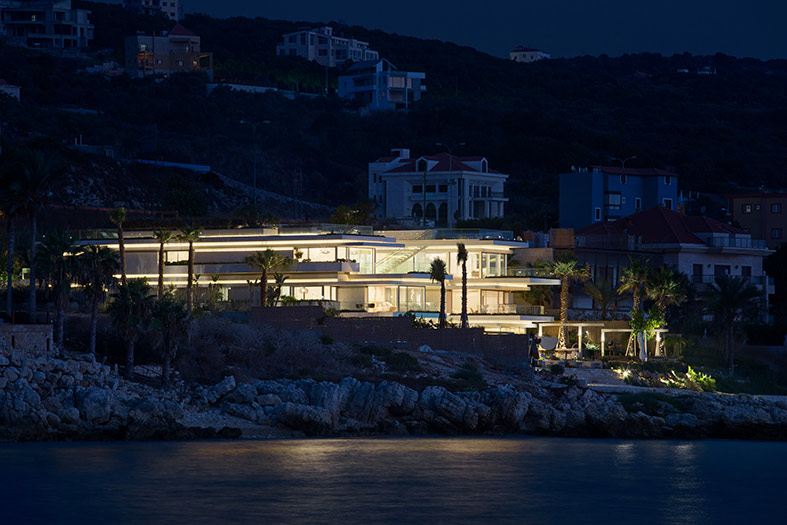 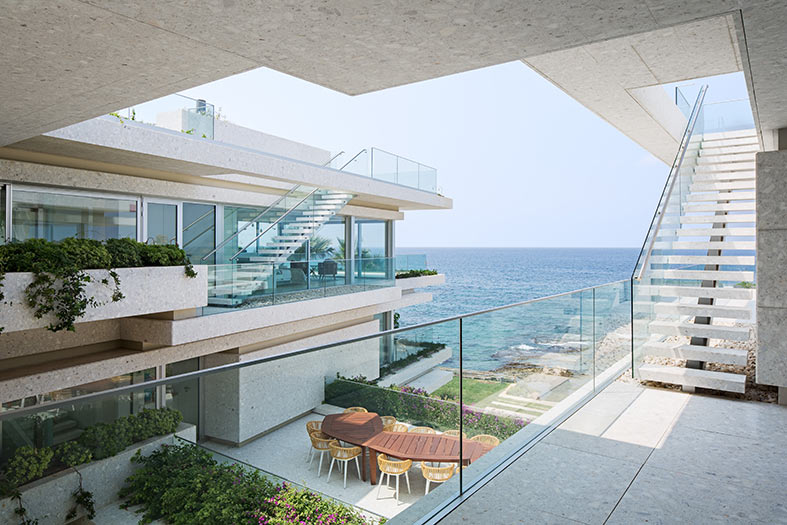 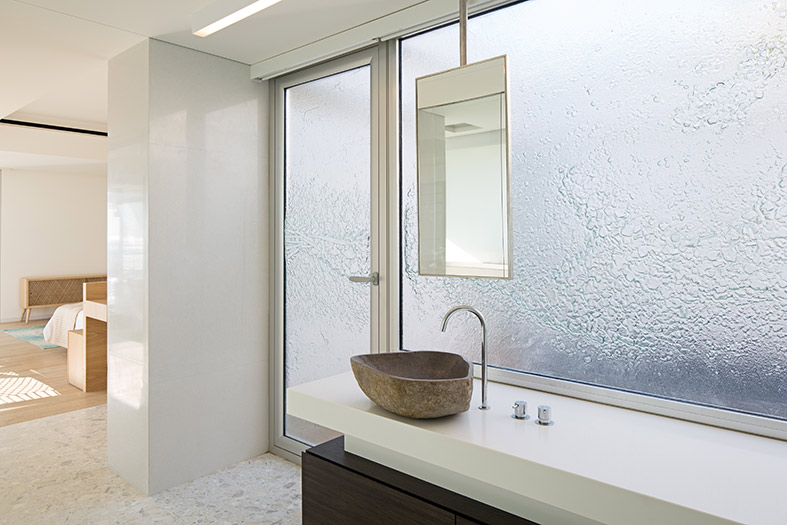 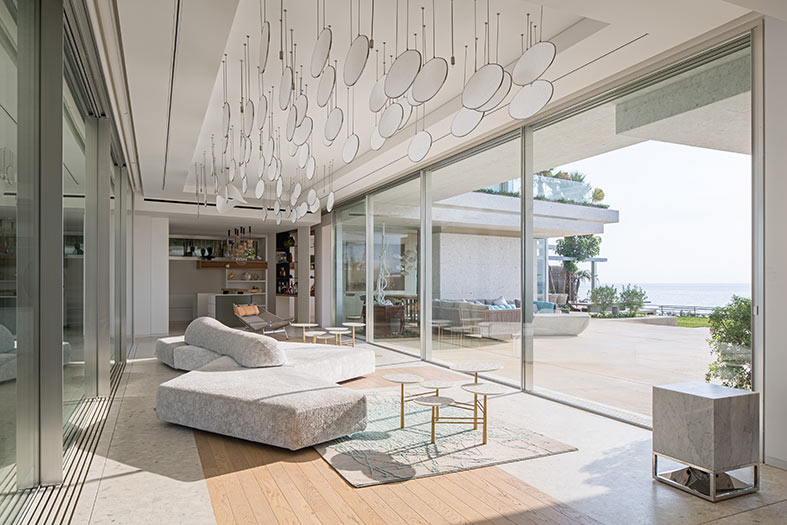 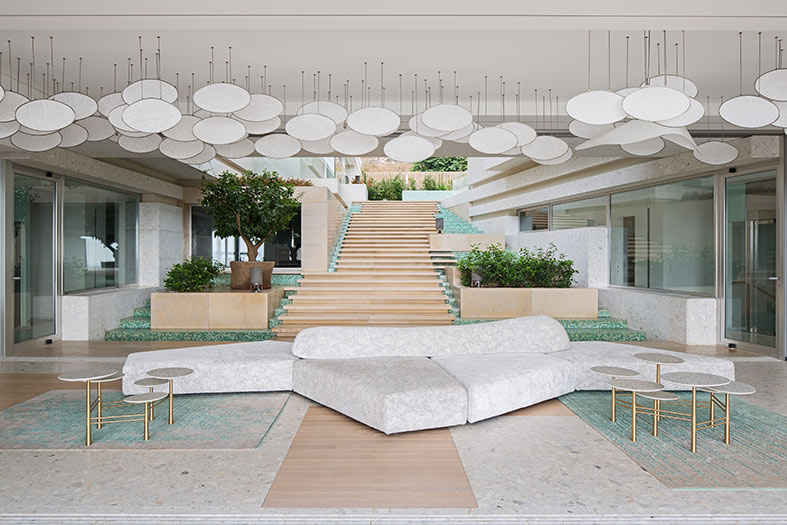 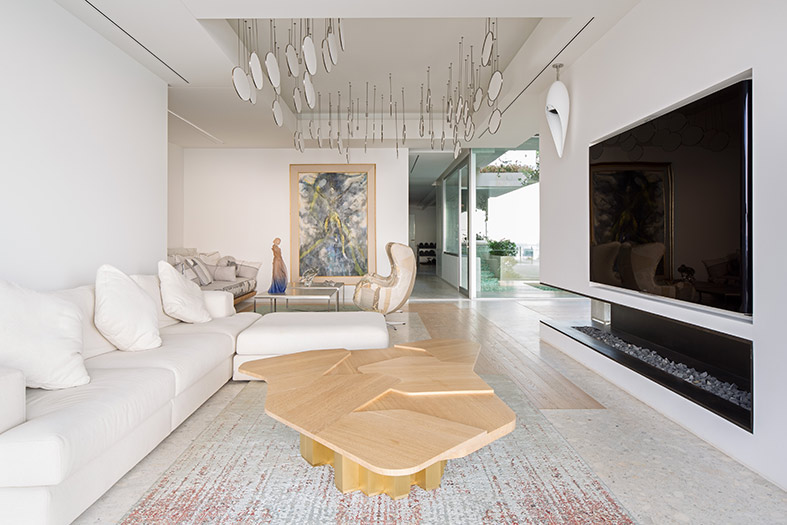 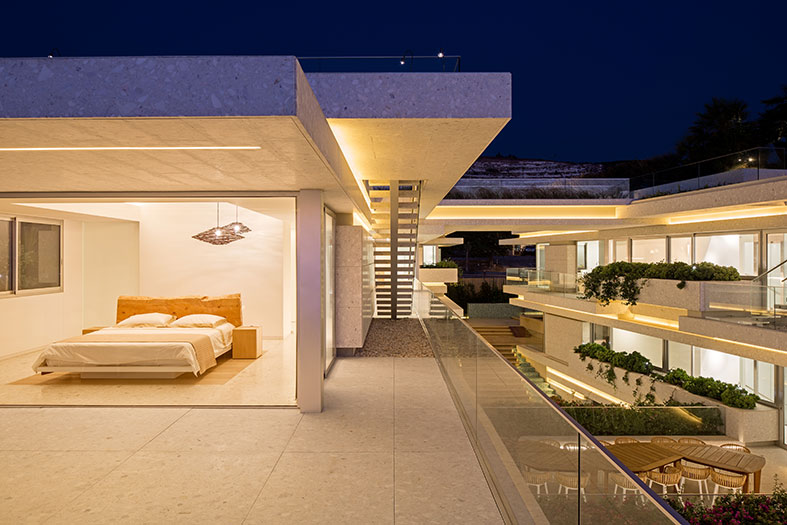 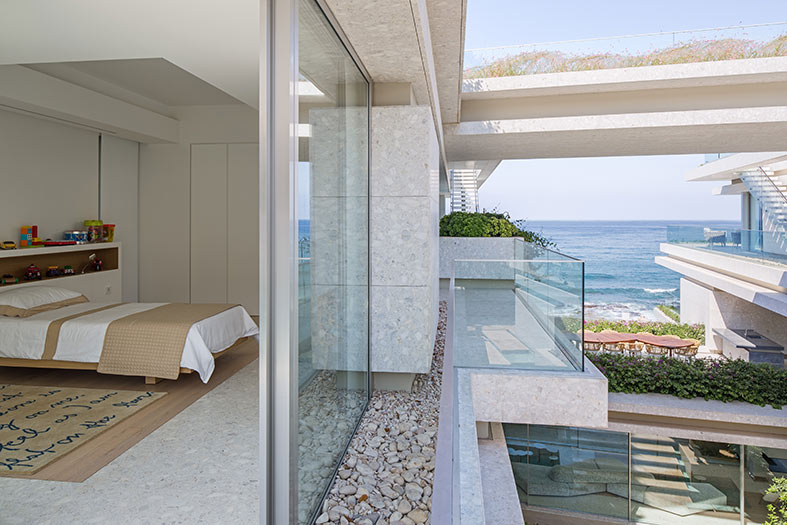 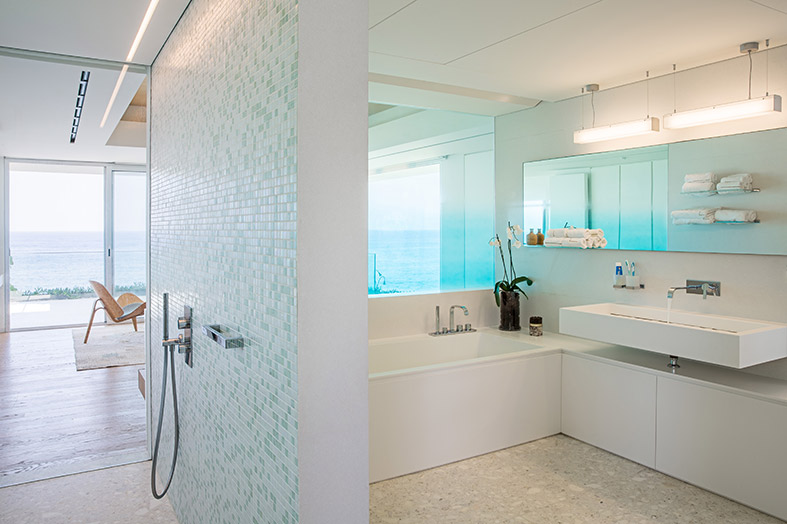 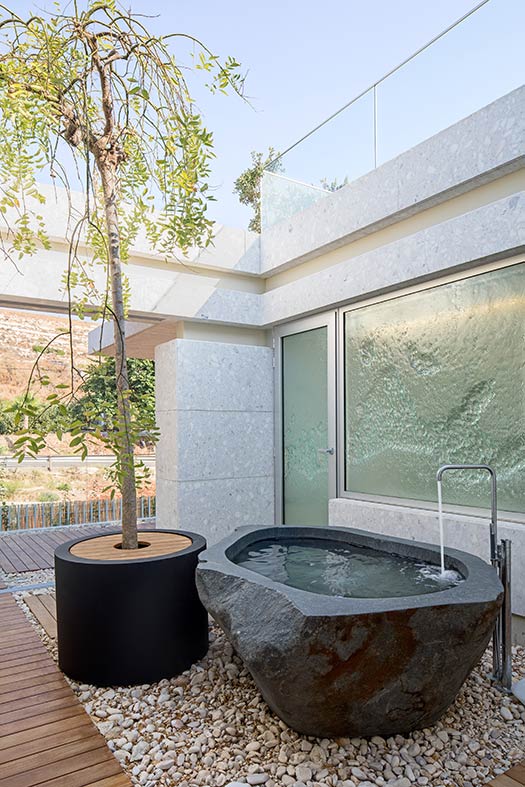 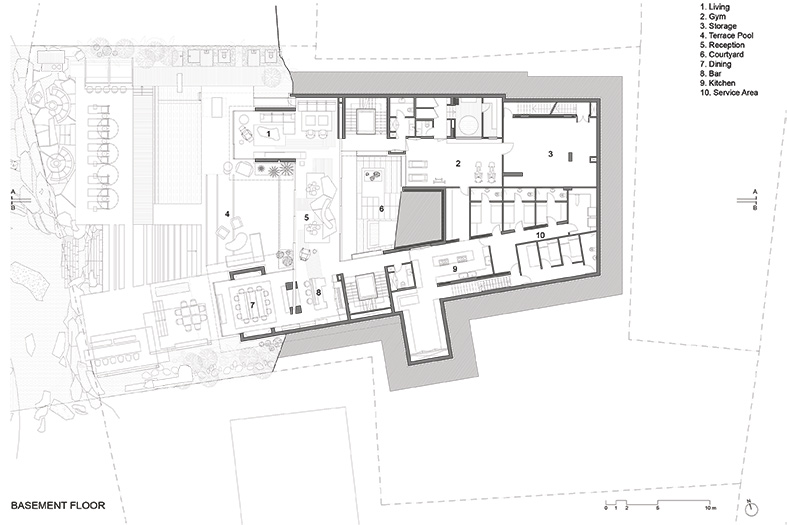 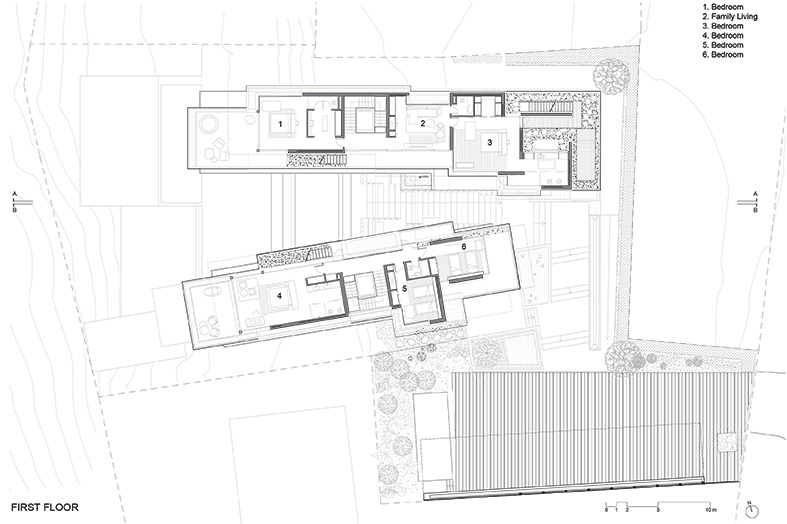 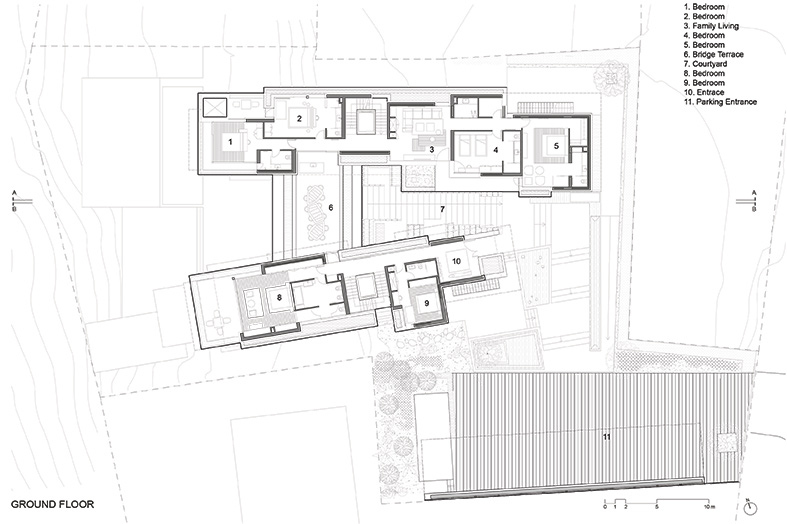 “I would like a house to gather my friends and family for the pleasure of being by the sea, with as many bedrooms as possible.”

“I would like the house to extend into the landscape, possibly to the rooftop.”

“We were particularly inspired by the nearby stratified rock formations, their whites and off-white colors but also their horizontal layering.”

“Eventually, the house is a deep exploration of a very simple palette, the whites of the pebbles, the beiges of the rocks, from the external cladding until the tiniest detail.”

“A project where everything became an opportunity to design, from the landscape to the doorknob.”

El Khalil Beach House (Villa Kali), delivered just in time for the summer of 2016, is a major 2,000sqm, 11 bedroom seaside mansion, designed as a full commission from the architectural scale to interior and furniture design and selection. It is a four-year effort that involved collaborations with numerous designers and contractors that truly inspired the renewal of the possibility of architecture as a total work of art.

Revisiting the traditional oriental home in a seaside setting - a house with several bedrooms that surround an open courtyard with a water fountain - this version of the concept is achieved through a splitting the volumes into two horizontal movements that open up towards the mediterranean allowing for uninterrupted sea views to all spaces of the house. The external void revealed by this split of the volumes reveals a cascading spine with a terraced staircase and water pools that gently fall down from the entrance level all the way to the seaside garden via the bridging reception area. The glazing system in the reception can slide away completely creating a cross-ventilated outdoor covered space that can be inhabited across seasons in the pleasantness of the shade.

The architectural language of the house is inspired by the stratification of the nearby rock formation on the shore, at once graphic and dramatic. The language articulates a series of superposed horizontal planes, thin and extending. Every one of those planes becomes the support for a variety of programs: a lower public level at once internal and external, houses the reception areas, gym area and outdoor pool terraces all the way to the shore. The two upper levels house a multitude of bedrooms with family living areas on both levels and a spectacular mid-space suspended terrace equally open to the back garden and the horizon on the seaside. The final layer of this horizontal composition extends the circulation all the way to the roofs in the form of suspended gardens and outdoor terraces.