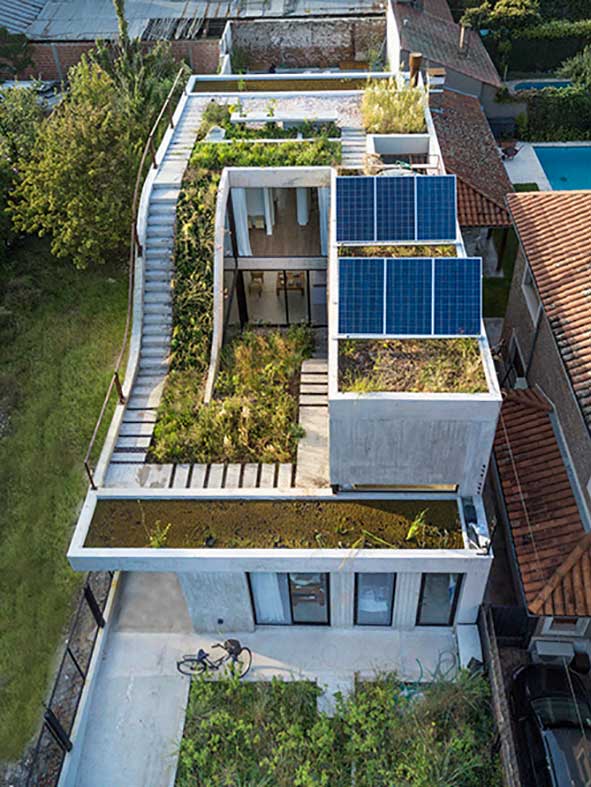 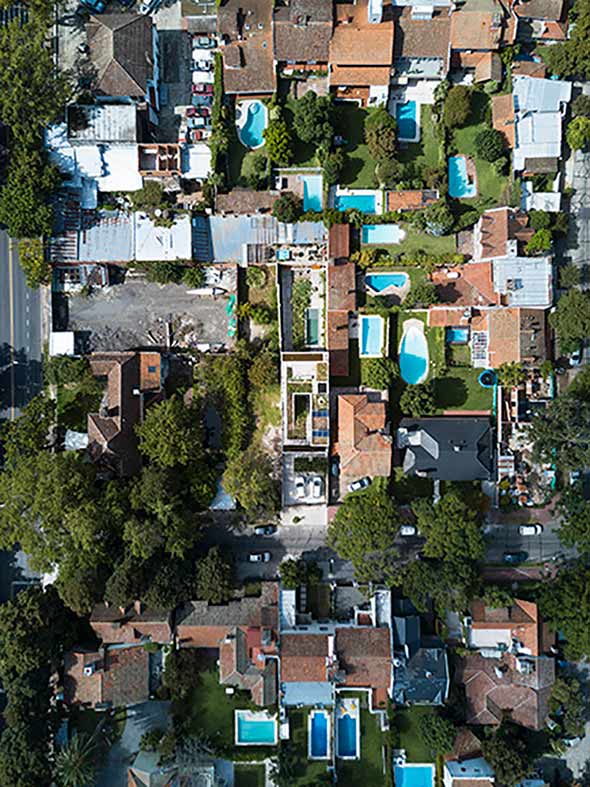 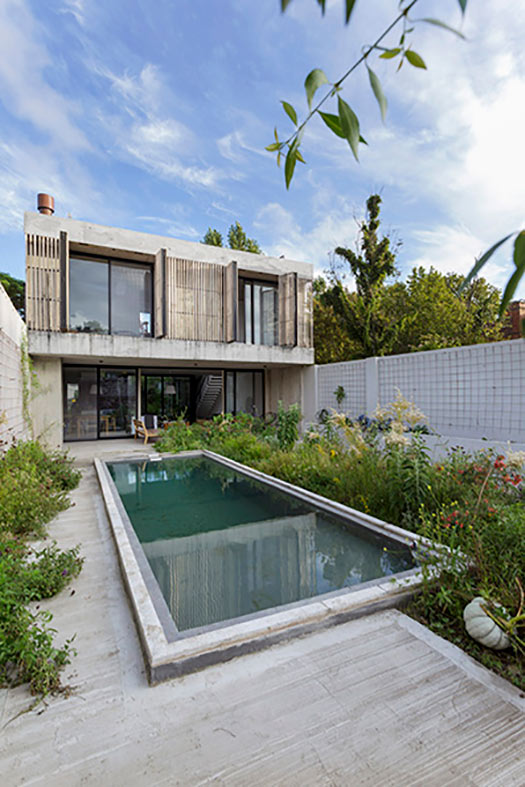 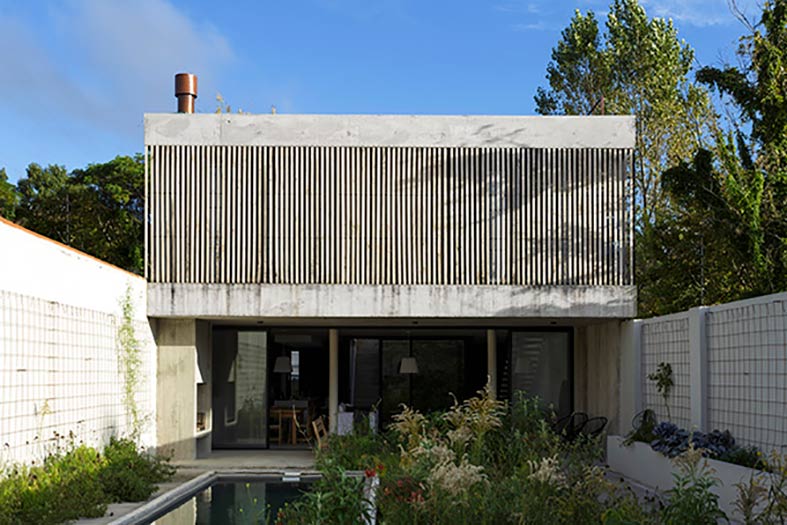 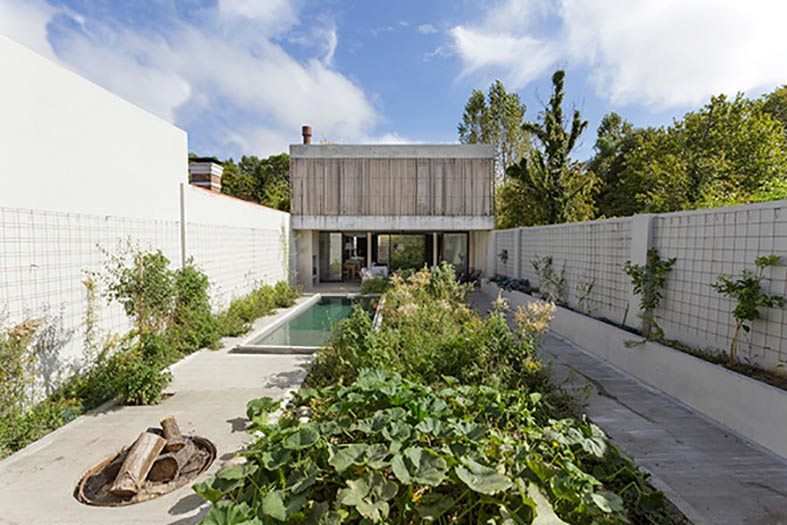 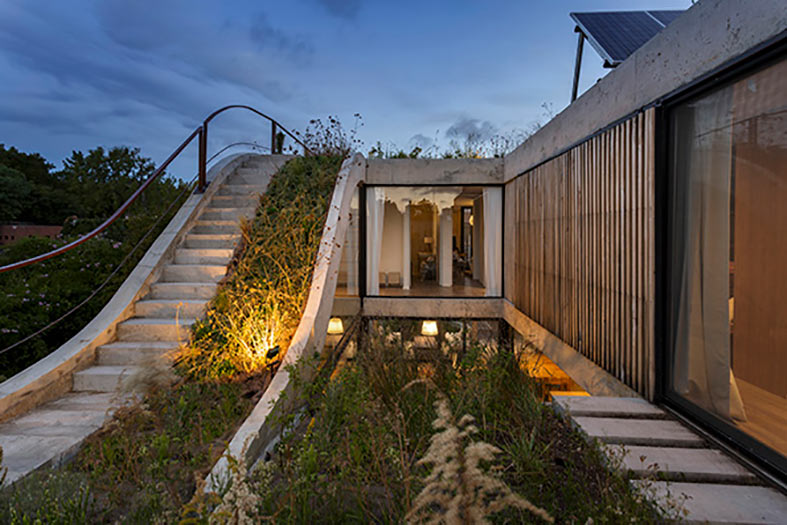 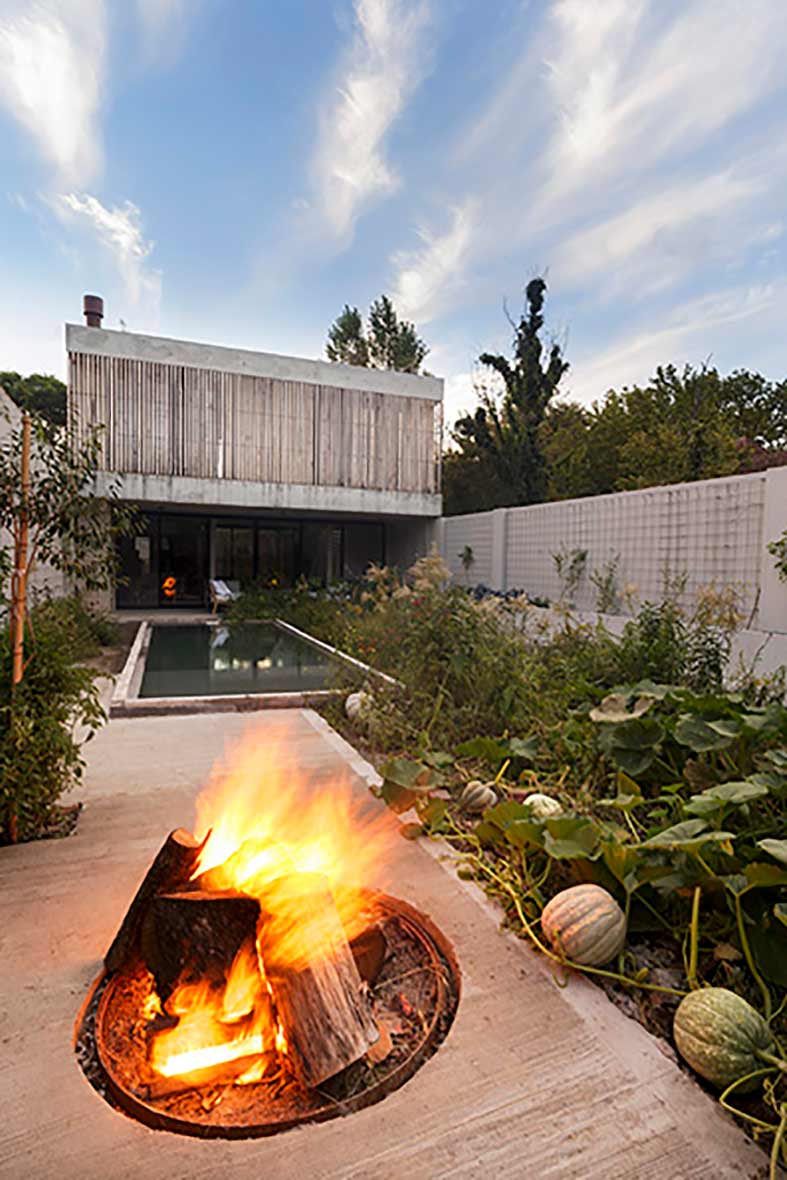 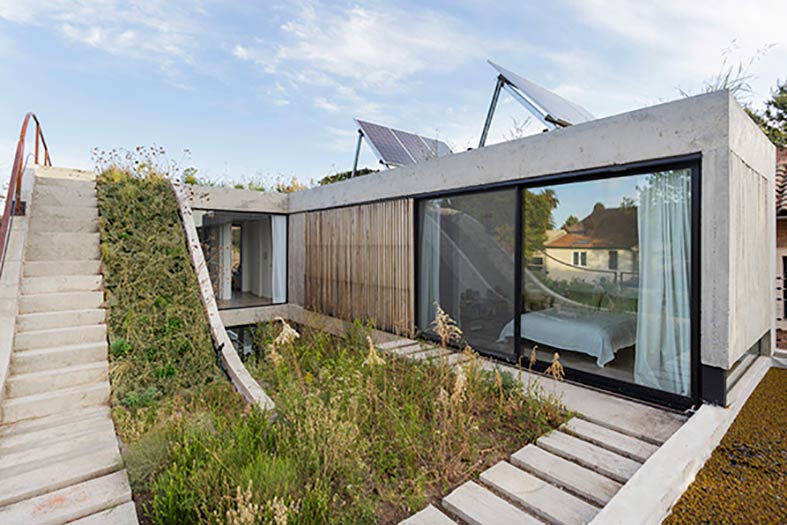 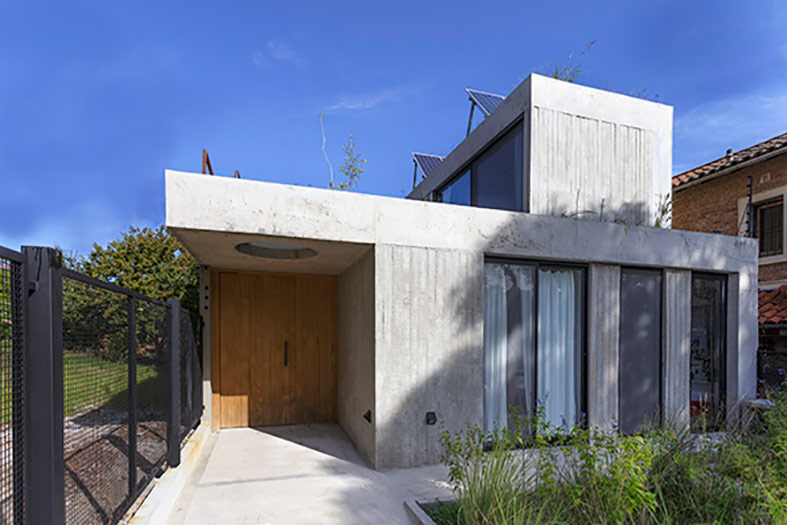 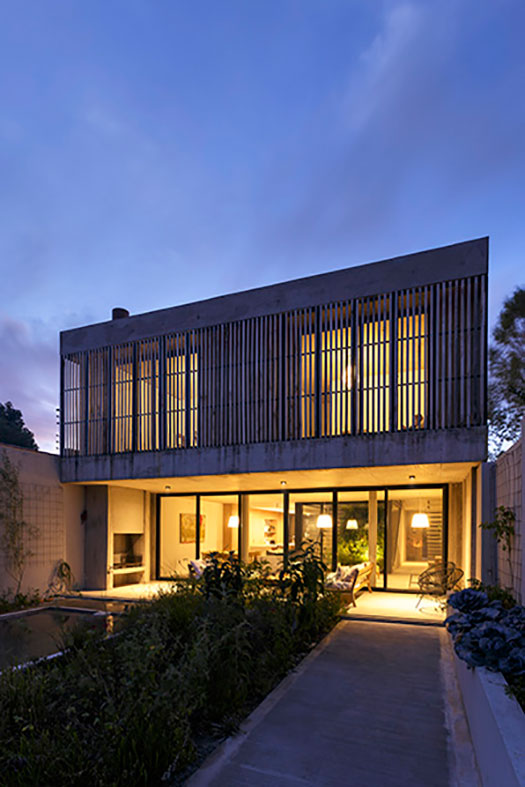 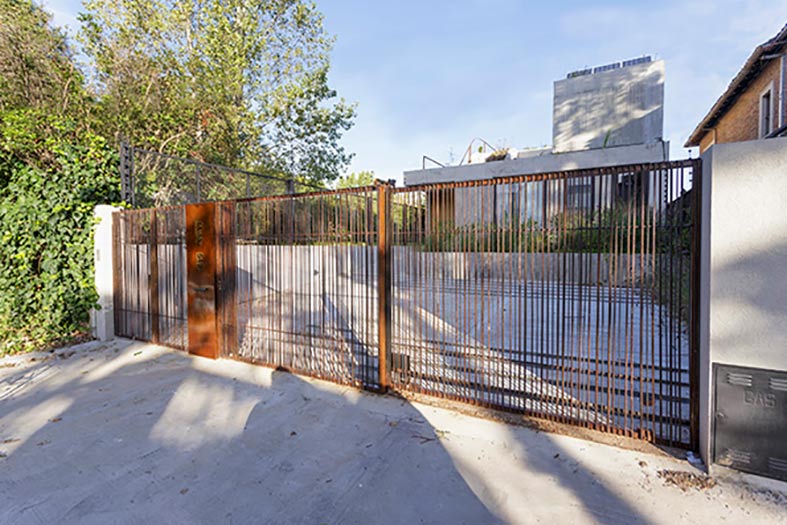 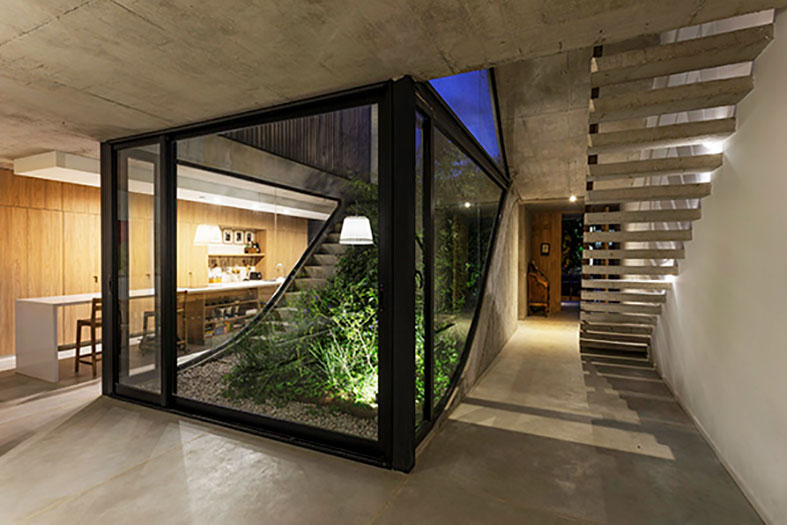 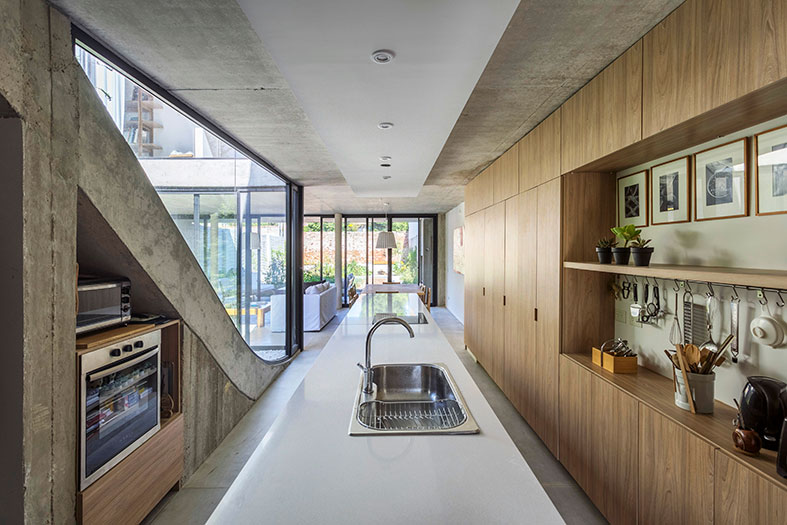 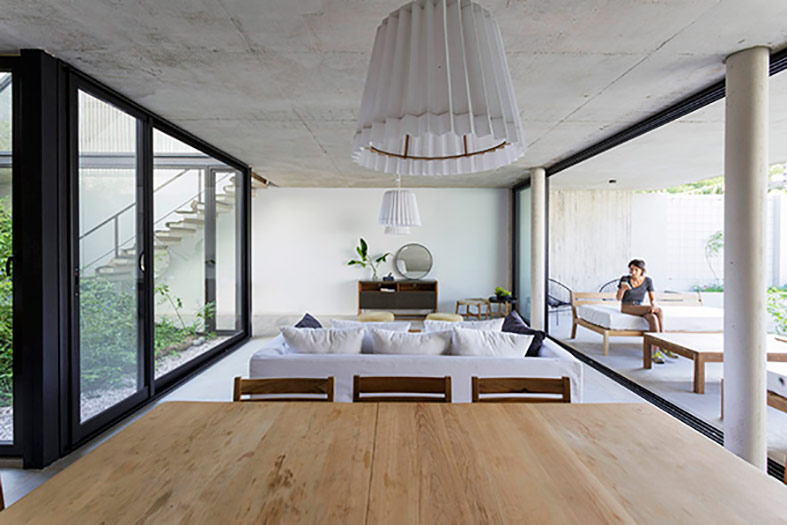 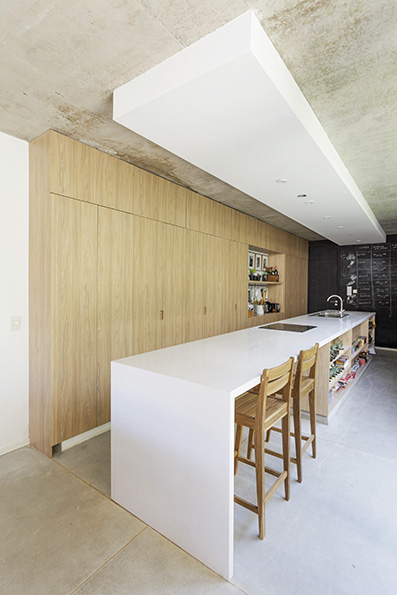 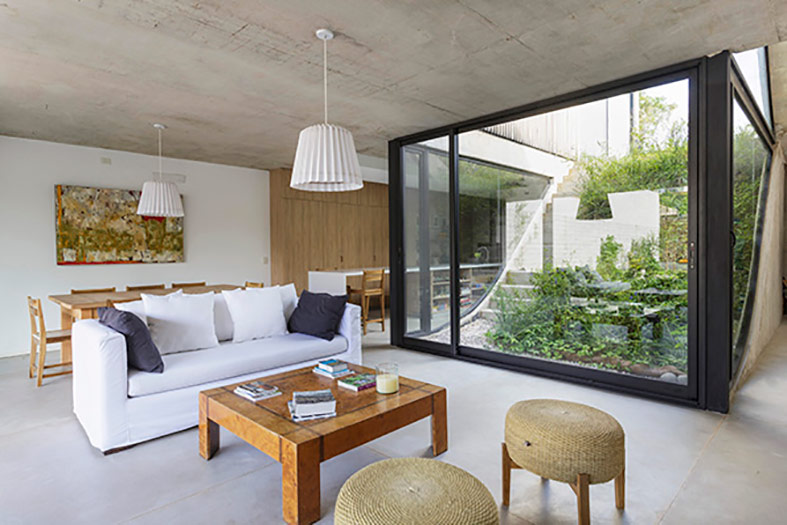 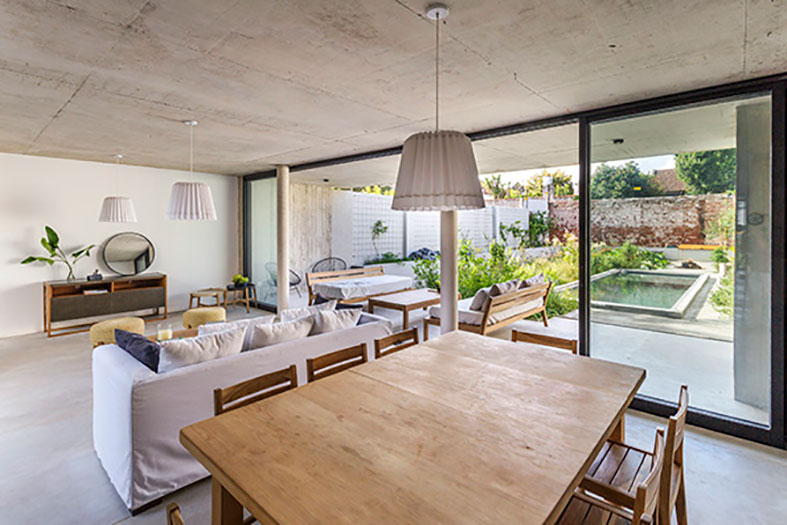 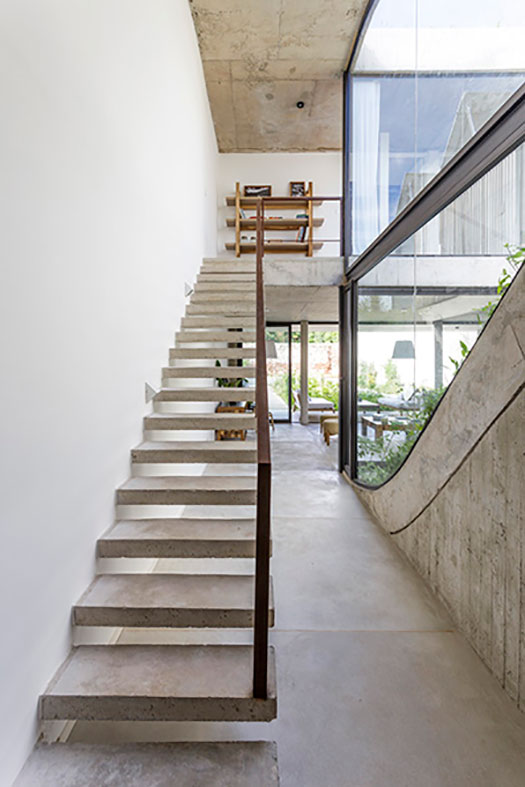 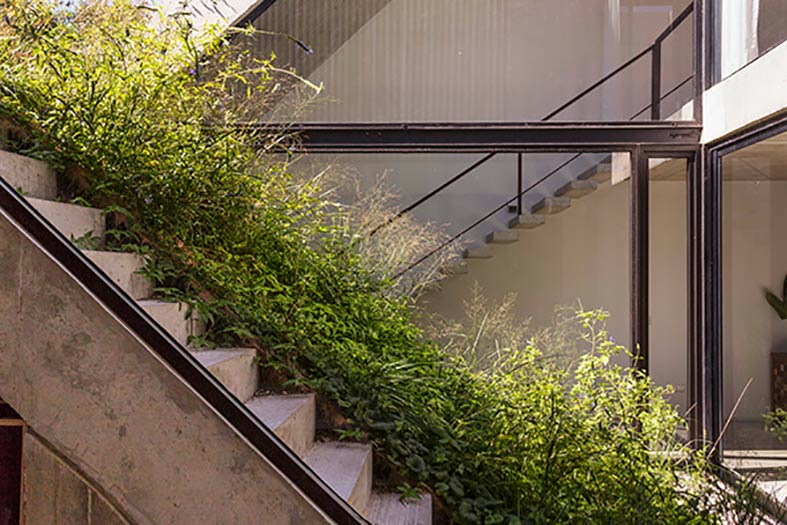 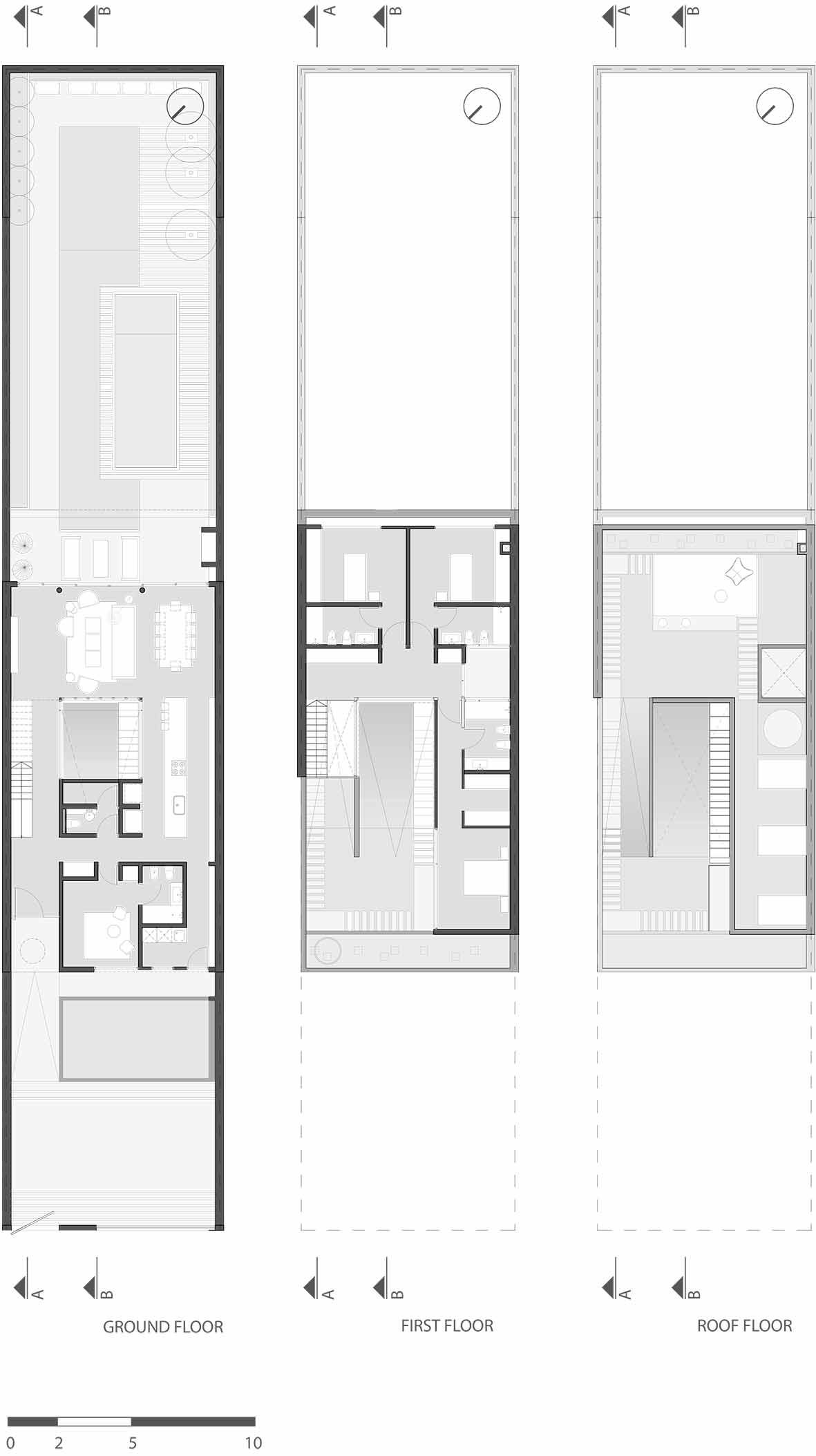 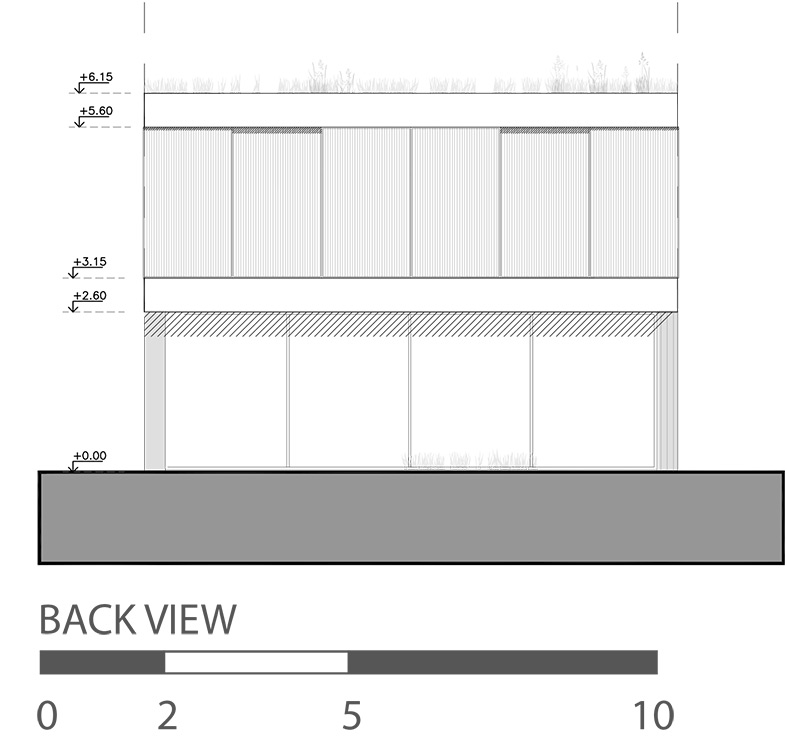 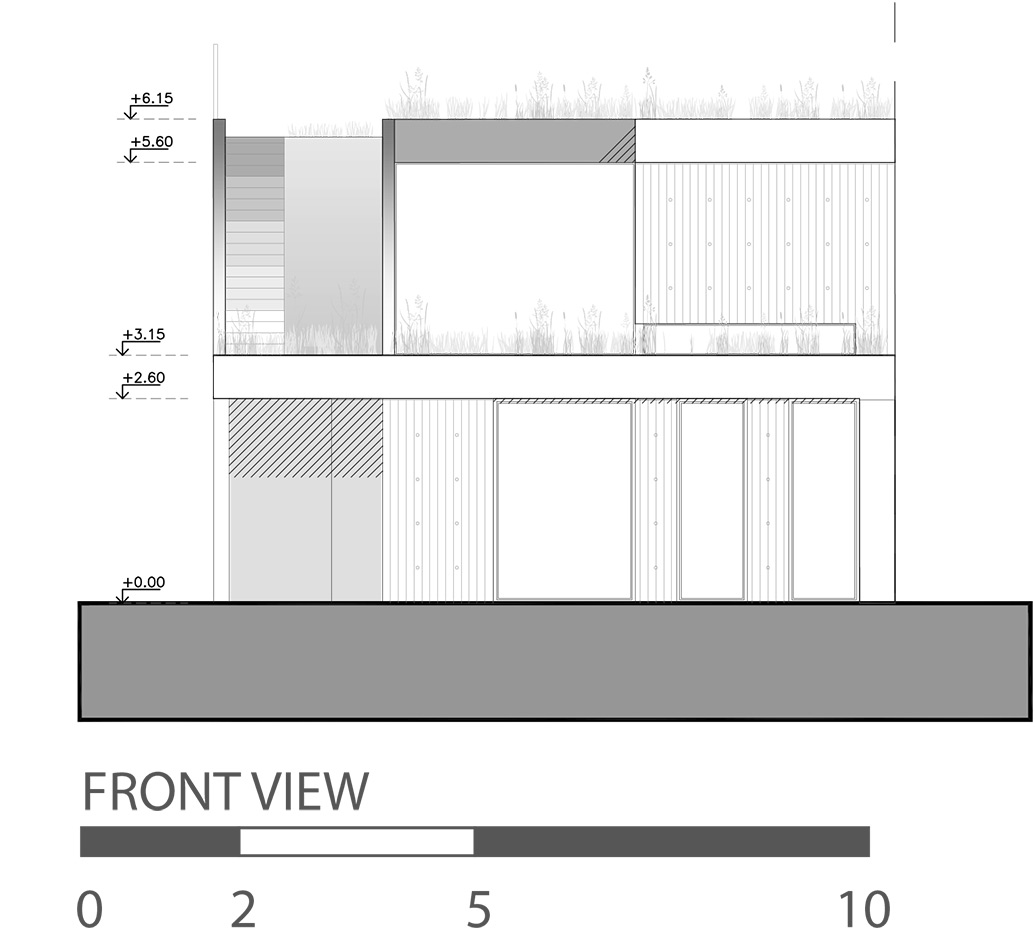 The MeMo villa, which was built on a plot in San Isidro, in the northern part of the province of Buenos Aires, Argentina, was conceived on the premise of a client who is passionate about landscaping and has a strong conviction regarding sustainability and the environment. The premise was to develop a project in a plot between infill buildings while reducing to the maximum extent possible the loss of green spaces due to the construction of the villa.

With such a concept in mind, we at BAM! decided to work on architecture and landscape simultaneously. The square meters of the building footprint turns into a three-dimensional garden which connects all the architectural floors.

The morphological design is born as a result of the commitment not to waste square meters of vegetal soil, on the one hand, and of the idea of having a light entrance through a patio, on the other hand, since it is a plot between infill buildings. Such a layout generates a topographic play with a system of green ramps that connect the zero level with the first floor and the cover, thus creating a continuous garden terrace.

MeMo is a project in which the architectural path plays a decisive role since we have to bear in mind that the habitual and occasional users are offered a sight show. Such a show is not only a fixed image, but rather a series of images that overlap, and each frame of the scene has been carefully thought.

We conceive the sustainability of the project as a path, not as a goal. Hence, we base our path on the LEED standards and we incorporate the concepts of durability and economy which are fundamental in our architectural works, thus satisfying the needs of the present generation without endangering the possibilities of future generations since the impact on the environment and its inhabitants are significantly reduced.

First of all, we approach the path of sustainability by choosing a sustainable lot where the owner can perform most of her activities on foot or on a bicycle, and she can also use native vegetation in her gardens and covers, thus restoring the natural landscape and reducing rainwater effluent.

Then we began the design with a bio-environmental impression, taking special attention to every detail of the project, from the location of the plot, its orientation, the morphology of the volume built with respect to the sun's path and its impact on the different spaces to make the most of the solar energy, the strategic location of native vegetation and the choice of insulating materials of the architectural envelope.

As regards energy efficiency, we have solar panels not only for the supply of electric energy but also for the power for heating, ventilation, and air conditioning. We also add adequate windows with DVH-type glasses which increase thermal insulation. Both of these measures allow us to reduce energy consumption.

In order to provide an ideal indoor environment, our design is based on having the same amount of natural light in all the areas of the villa, cross and controlled ventilation, and constant open views to the garden, which provides better thermal comfort.

Focusing on the materials we use, it is important to mention resources and reuse. At all times we seek to work with materials from the surrounding area and we intend to generate the least possible amount of waste by reusing all leftovers. The clearest example is seen when entering by the garden gate built with the leftovers of the structure. We also designed the collection and separation of recyclable waste and the creation of compost in the garden for all biodegradable waste next to a worm farm. 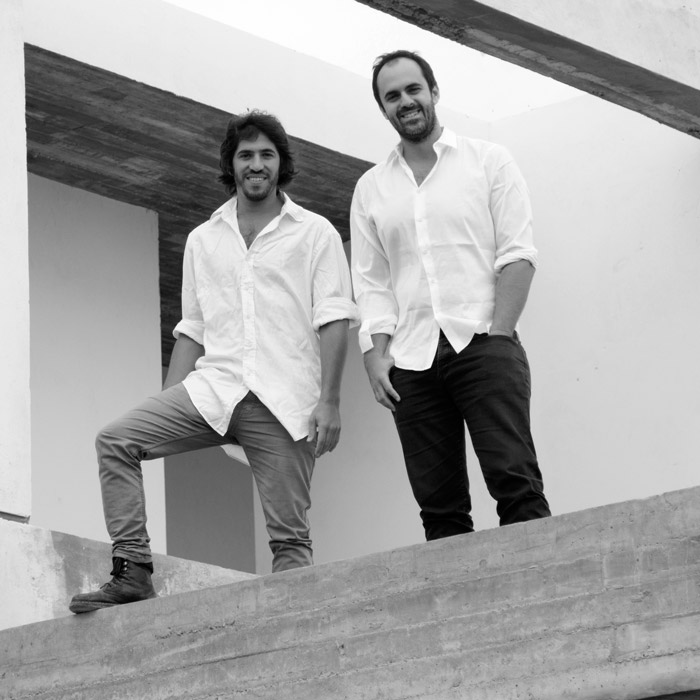