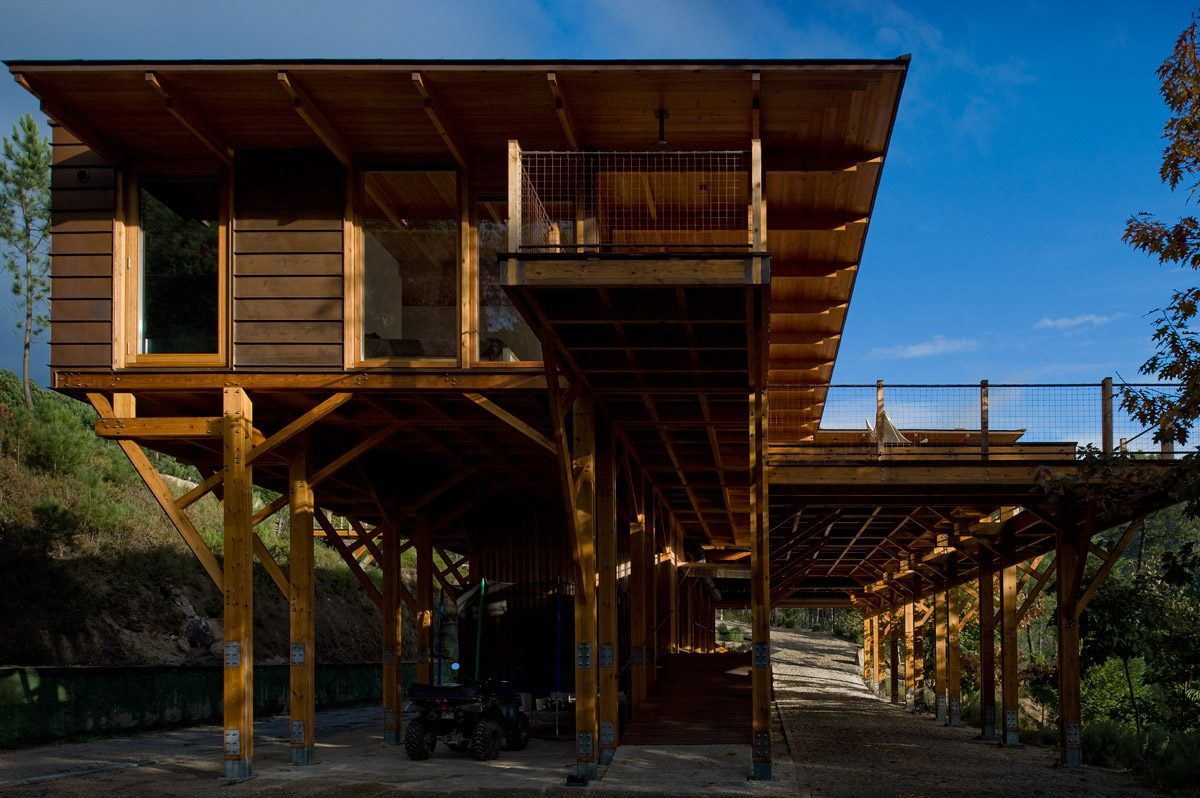 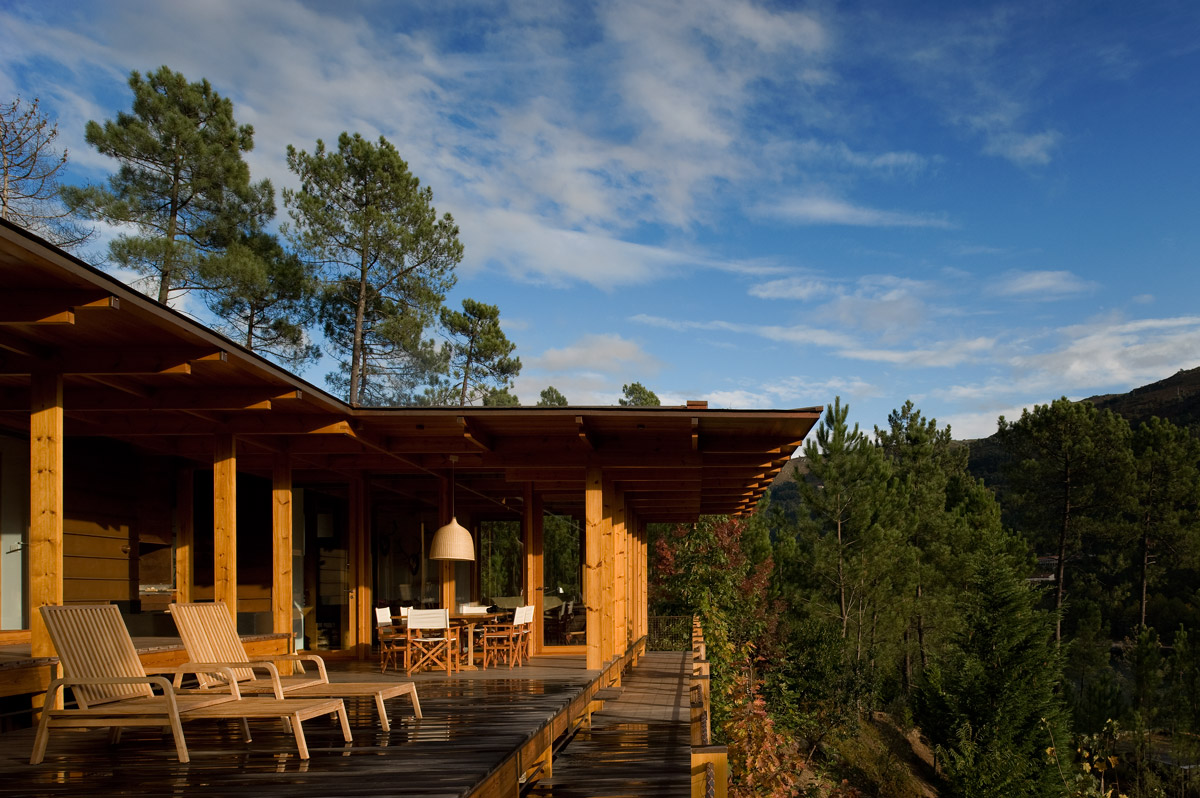 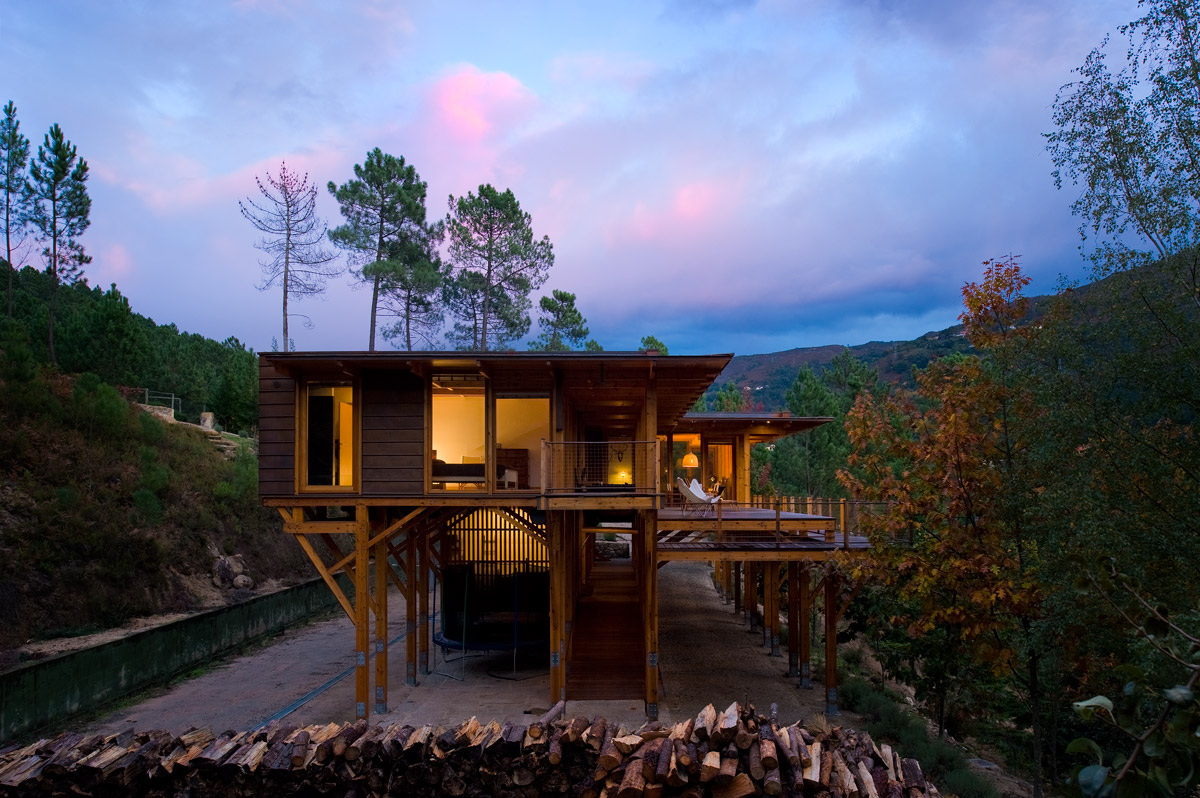 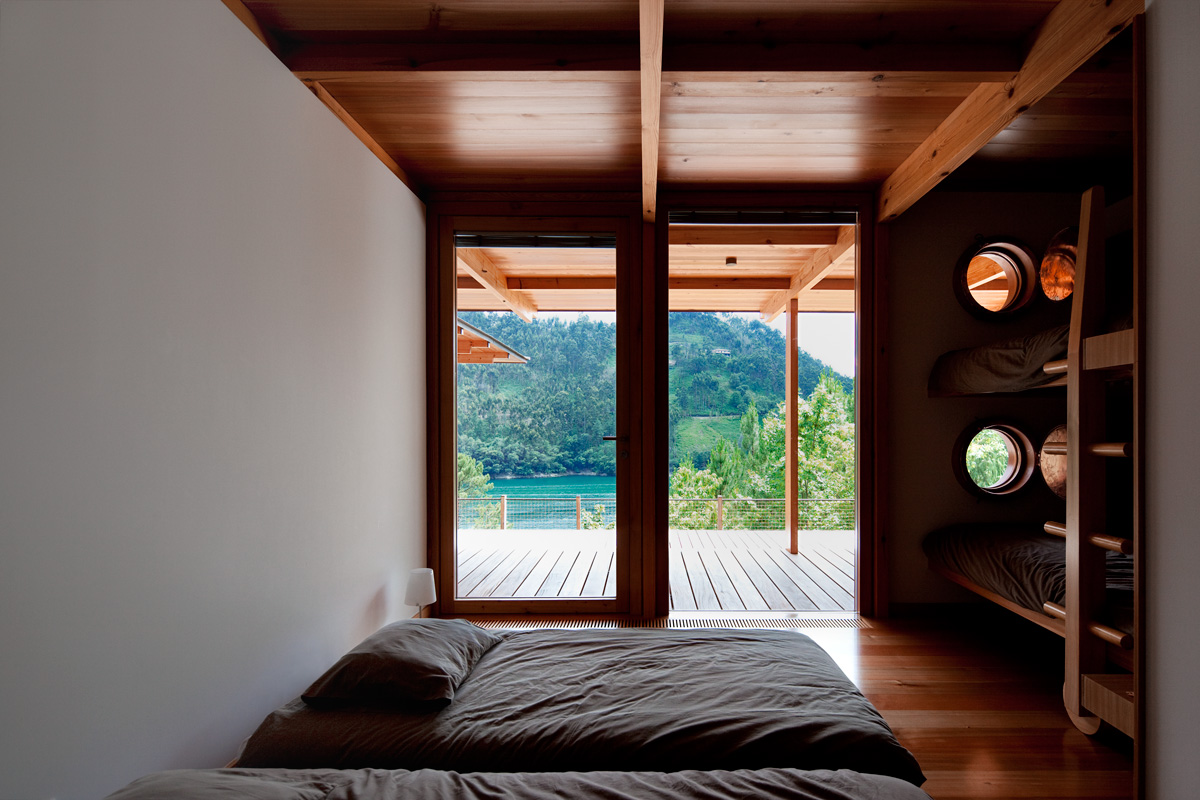 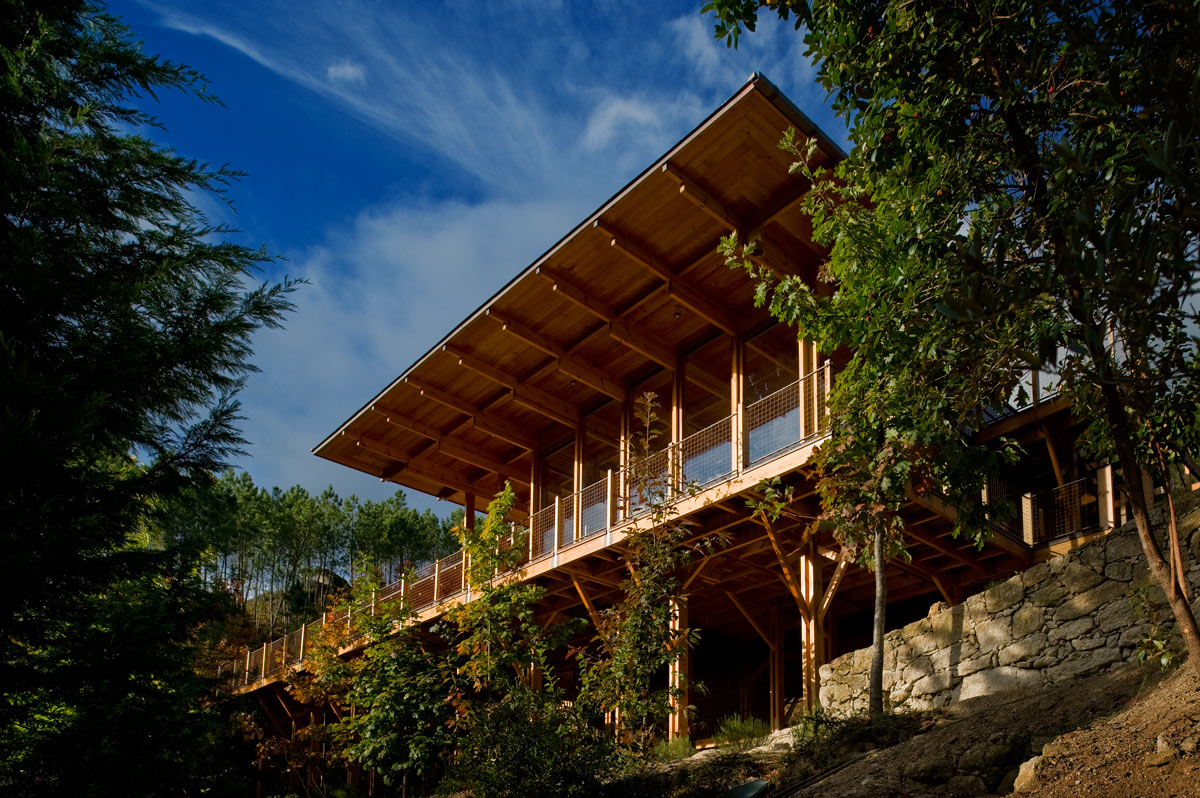 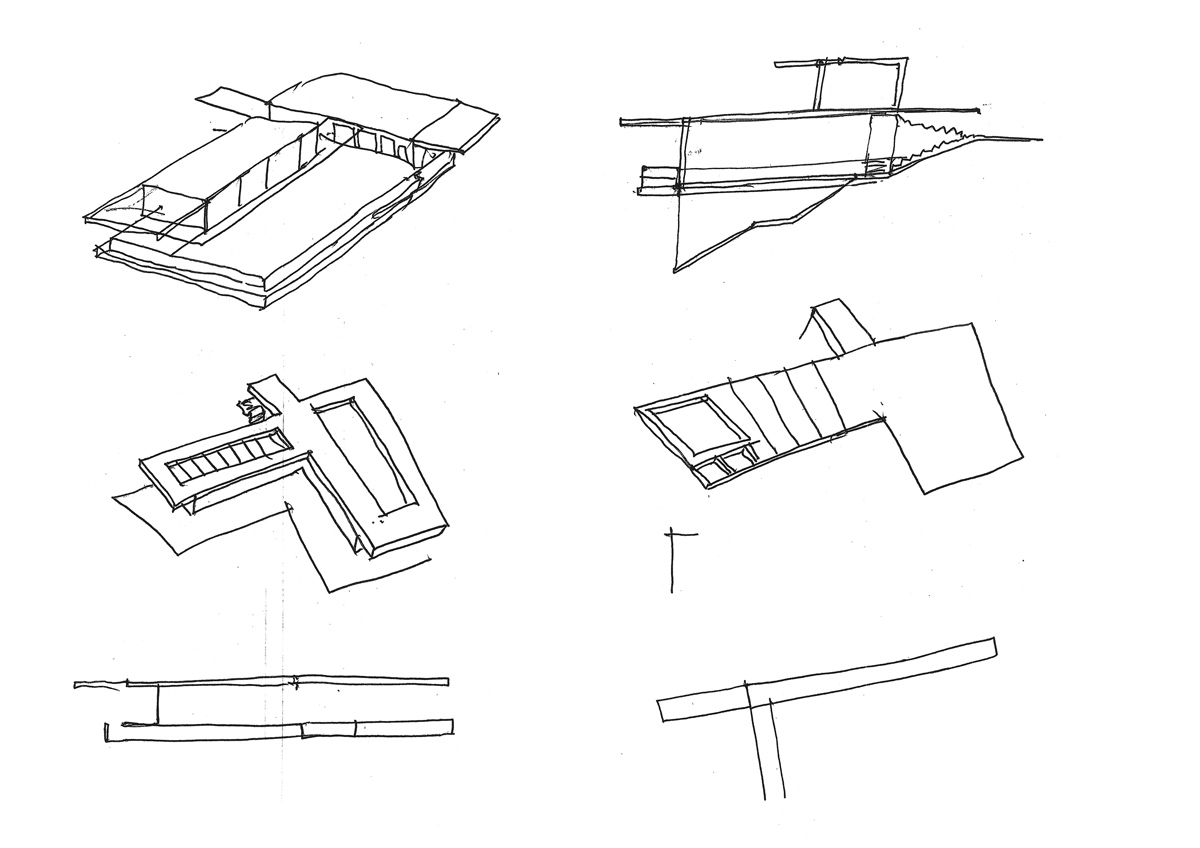 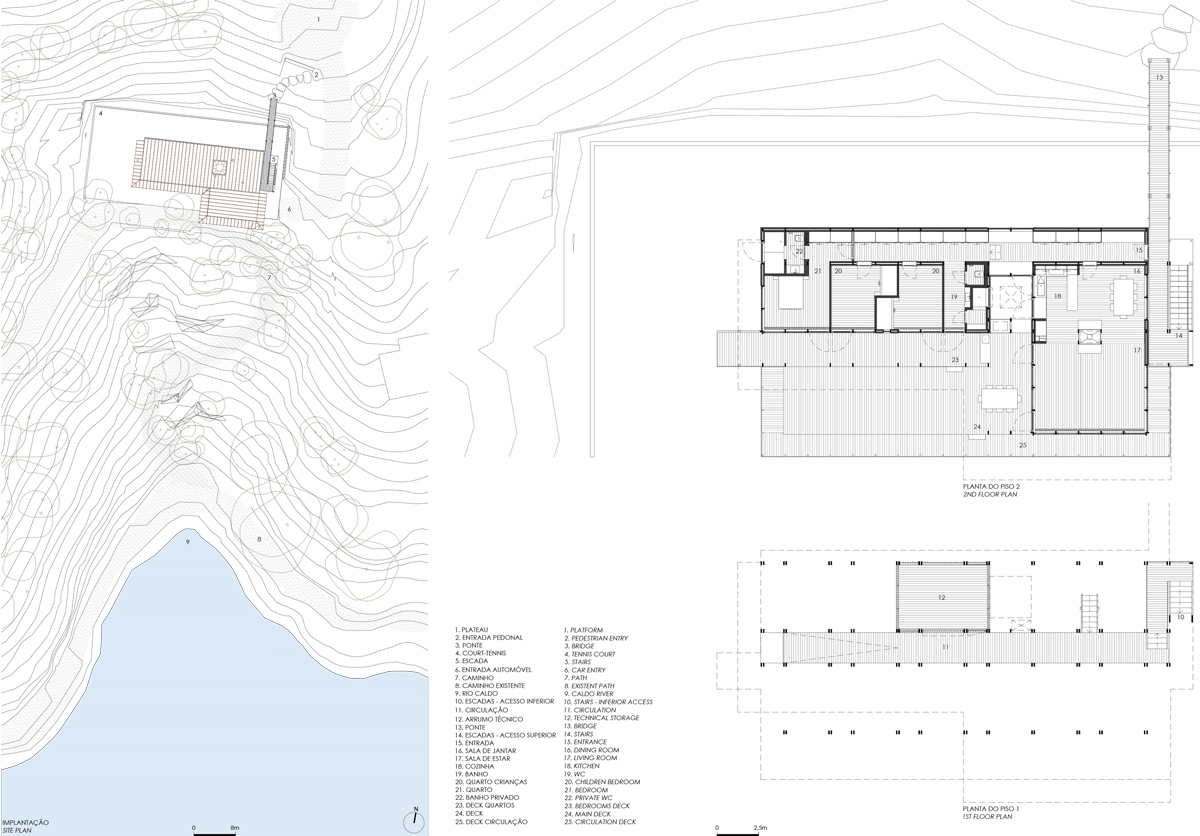 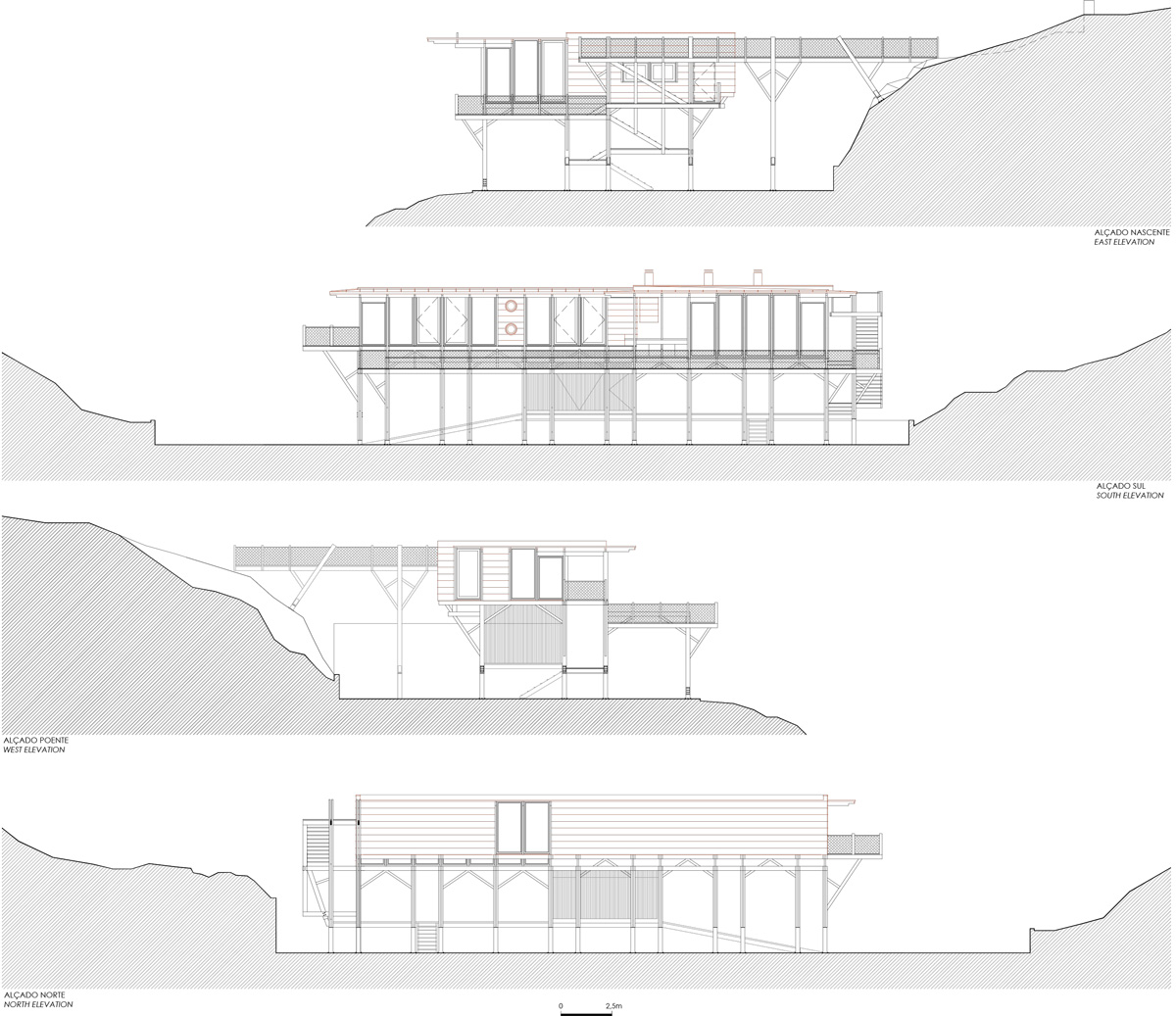 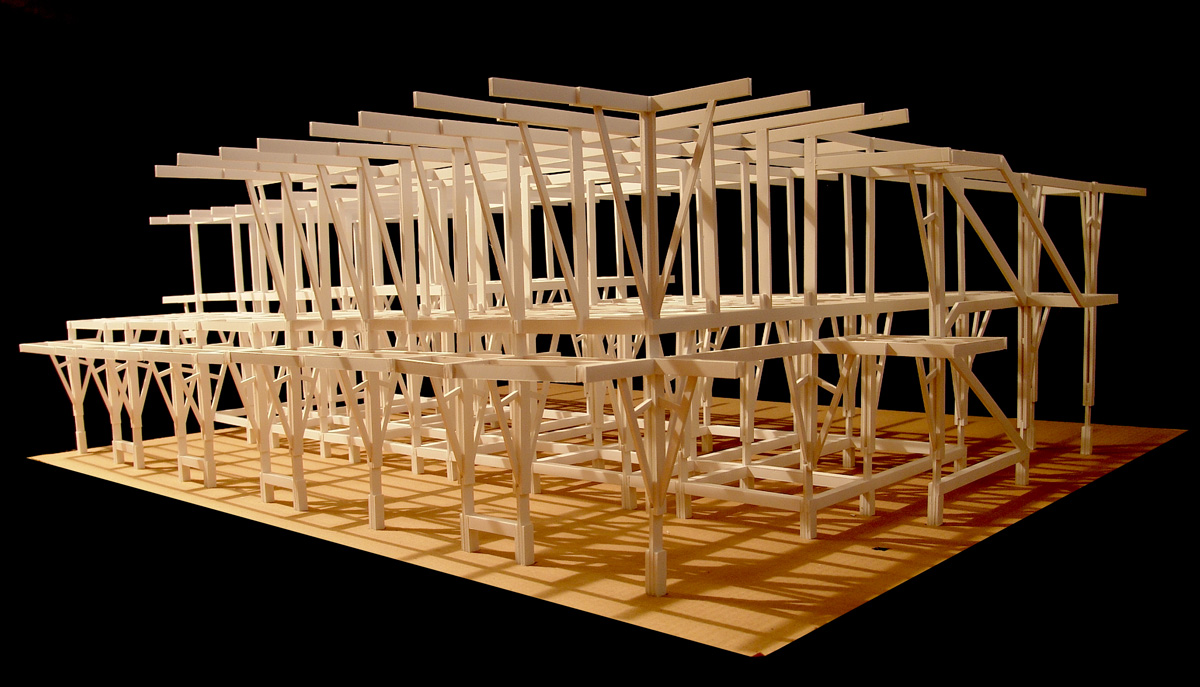 It is said and written, that the idea is to be found in the site and it’s true.

It’s not just the idea, but also the name that comes from the site.

Adpropeixe, which almost seems to be a name out of an Astérix book, is a part of the Gerês Natural Reserve, located in Vilar de Veiga, in the Terras do Bouro district. It’s just there, by the water, after passing the bridges and just before arriving at Gerês; the spa village.

It’s easier to access by boat than by road or cross-country. It is a unique place so the response to the commission also had to be unique and specific: a timber house.

The client, in love with Gerês, the reservoir, and the water, had been looking for a site to buy to hopefully build a house.

After a long search, the chance arose to buy a site, where a tennis court had been built prior to the establishment of the Natural Reserve. This construction was legally and properly authorized at the time.

The pre-existence of this tennis court, which covered an area of 800m2, now allowed under the current regulations for the building of a house of up to 200m2 on the site.

To get there, one has to climb the hill, along a sinuous tarmacadamed road, always rising until, when nearly at the top one starts to go down and down a narrow dirt track alongside perilous drops and stunning views.

The vegetation is dense and rich, although the traces of a forest fire that occurred some years ago in the area are still apparent. The court, a concrete slab painted green with a few white lines, which had once been used for playing tennis, was the only level plane in the whole 14,500m2 site.

Nature adapted itself to this element that was set into the hillside. The court was already within the forest when we first visited the site.

On arriving by the upper path, the view is stunning, taking in the calmest area of the lake and almost allowing a glimpse of the bridges.

On the court or platform, the view is an interior one, as the dense vegetation blocks out the panoramic views.

The idea, obvious as it was, was there:

Arrival from above, elevation of the volume of the house above the level of the platform so as to ensure views into the distance and the use of the platform, the flat area, for service and circulation.

Arriving at the site from an outcrop of rock, access to the house is via a bridge at the roof level. Coming down, one arrives at the main entrance door, which is actually not used very much.

The internal arrangement is simple: from the entrance area, a corridor leads into to the living room and the kitchen and, at a slightly higher level, to three bedrooms with bathrooms.

By placing external circulation on the periphery of the terrace, at a lower level, the visual interference of the necessary guard rail is avoided.

The house, or habitable volume, is elevated over the ground by 52 timber pillars that form an ordering and constructive network.

This same network, or logic, is developed in the construction of the slabs, walls and stairs.

Almost everything has been left exposed, even when covered by thermal insulation or weathering membranes. Inside, the whole structure is seen and felt and lived in.

Concrete footings, (the only concrete used in the building). Steel connectors. Structural frame, internal floors, and ceilings in the red deal, external flooring and ceilings in Cumaru Brazillian Teak. External finishes, walls, and roof in copper. Glass in timber frames. Posts with fixings in copper and a wire mesh of polypropylene nylon form the fencing.

The house in Adpropeixe is a habitable viewing platform, elevated off the ground, but integrated and installed on the site.

The hillside has been cleaned up, water tanks have been built, trees have been planted, the paths improved, Nature has been humanized. 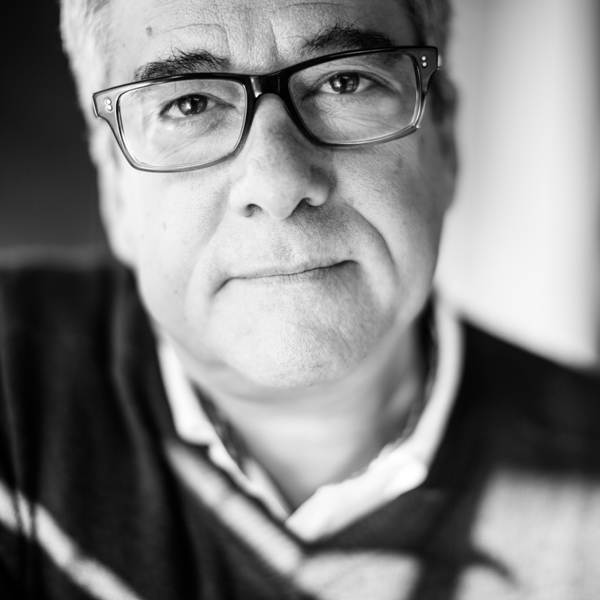