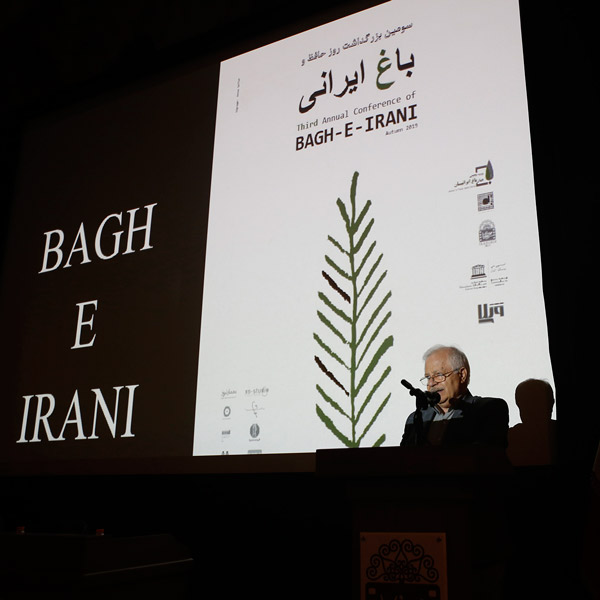 Iranian architects, artists and actors attend the 3rd annual conference of BAGH-E-IRANI at the Cinema History Museum of Tehran, Iran, Oct. 11, 2019.The one-day festival kicked off here Friday, attracting hundreds of Bagh-E-Irani enthusiasts of all art and architecture groups to the cinema museum, also known as Bagh-E-Ferdous.

The third annual conference of Bagh-E-Irani was held by the Persian Garden Research Institute, Elite of Iranian Architecture Society, UNESCO National Iranian Commission and the Villa magazine, to celebrate the material and spiritual dimensions of BAGH-E-IRANI, which bears exceptional, and even unique, testimony to the cultural traditions that have evolved in Iran over some two and a half millennia.

BAGH-E-IRANI, also known as The Persian Garden exhibits an important interchange of human values, having been the principal reference for the development of garden design in Western Asia, Arab countries, and even Europe. Throughout its evolution, BAGH-E-IRANI has had a role in various cultural and social aspects of society, becoming a central feature in private residences, palaces and public buildings, as well as in ensembles associated with benevolent or religious institutions, such as tombs, park layouts, palace gardens, Meidans, etc

Alireza Ghahari, president of the Elite of Iranian Architecture Society, welcomed the guests, praised the exterior scenes of the conference and highlighted the cultural developments of Outstanding Universal Value directly associated with BAGH-E-IRANI.

Well-known figures, academics, art and cinema researchers lectured on the topic of the conference. On the other hand, artists and students sketched the architecture of Persian Garden and the Iranian costume in outdoors garden.

Anousheh Mansouri, director of the Persian Garden Institute, introduced the Persian Gardens registered by UNESCO World Heritage Sites and emphasized on the contemporary and practical look of this ancient Persian pattern.

Amir Abbas Aboutalebi, The chief editor of Villa Magazine, Iranian architect, journalist, and the conference curator, introduced the phrase "Bagh e Irani" instead of "Persian Garden" to the conference. He said, there is wisdom behind the perfect design of "BAGH" which is the original result of an inspired and intelligent application of different fields of knowledge, i.e. technology, water management, engineering, architecture, and agriculture. He then presented "Bagh Ideology" vs "Bagh Typology". "The #BAGH is a paradigm not only of architecture but of ideology; it is a myth of fantasy through which is generated by psychological rather than utilitarian needs.

The Persian Garden is an outstanding example of a type of garden design achieved by utilising natural and human elements and integrating significant achievements of Persian culture into a physical and symbolic-artistic expression in harmony with nature. Indeed, the Persian Garden has become a prototype for the geometrically-designed garden layout, diffused across the world.